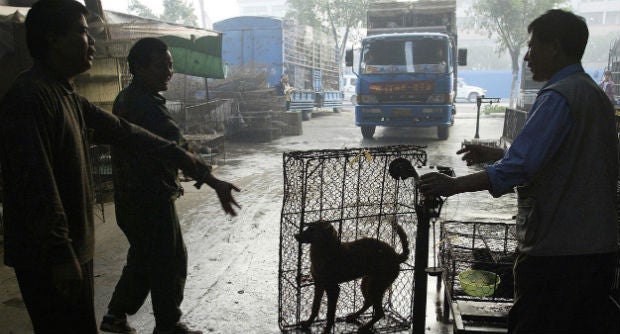 TO GO WITH China-environment-wildlife,FEATURE by Tom Hancock(FILES) This file photo taken on January 6, 2004 shows vendors arguing over a dog destined for the dinner table at the Xin Yuan wild animal market in the southern Chinese city of Guangzhou. The diners of southern China have long had a reputation for exotic tastes, with locals sometimes boasting they will "eat anything with four legs except a table". AFP

CONGHUA – Porcupines in cages, endangered tortoises in buckets and snakes in cloth bags – rare wildlife is on open sale at a Chinese market, despite courts being ordered to jail those who eat endangered species.

The diners of southern China have long had a reputation for exotic tastes, with locals sometimes boasting they will “eat anything with four legs except a table”.

China in April raised the maximum sentence for anyone caught selling or consuming endangered species to 10 years in prison, but lax enforcement is still evident in the province of Guangdong.

The market was the subject of a Chinese media expose two years ago, when a local official told the state-run Beijing Technology Times that its role as a center for animal trafficking was an “open secret”.

The seller, who declined to be named, said making a living from his creatures was getting tougher. “Now it’s governed very strictly,” he said.

But on a recent morning traders were out in force, with hundreds of snakes writhing in white cloth bags and wild boars staring plaintively from wire cages.

Not all the produce is illegal but a huge sign touted giant salamanders, which are classed as critically endangered – one level below “extinct in the wild” – on the International Union for the Conservation of Nature’s Red List of threatened species.

Asian yellow pond turtles were up for sale beside porcupines, most likely from Asia where several species are also critically endangered.

Southern China has long been the center of a culinary tradition called “wild flavor”, which prizes parts of unusual wild animals including tigers, turtles and snakes as a route to health- despite the lack of orthodox scientific evidence proving such benefits exist.

Pangolins – scaly creatures which in the wild lick up ants with tongues longer than their bodies – are protected by the international wildlife trade treaty CITES, to which Beijing is a signatory.

But in parts of China they are prized by new mothers hoping to produce milk, and have become the focus of a vast smuggling industry stretching across Southeast Asia – estimated to traffic tens of thousands of the animals each year.

Beijing first enacted laws in 1989 forbidding trade in scores of creatures including the Chinese pangolin, but has long struggled to enforce the ban as a booming economy has boosted demand.

In April, the country’s rubber-stamp parliament approved a new interpretation of the 1980s law which could see jail sentences of up to 10 years for those caught eating endangered animals, as well as for sellers.

Jill Robertson, CEO of Hong Kong-based charity Animals Asia, described the enhanced penalties as a “positive step” but added that “enforcement must be strengthened, and public education and awareness greatly enhanced”.

“The illegal wildlife trade in general has become a multi-billion dollar business in China,” she said.

But there are signs the threats and increased penalties are having an effect.

Last year, a chef surnamed Wang told AFP that his restaurant sold pangolin for 2,000 yuan per half kilo, adding: “We usually braise them, cook it in a stew or make soup, but braising in soy sauce tastes best.”

But when AFP recently contacted around a dozen restaurants specializing in “wild flavor” none admitted to selling the meat.

But Tian Yangyang, a researcher for Chinese advocacy group Nature University, pointed out that Guangdong eateries do not generally advertise endangered species but offer them to trusted customers on secret menus.

Last year, he sneaked into Guangdong restaurants where he found that eagle and swan were widely available.

“I am not optimistic the rules will be enforced, because the legal system in China is still not very robust,” he said, adding that the trade in protected animals “is getting worse, because it has been driven underground”.

For other species, trade is unabated, and at a Guangzhou roadside establishment specialising in snake stew, live king cobras in cages were bestsellers.

The animals are classified as “vulnerable” on the Red List due to habitat loss and “over-exploitation for medicinal purposes”.

“Eating this kind of snake is good for the throat and head,” said a 17-year-old customer surnamed Wang, as white-hatted chefs decapitated and sliced them up behind a transparent plastic screen.

“I didn’t know they were endangered,” she added, before tucking in enthusiastically.