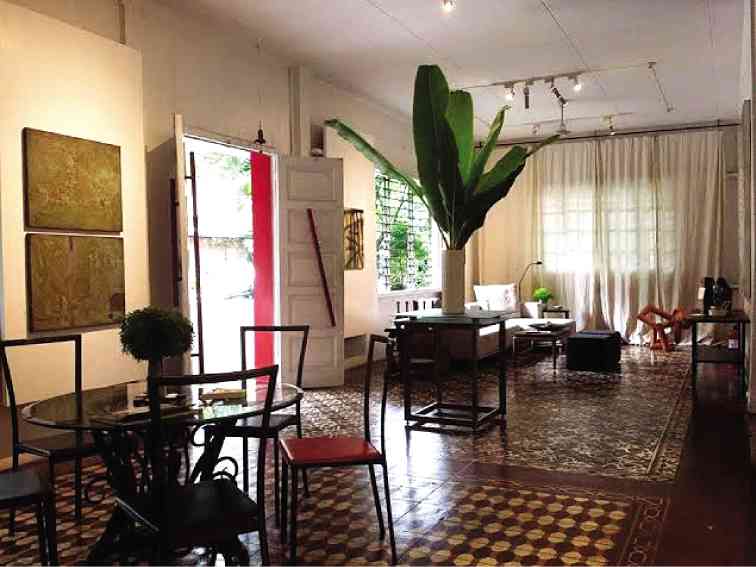 OPEN layout on the first level is inviting.

This haven of culture in the city is worth the trip

Stuck in the city for the weekend, I was itching to find a creative way to disconnect from the urban chaos that hounded me during the workweek.

Respite came in the form of a text message from Albert Avellana, proprietor of The Avellana Art Gallery in Pasay City. It was an invitation to the opening of an exhibit of a new artist discovery of his, and also to celebrate his own birthday.

It was an invitation not to be turned down.

First, Albert is one of the movers on the local art scene, having made his gallery the starting point for many new and now highly successful artists.

The Avellana Gallery is set in a beautiful 1950s home in a compound with huge trees right smack in the decadent, noisy city of Pasay, which makes for an interesting contrast.

Upon entering the gates of the compound, you leave the stress of the modern world behind as you are transported to a place where you can actually sit outside or by a window and be cooled by nothing more than a fan on high ceilings.

Of course, Albert also throws a mean party, with free-flowing wine and snacks, and guests can go from room to room or just shoot the breeze outdoors.

Art has always been his advocacy, he says. “My gallery has always been there to support artists. I enjoy doing art programs. At a young age,  I have always been involved in the different forms of art—music, theater, culinary, art direction, design, television production and more.

“My father, a sound engineer for films, had a very strong influence on me. He just loved art.”

It was in 1991 when Albert decided to just focus on visual arts, starting with an art brokerage and then eventually opening the gallery in 1997. “The houses here were built in the 1950s and intended for rentals,” he says. “At first it was used more as a bodega with about four residents using it as homes. It was the old trees and this house that made me decide to open the gallery.”

Wandering around the compound, one immediately understands the charm of the place, although from an original number of 20 houses, it is now down to less than 10, with the construction of a boutique hotel underway.

Despite heavy traffic on some days, it is still a destination worth the extra effort. The gallery has attracted a loyal following and support group. For several years, Avellana has collaborated with The Manila Peninsula for The Pen Academy, a special program the hotel offers to guests interested in Filipino arts and culture.

Gallery visitors are warmly welcomed by an accommodating staff (including Avellana himself, who also holds office there). The staff won’t hesitate to tour guests around.

I remember the first time I visited the compound several years ago. I also had a chance to visit the showroom of Eric Paras (two houses away from the gallery) to shop for some of the most exquisite home accessories.

Fashionistas know the atelier of fashion designer Jojie Lloren is also in the compound, so one can go “house-hopping” for other interesting stuff.

If you’re hankering for an aesthetic “escape” from the dreariness of the city, then make Avellana Art Gallery and its creative neighbors your go-to haven.