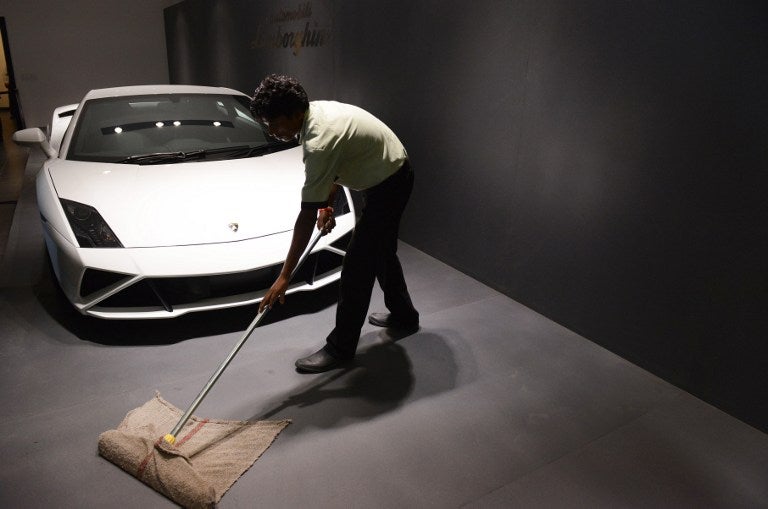 A Indian dealership worker mops the floor near a Lamborghini luxury model of the Gallardo line during the inauguration of a luxury car dealership for Lamborghini in New Delhi on September 23, 2013. AFP

NEW DELHI — A valet at a five-star hotel in the Indian capital caused $335,000 worth of damage to a Lamborghini Gallardo after crashing it into a concrete wall in front of horrified guests, the hotel and a report said Thursday.

A photograph of the aftermath at Le Meridien hotel, published in the Times of India newspaper, showed the severely crumpled front end of the sleek white supercar with its hood forced up.

“We get all kind of luxury cars, important guests and hold outstanding events and this was something completely inadvertent,” a hotel spokeswoman told AFP, saying the accident occurred last Thursday.

She said the valet had been working for 10 years and appeared to have lost control of the Italian speedster on the slippery forecourt after an early afternoon rain shower.

CCTV footage shows the valet bringing the car from the parking area to the porch of the multi-storey hotel, which hosts several glitzy restaurants and a bar, and then briefly getting out, the Times of India said.

After climbing back behind the wheel, he then lurches forward inexplicably, sending a colleague diving for cover before piling head-on into the wall.

The car had been borrowed from its owner, a Mumbai-based businessman reportedly in the construction business, and driven to the hotel by a cousin.

“The car had been parked by valets a number of times before,” a friend of the owner, Nipun Miglani, was quoted as saying by the Times of India.

A police case has been filed against Le Meridien, which has refused to accept responsibility, as well as the valet, named as Arun Kumar. The owner claims the repairs have been estimated at 20 million rupees ($335,000).

The rear-wheel-drive Gallardo, named after a type of fighting bull, is capable of a top speed of around 200 miles an hour (321 kilometres an hour) and has an engine packing more than 550 brake horsepower.

It sells in Europe for around $250,000 but import duties on supercars normally double their sale price in India — not enough to deter New Delhi’s growing band of millionaires.

The valet was taken to hospital for treatment for head injuries but was discharged the same day. The hotel said he was currently off work.

“We have given him leave until such time that he recovers psychologically and till the time that the insurance claim and other processes clear through,” the spokeswoman said.

“We may not put him back on valet. We will give him time because he may get nervous initially,” she added.