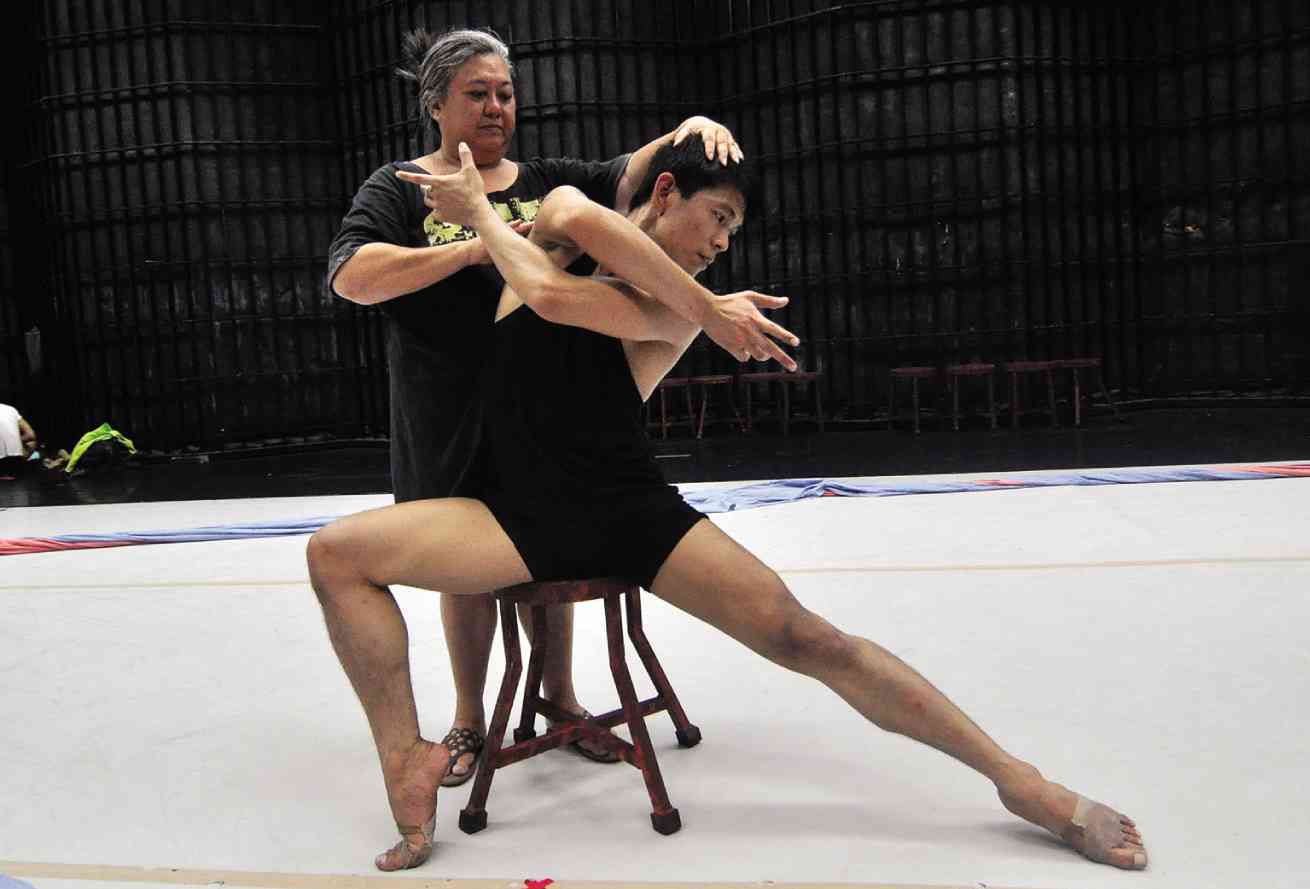 Dressed in her trademark black shirt and bermudas, choreographer Agnes Locsin urges dancers to put their heart into their roles.

“As you enter, the body should speak, not only your face. I want your eyes to speak to me,” she says. “Every gesture has a reason. Make it mean something to us.”

With her reputation for being demanding, Locsin tries to wring out the best from the dancers. This is one of the reasons that her works are compelling to watch.

Ballet Philippines (BP) is restaging Locsin’s “La Revolucion Filipina” to commemorate the 150th birth anniversary of the revolutionary and intellectual Apolinario Mabini.  This will be its fourth restaging since the dance drama’s premiere in 1996.

Mabini was the  prime minister and foreign minister of Emilio Aguinaldo’s  revolutionary government.  When the Americans came and because of internal struggle within the Philippine government, the polio-stricken Mabini resigned.

After being captured by the Americans, he was banished to Guam. He  returned to die in his country at age 39.

During his exile, he penned “La Revolucion Filipina,”  an analysis of the Filipino revolution against Spain, the war with the Americans, and the Philippine defeat.

Locsin and writer-director Dennis Marasigan collaborated to interpret Mabini’s  political life and his “La Revolucion Filipina.”   It dares to portray the complexities of Philippine politics and psychology.

The dance also includes Andres Bonifacio  as a protagonist whom Mabini believes was unjustly tried  and executed by Aguinaldo’s camp.

“La Revolucion Filipina” also portrays  allegorical figures such as Inang Bayan (Motherland),  composed of three women who, according to Marasigan, represent the ideals of democracy—Liberty, Equality and Fraternity.  Then there’s the Oppressor symbolizing the colonizers.

“La Rev” focuses on the contentious relationship between Mabini and Aguinaldo. Although they share the same hope for a better world,  they have opposing views on how to attain it.

Historically, the paralytic Mabini was transported on a hammock from Batangas to Kawit, the seat of the new government. Locsin uses it as a dividing wall between Mabini and Aguinaldo.  While Mabini dances and plays charades, Aguinaldo declaims with force.

The dance consists of historical tableaux portraying the factionalism among the Katipunero and leaders of the Malolos Congress.  It  depicts  the   Filipinos’  misinterpretation of  freedom as licentiousness.

In the end, the libretto calls for conversion prior to revolution, One of the Inang Bayan speaks prophetically:  “Huwag nating kalimutan na kung hindi tayo magbabago, hindi tayo darakila, hindi darating sa wastong gulang at mananatiling isang lahing mangmang.” (“Let us not forget that if we do not change, we will not reach greatness, nor will we ever reach maturity. We will remain an illiterate race.”)

“For many years, we’ve been blaming the colonizers,” says Locsin. “We keep saying that we’re like this because of them.  Our history with Spain and America is over. It’s time for us to realize that the problem is in us. We should do something.”

The 90-minute expressionist dance-theater is intricately put together and lush with imagery. It consolidates the years that Locsin worked with her wards in BP from 1986 to 1999, when she was resident choreographer and artistic director.

She  brought in a new phase in BP history with the development of her signature style. Locsin dancers bristle with vigor, which makes their dancing all riskier.

The impulsiveness of their movements is electrifying. There is a driving force to their movements  that exude  raw emotions and an organic feel. Still, every motion is imbued with internal power—what she calls “motivation”—and dramatic vigor.

Locsin points out that her Neo-Ethnic style was based on the physical gifts of her wards.

“I did not create Neo-Ethnic. They made it possible. All my experimentation was done on their bodies,” she says.

Designer Mio Infante created an abstraction of a ramp, inspired by a ray from the sun on the Philippine flag, and a quill, symbolizing Mabini’s writing

Guest artist Sonny Locsin, admired for his silky dancing, will essay Mabini. He is the nephew of the choreographer and he first danced the role when he was 17.

“Mabini is a soft character and an intellectual. You can’t cast a macho. It’s got to be an introverted person which Sonny is. At 34, Locsin is is ripe for the role,” the choreographer says.

Sonny learned dancing from his grandmother, the late Carmen Dakudao Locsin, and his aunts Bing and Agnes.

After a stint with BP, he became a scholar at the San Francisco Ballet School, and worked in dance companies in France, Portugal, Italy and Germany.

He is now demi-soloist of the Oper Am Rhein Ballett Theater in Dusseldorf, Germany.