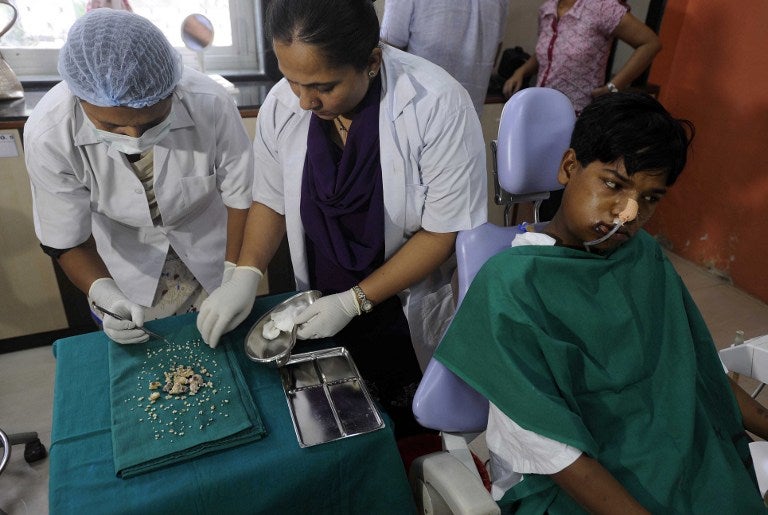 In this photograph taken on July 22, 2014, Indian dentists display teeth removed after operating on seventeen year old Ashik Gavai at JJ Hospital in Mumbai. Surgeons in Mumbai have removed 232 teeth from the mouth of an Indian teenager in what they believe may be a world-record operation, the hospital said. Ashik Gavai, 17, sought medical help for a swelling on the right side of his lower jaw and the case was referred to the city's JJ Hospital, where they found he was suffering from a condition known as complex odontoma, head of dentistry Sunanda Dhivare-Palwankar told AFP. AFP

What is complex odontoma?

MANILA, Philippines — The United States’ National Center for Biotechnology Information defines complex odontoma “as an agglomerate of all the dental tissues that are characterized by normal histodifferentiation but abnormal morphodifferentiation producing little or no resemblance to normal tooth form.”

On Thursday, surgeons in India said that they have removed 232 teeth from the mouth of a teenager, which they believed as a world-record operation. The surgery took seven hours.

An odontoma is simpler defined at Allhealthsite.com as a “specific type of tumor that is benign and located in your mouth. It is made of all or some of the tissues that make your teeth.”

The tissues, however, may not be visible to the naked eye and may or may not be arranged in the form of a tooth.

“It is a mass of enamel, dentin, pulp and cementum that usually grows at the same rate as teeth. However, this mass is disorganized and any one of the components may become the dominant part,” the website said.

Odontoma is common in people around age 14 as a tooth that has not emerged. Recent data said that these tumors are found in both genders.

Allhealthsite.com said symptoms of Odontomas include: serious difficulty with swallowing; tooth that is delayed when it should be erupting; lump in a gum is possibly odontoma; a primary tooth that is not coming out as it should; enlarged bone beneath the tooth. It may also confused initially with an impacted wisdom tooth.

There are many symptoms but are often misdiagnosed.

“A complex odontoma has no specific sequence for all of the dental tissue. It does not resemble normal tooth structure. At the cellular level it appears as mostly tubular dentin that encloses hollow spaces. These circular spaces are decalcified but they once held enamel. On the edges there may be a thin layer of cementum which forms a capsule like tissue surrounding the mass,” Allhealthsite.com said.

“These are some reasons why you need to keep a good connection with your dentist. That way the dentist becomes familiar with your teeth and oral conditions,” Allhealthsite.com said.

Odontoma is revealed through X-rays.

Treatment of these tumors is through removal by surgery.

“An early discovery and treatment will be beneficial to the patient. It is a benign tumor made of dental tissue and it is a fairly simple extraction in most cases. A speedy recovery is generally expected,” Allhealthsite.com said.

There are also possible complications after extraction, so it is recommended to stay in touch with the dentist.