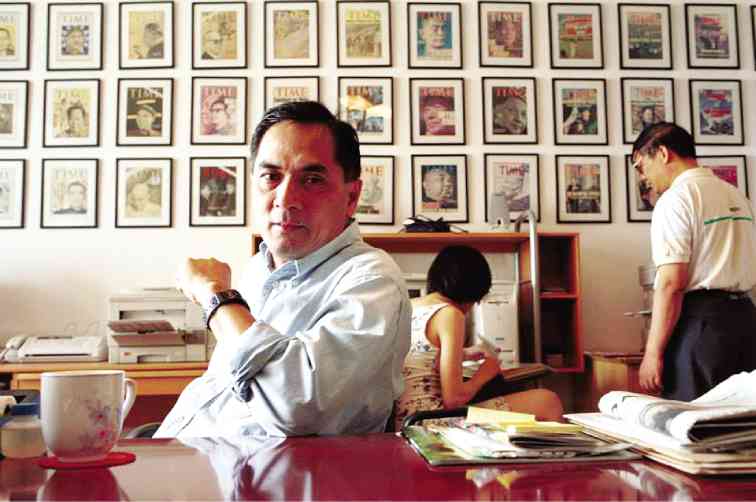 I’ve been running into Jimmy in my neighborhood so often it looks like he’s finally, really, ready to move. He lives in China; in fact he has lived there for 43 years since managing, in the nick of time, to escape before Ferdinand Marcos could install himself dictator in 1972, and take power over his life.

Jaime FlorCruz was the exact sort of bugbear Marcos marked obsessively: communist, worse yet, Maoist. A young newspaperman to Jimmy’s younger, if you like, Maoist, I didn’t really mind that he was; I simply put it down to one of those stripes of nationalism of which a stripe so radical as communism might be just the deserved opposite of the feudalism that had run Philippine life in all its history.

At any rate, Jimmy seems past it. For years now he has been the China correspondent of the broadcast network CNN and before that, of the weekly news magazine TIME—both enterprises American, both unapologetically capitalistic. One of his two children has gone to college in New York, itself the world’s quintessentially capitalistic capital, and now works there.

Indeed, Jimmy personifies what seems to me an only-too-natural transformation brought on by the mellowing effects of age. To be sure, there are always successful resistors—one only has to insist after all—but they are the exception, in fact an aberration; it would appear if you saw how the likes of them continue to luxuriate in their old hurts, resentments and ideologies.

Allowed to work its full course, in any case, the transformation becomes complete and irreversible, I’ve observed, once as one begets grandchildren and begins to carry pictures of them in one’s wallet or cell phone. Jimmy has not reached that point—neither one of his children is yet married—but, again, it’s a matter of time.

For now his concern is a roost for when he retires in the old country with his wife, “next year possibly.”  When he does, and if he does settle in my neighborhood, where he says he actually has staked an option in one of those main-street condominiums, he will be just a short ride to the home of a companion escapee to China, Chito Sta. Romana. Chito has been back a few years now, retired from another American broadcast network, ABC.

A third comrade in flight and fate, Eric Baculinao, must be well along in his own planning for a permanent homecoming; I heard him talk about it as early as three or four years ago when he visited, apparently to in fact begin prospecting. Eric is Jimmy’s—as was in his own time Chito’s—opposite number at NBC.

It seems to me that an experience in journalism, a profession that rates open-mindedness and detachment as chief virtues, helps to not only ease one’s coming to terms with seniorhood and retirement but also heighten one’s appreciation of them. I can only imagine how that theory might apply in the singular case of Jimmy, Chito and Eric, who have had to work in extremely sensitive conditions, reporting China to world audiences through American media.

I see Chito now and then, and he has the look of a happy returnee. With Jimmy, one little genial remark from him tells me he will likely get on nicely himself.

Eyeing the sort of retirement getup I now normally go around in, he says, “I’m envious.”

I was wearing canvas loafers without socks, a t-shirt proclaiming my faith big across my air-blown chest (“Just do it”) and my favorite puruntong shorts.

Who is to say that it’s not the right thing to wear for look—or perspective?