President who has no first lady: It is what it is | Inquirer Lifestyle ❮ ❯ 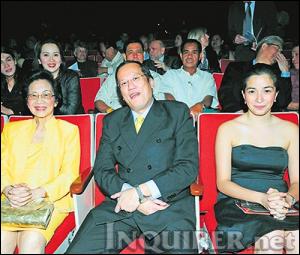 President who has no first lady: It is what it is

President Benigno Aquino III is in the homestretch of his six-year administration, and he still has no first lady. (And that is news?)

Not since the postwar presidency of Elpidio Quirino, whose wife, Aurora Syquia, was killed during the Liberation of Manila in 1945, has the Philippines not had a first lady. (Of the country’s only two women presidents, Mr. Aquino’s mother, Cory Aquino, did not have a first gentleman.)

Given the rate his critics have been going to town, so to speak, one would think that even this would be taken against him, too. It’s not as if to have a first lady was one of his campaign promises. But then this country is hooked on romance and the teleserye.

In fact, given the burden of running the country, that question wouldn’t be on the mind of Mr. Aquino at all. He has better things to think about, obviously.

As he has often told friends, nothing and no one should distract him from the task of governing. Focus, he says.

At the beginning of his term, the President saw how his love life—or alleged love life—not only became the stuff of headlines and gossip, but also was used by some quarters to distract him, or at least they tried to. He saw through that, and was so resolved that he wouldn’t yield to any potential mental or emotional diversion from the task at hand. “They would use that only in the hope of distracting me,” he would say about the publicity on his supposed love life or love interest.

The P-Noy Love Life 101 (whether fact or fiction): The beauteous Shalani Soledad (now Romulo) at the start of the Aquino presidency. Fashion stylist (and good friend of his sister). Investment banker. Preschool teacher (but only because of a single photo op at a pop concert). TV/radio host-turned-multibrand endorser. Lawyer.

It was as if after three years of nonstop speculation on the love life of the 54-year-old bachelor President, the country has overdosed on the stuff and has moved on. Perhaps it would be more accurate to say that there has been no woman since then who has dared step forward and leaked to the media that the President has been dating her. No woman, or her friends, has been raring to cash in on the publicity. Which is good because by now, it is known that Mr. Aquino doesn’t relish publicity on his private life.

He is, in fact, rather low-key about everything, not just his personal life, and has been careful and circumspect about everything, including photo ops. At one dinner, someone gave the not-so-funny suggestion that the President must wear a standard, noncommittal facial expression in all photo ops, especially when with women, so that no photo could be tagged maliciously against him by his detractors, especially on social media. What that facial expression should be became the evening’s object of hilarity.

As flippant as that may sound, it underscores the style of this presidency—it doesn’t use personal trivia, not even a bachelor’s love life, to gain publicity or popularity, or to massage public opinion. Mr. Aquino doesn’t commoditize the presidency, even in an era of celebrityhood.

Then who handles the distaff side, so to speak, in the Palace? The state and official functions, from the food to the décor, the stuff that traditionally relies on a woman’s touch?

The Palace officials hired to perform the tasks do so. In this case, the social secretary and the Palace staff handle the requirements of official entertaining, including what to serve those during courtesy calls and down to the smallest details, such as the presidential seal on the napkins, for instance.

It is also this staff that handles the social niceties expected of the Palace, such as sending birthday cards, tokens and mementos.

Since it is the professionals who fulfill the social requirements of the Palace, the outcome is also professional and functional. In short, nothing lavish or over the top. Theirs is not a first lady’s style or fashion statement. Whatever they do has to adhere to protocol and a sense of propriety, above everything else. Nowhere was this more apparent than in the state dinner for US President Barack Obama and the National Day of Prayer at the Palace, when the lush grounds had simple nipa stalls of arroz caldo and puto.

It is a social staff that knows how to project Mr. Aquino’s no-fuss presidency.

During some state occasions, the President taps his sisters to welcome the dignitaries. However, it must be remembered that even before the start of the presidential campaign, Mr. Aquino was already almost apologetic to his sisters. He said that even before they could grieve the loss of their mother, he was already putting them through, again, a hectic life in a fishbowl. He doesn’t assume that he can impose on their time.

Who looks after the President’s wardrobe and advises him what to wear and how? That’s already a template, a no-brainer really, he told us once, and we never repeated the question. His wardrobe template has indeed been cast. Barong and suits by Paul Cabral. Haircut by his suki haircutter Cherry. He shops for his own shirts, if he happens to be in a mall. (Mall-going is one of the standard pleasures that has continued into his presidency.)

The man is low-maintenance. His home at the Pangarap official residence is prepared by the family’s longtime yaya and housekeeper, Yoly, whose corned beef and adobo he is proud of.

Without a first lady, whom does he chill with at the end of day? You don’t have to be his friend to know that for a conscientious President, there is no such thing as “end of day.” His day doesn’t really end; it just hurtles into a night of literal disasters and calamities.

He has stuck to the same handful of friends from school and has dinners with them and their spouses.

As people know by now, he listens to his CD collection and, as a businessman accurately noted, “the extent of his merrymaking is a sing-along.”

He is a voracious reader, and books take up the little free time he has. Unlike other presidents, he reads official documents and reports himself, from cover to cover. It is a diligence he applies to the job that people hardly give him credit for.

Documents, more than romantic dates, apparently take up his time outside the Palace. A Western CEO of a multinational company noted at one dinner how, during their audience with the President, he and his delegation were impressed with Mr. Aquino’s knowledge of industry facts and figures beyond those at the table.

This President doesn’t have a first lady, and perhaps may not have one till the end of his term. No first lady, no love life? One and the same thing? Ah! But that’s for another day.

A few days after Christmas last year, I casually skimmed over what has happened in his life, and the ironies life has brought. Before I could turn ponderous, he said, matter of factly, “It is what it is.”

It is what it is.

President Aquino: My love life like Coke–from ‘regular’ to ‘zero’

Bimby: ‘Are you my tito’s girlfriend?’