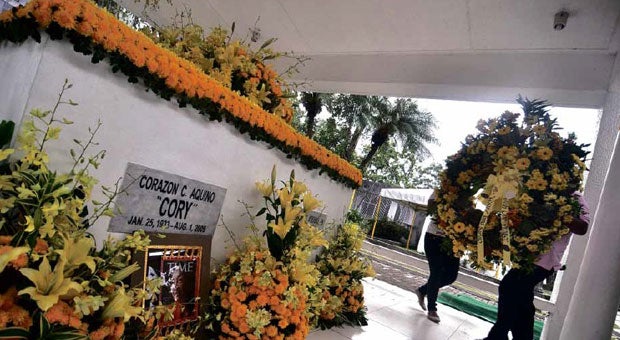 ENDLESSLY REMEMBERED Yellow flowers are placed at the grave of President Corazon Aquino beside that of her husband, Sen. Ninoy Aquino Jr., at Manila Memorial Park in Parañaque City on Thursday, the eve of the fifth anniversary of her death. RICHARD A. REYES

So very Cory Aquino: A drawer of rosaries

“Ballsy needed some photos of her mom and she asked me to get some from our office,” said Juico, Cory Aquino’s longtime secretary.

The foundation was named after the opposition senator who was martyred on Aug. 21, 1983. His assassination sparked a nationwide protest leading to the ouster of the dictator Ferdinand Marcos.

The murder swept the opposition leader’s widow to the presidency.

Cory Aquino, who served as President from 1986 to 1992, died of colon cancer exactly five years ago today, Aug. 1.

In her memory, the Yellow Ribbon Movement, led by Juico, will hold a special Mass Friday at the Rockwell Chapel in Makati City. Fr. Manoling Francisco will celebrate the Mass.

Juico said she searched Cory Aquino’s office and was surprised to find a drawer full of rosaries.

“There were rosaries made of wood, some metal. Maybe they were gifts, or maybe she planned to give them away as gifts,” Juico said.

That President Cory was a prayerful person is public knowledge.

Juico said Cory Aquino prayed the rosary while traveling from her house on Times Street in Quezon City to her office in Makati after her presidency. On most occasions, Juico would be with her in the car.

And traveling to Hacienda Luisita in Tarlac province would mean more time to pray the rosary, Juico recalled.

Rosary all the way

“Once we entered the North (Luzon) Expressway, she would bring out her rosary and we would start praying,” Juico added.

The late President’s favorite rosaries was one that came from Sister Lucia, one of the children who witnessed the series of apparitions of the Virgin Mary in 1917 near the town of Fatima in Portugal.

The rosary was given to Viel Aquino-Dee, the Aquinos’ fourth child, for safekeeping.

Juico was also surprised to find in the drawer four copies of a letter Cory Aquino had sent her months before. The letter was about a book Juico had edited about the Aquino presidency.

“I received one with her signature. But there were other copies, also signed, inside one of the drawers,” Juico said.

Ballsy Aquino-Cruz gave an explanation, or maybe a guess.

Maybe, Juico said, President Aquino had intended to give a copy of the letter to each of Juico’s four children.

Why the former President would do that has remained a mystery to Juico and her children.

Did you know: Cory Aquino oath-taking