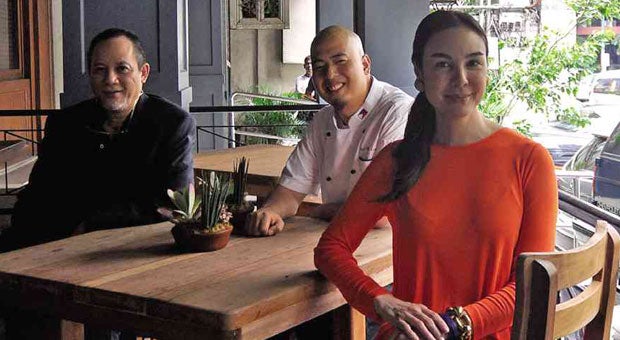 Tonyboy: I just want a restaurant that works

It sits on what used to be Cojuangco’s fine-dining French restaurant, La Regalade. “We realized that Filipinos cannot eat French every day. We needed to downgrade,” he says.

He had also folded up Lolo Dad’s Brasserie at 6750 Ayala Avenue, Makati.

Cojuangco had been searching for someone who could transform the old La Regalade into something more interesting. He says he needed an extraordinary chef who could be way above the rest.

“I just want a restaurant that works,” says Cojuangco. “I spoke with chef Bruce and we discussed concepts. It so happened he didn’t have a restaurant at that moment. He was doing food production for a convenience store. I told him the convenience store is not yours. Here, you can be as creative as you want. This is your restaurant. So I named the restaurant after him.”

To have a restaurant named after the chef can be a big factor in its success, he believes. “How do you choose where to eat? First, of course, is the type of food it serves. Next, if the restaurant has the chef’s name, people will try it because they get curious. Bruce is my attraction here. I have confidence in him.”

At Rustique, he wants to surprise people with the kind of food Bruce is known for: playful and imaginative. Cojuangco likes that Lim whips up classic Filipino dishes, but tweaked in a modern way. He specifically enjoys Lim’s kare-kare without bagoong.

“It’s his call in the kitchen. I just tell him what kind of food I think the customers want, and Bruce will do his own version,” says Cojuangco.

He observes that Filipinos like salty, fatty and sweet food. They also want very friendly prices.

Rustique also has executive lunches and a quick lunch menu for busy people.

Cojuangco has been eating at Rustique Kitchen’s every day since it opened.

“I’m always here because I hold my meetings here instead of eating in another place,” he explains.

Cojuangco likes the mood in his restaurant: homey and relaxed with soothing piped-in music.

While he’s an acknowledged foodie, lately he’s been trying to lose weight so he prefers non-fatty food. Lim serves him lots of salad and fish.

“I really love to eat, that’s why I’m overweight,” Cojuangco says. “I eat everything. I eat pork. I love steak.”

At home he eats a breakfast of rice or bread with longtime partner Gretchen Barretto. He can’t cook but claims he can easily decipher what ingredients went into the food. He enjoys Barretto’s sinigang, paksiw, bouillabaisse, pasta and roast chicken. Vangie Baga-Reyes