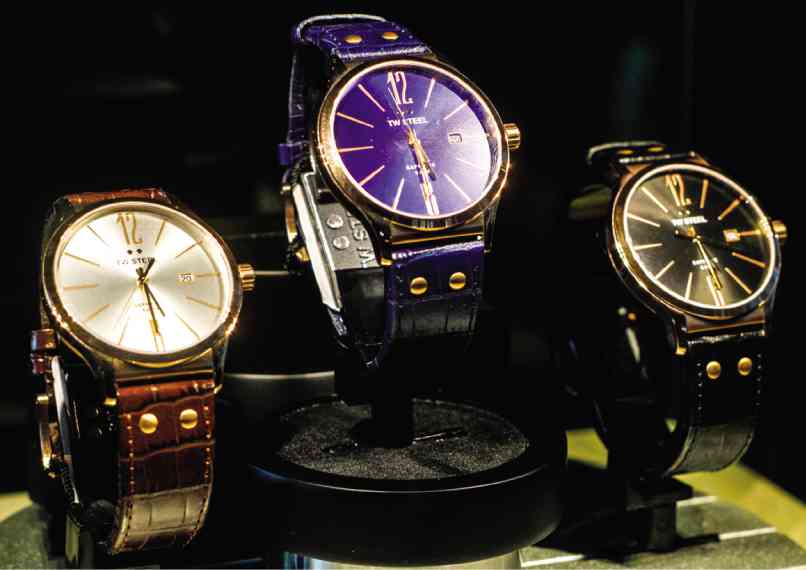 In response to its growing market of men in crisp white shirts and tailored suits, Dutch watch brand TW Steel has launched a slim line of oversized watches.

Since TW Steel debuted on the market a little over a decade ago, the watch brand has been known to produce big, oversized watches for men. But this hasn’t stopped a good number of daring women from wearing the brand.

Over the years, a considerable chunk of its core market of young, fashion-forward men were unable to wear TW Steel watches because they wouldn’t fit through their shirt cuffs. It went well with a rugged tee or a rolled-up dress shirt.

The move to produce a slim line is explained in its “why not both” campaign of “marrying two very important components,” said Auke Possel, TW Steel’s marketing manager, during the slim collection’s recent launch in Manila.

The watch brand, distributed by the Lucerne Group, has tapped such Manila-based brand ambassadors as football coach and producer Sebastian Ripoll, economist and businessman

TW Steel is said to be Lucerne’s best-selling brand in the fashion watch category. Part of the research that went into its slim collection involved testing numerous times how the watch actually fit under a shirt cuff and suit.

“One component is our brand DNA of making bold statements through oversized watches. The second is we would like to offer a slimmer, more sophisticated execution than what are available on the market,” said Possel.

A typical TW Steel watch’s bezel has a 45-mm diameter. In comparison, the slim line’s bezel is no smaller, but with a thickness that measures no more than 7 mm, it’s now half as bulky as its predecessor, dubbed the Pilot.

The new line comes in 10 executions—from Italian leather straps in such colors as black, dark brown and cobalt blue, to all-steel bracelets. Watch cases also come in a variety of shades and makes, such as stainless steel and A-grade rose-gold plated.

“The idea for the slim collection was conceived a couple of years ago,” said Possel. “It took us some time to actually produce the line because we wanted to know what our partners really think about it.”

But he was quick to add that the move hasn’t in any way compromised TW Steel’s identity of being “big in oversized watches.” That would be the last thing on their minds.

“I don’t think it’s a compromise. If ever, it’s an extension of what we are known for. Based on what you see, we have stayed true to our brand DNA. The big, bold statement is still there. Only this time, it’s slimmer.”

Its designers, though, have had to tweak a number of elements in keeping with the line’s slimmer case. Although the date is still there, the dial has been changed from a numeral to a

Since the brand enjoys a good relationship with Miyota, the Japanese company responsible for its watches’ movement, making minor changes in the slim collection’s movement was no problem.

All models run on a Miyota 1S13 slim movement housed in a case, which has a so-called shine finish that adds additional visual appeal to the timepieces. Each piece in the slim collection is also embellished with sapphire crystals.