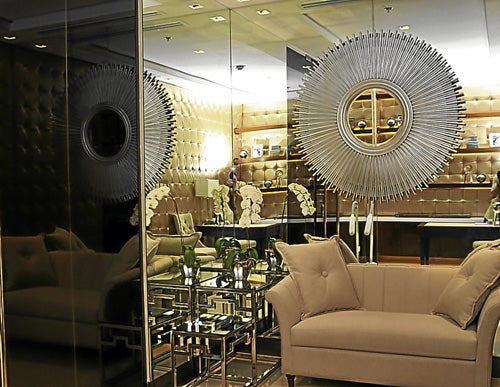 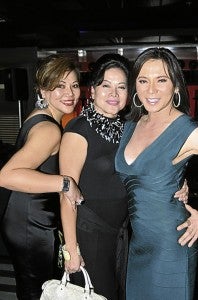 MANILA, Philippines—Shades of gold and champagne are the new white as far as one of the country’s leading beauty doctors is concerned.

When Dr. Vicki Belo, owner of Belo Medical Group (BMG), sat down sometime last year with designing sisters Ivy and Cynthia Almario to discuss the look of her newest clinic at the ground floor of Greenbelt Residences in Makati, she made it clear she’s “so done with spa.” Instead, she wanted the look and feel of luxury, as befits her 330-sq m “flagship” clinic.

Apart from its high ceiling, the venue is a designer’s showcase because it opens out to busy Esperanza Street and Greenbelt 3 beyond.

After doing a number of BMG clinics, including the big one in Alabang, the Almarios drew on Belo’s fascination with high-end designer stores, particularly colors and elements inspired by Gucci and Louis Vuitton, to produce a totally new look for the company’s Greenbelt branch.

“I’m so done with all-white,” said Belo, referring to some of her older, antiseptic-looking white clinics inspired by high-end spas in Los Angeles. “When I saw the high ceiling, I was thrilled because all my other clinics don’t have it. The space is huge, accessible and visible from across the road.”

Belo told the Almarios of her preference for Gucci golds similar to the shades she saw at the brand’s Milan store. The Almarios immediately went to work by sourcing for the chicest shades of faux leather champagne and gold for the clinic’s paneled and tufted walls.

“We opted for faux leather because it’s much more eco-friendly,” said Cynthia. “We hope to start a trend by showing the chain’s more luxurious side.” 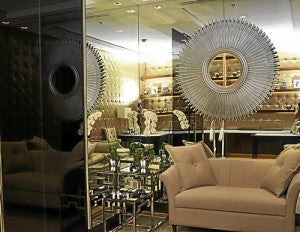 But the look’s catalyst, they said, was a new, textured Italian floor tile in a lighter shade of champagne and embedded with gold accents. After doing the floor, they worked their way up to include a series of one-of-a-kind wall panels made of mother-of-pearl shells, clearly the reception area’s piece de resistance.

Aside from being visually pleasing, the mother-of-pearl panels give the entire reception area an unmistakable Philippine feel.

“We can be modern without totally abandoning our roots,” Belo said. “These details dovetail with my vision of boosting the country’s position as a leading destination for medical tourism.”

The use of white in older BMG clinics, Ivy added, was a product of its time. Since the project was deemed as BMG’s headquarters, a more upscale design, including Belo’s color preference, called for it. 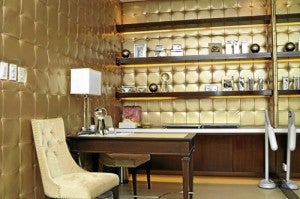 Ivy also noted that this time around, Belo was more involved with the project compared with their previous collaborations, and was clearly enjoying the design process. Belo even sat on a number of sample chairs to make sure they were comfortable. The sisters were also pleasantly surprised to see her occasionally pop up at the site, something she seldom did before.

“As designers, we welcome that,” said Ivy. “It shows the client’s interest as well as appreciation for what we do.”

Two of the biggest challenges the Almarios have had to deal with were time constraints and the fact that Ayala Land wouldn’t allow structural additions like a loft to maximize space. Their work was mainly confined to the clinic’s public areas, as the treatment rooms have certain internal standards to follow concerning space and setup. 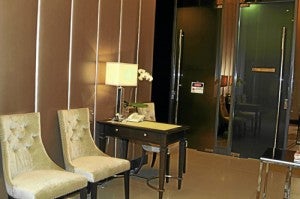 “We simply chose a color scheme for the treatment rooms that would echo the one seen in public areas,” said Ivy.

While most of the walls found in public areas are sectioned, padded and covered in champagne, the walls in Belo’s private space are done in tufted gold. The only Almario trademark is the sunburst mirror above an upholstered settee facing Belo’s desk.

“Now that the weather is unbearably hot, I find myself hanging out more often than I should in my Greenbelt office to cool off and get some work done,” said Belo, who has an office in every BMG branch. “For me, this office is literally the coolest place in Metro Manila.” 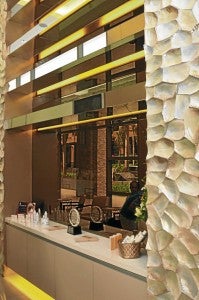 Each office, she said, is designed differently for “my own entertainment.” And the one at Greenbelt is by far her favorite. The flamboyant doctor’s legendary generosity seemed to have flown out the window as far as her newest office is concerned.

“Since I only use each office once a week in the morning, I encourage my doctors in all the branches to use the space during consultations whenever I’m not around,” she said. “But not with my Greenbelt office. This is my private space, including the bathroom, and I want everything to remain as it is.”

Apart from the furniture pieces done in shiny chrome and velvet champagne upholstery, the Almarios incorporated bronze in the form of mirrorized walls in the receiving area. To further amp up the look of luxury, they did a section of the wall using Bisazza mosaic tiles in gray and ivory with gold inlay.

On the opposite side of the reception area sits a series of built-in cabinets and shelves to highlight BMG’s over-the-counter beauty solutions. The Almarios even had the black computer monitors used by receptionists wrapped in matte gold fabric to blend with the entire color scheme.

“Black monitors stick out, while white ones would have been too stark against the metallic background,” said Cynthia.

In lieu of a huge signage, the wall above the main receptionists’ counter projects blown-up videos of Belo as she talks with BMG’s celebrity endorsers regarding their beauty concerns. The sound is muted and delicate procedures such as liposuction and facelifts are tempered to make the viewing experience as pleasant as possible.

“It’s the closest thing to watching a fashion show,” said Ivy. “Except this time, what people see as they wait their turn are images of Vicki and her guests, and various treatments the clinic offers.”

Twin opposite corridors lined with treatment rooms lead to a VIP area where clients can wait while having juice or coffee. The entire clinic, including Belo’s office as well as treatment rooms, has a series of cove ceilings.

The Almarios sourced various lamps and lighting fixtures from Pietro. They also commissioned Fine Steel to do shiny chrome metal works on accent and coffee tables, including a series with LV-like emblems. Belo’s brother Gerry Cancio provided the furniture pieces.

“People, especially foreigners, are drawn to the clinic out of curiosity,” said Belo. “It has become a must for local representatives of various beauty-related products and machines to take visiting foreign beauty doctors here for an informal tour. The clinic has become a source of pride not only for me, but also for countless Filipinos in the beauty business. I’m just too happy to inspire them with what I have, even if I’m not always around to personally welcome them.”