A weekend with the Spiral Cats | Lifestyle.INQ ❮ ❯ 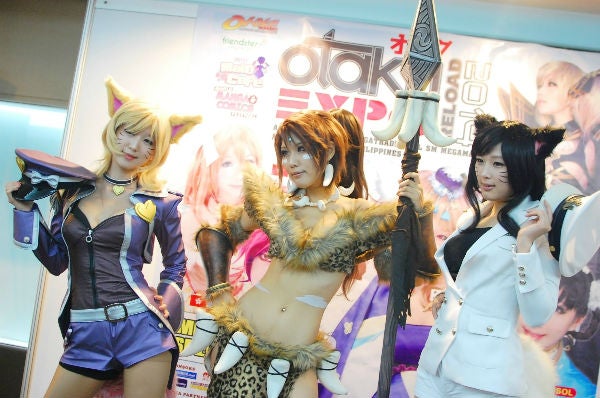 A weekend with the Spiral Cats

MANILA, Philippines – It’s not just the Korean drama and pop music wave that has reached the Philippine shores. Korean cosplayers as well have actually been flying in and out of the Philippines to attend established and prestigious cosplay events in the country.

In fact, just last Saturday (August 9) at the SM Megamall Megatrade Hall, hundreds of fans gathered for the Otaku Expo Reload 2014. Some of them were present to explore the convention with friends, while a significant number of attendees came to catch a glimpse of the professional cosplay team from South Korea, the Spiral Cats (Spcats).

Getting to know the girls of Spcats

At first glance, one will find it challenging to tell the differences among the three members of the group. But after a while of taking a closer look on each of them, observers will realize that Tasha stands taller than the rest, and that her unique doe eyes add intensity to her stare. Doremi on the other hand is chinky-eyed and has a sweet smile, while Ssol is fierce but very charming.

But these were, of course, just mere impressions. When the girls started answering questions from the Philippine press in a conference held before their scheduled meet and greet with fans, it was then that the crowd acquired a better understanding of their character and the reasons behind their cosplaying.

All three members of the group have been cosplaying for over a decade now. No wonder each of them exuded so much finesse while showcasing their costumes of excellent quality during the event.

But while most believe that the outfits they bring to the table are made by a third party and are only delivered to them once done, Spcats revealed during the press conference that they are actually very hands on in the creation of their costumes.

Ssol shared that they personally go to market places to choose the fabric to use for their costumes. And contrary to popular belief, they don’t have the freehand to pick whoever they want to cosplay. Because Spcats is a professional cosplaying team – with modelling commitments outside the cosplay-sphere – they carefully select which member gets to cosplay which character.

And once done with the selection and planning process, the group then commences with the gruelling yet also fun stage, the production of costumes.

Impression on the Philippine cosplay community

In their narration, it was apparent how meticulous the group is when it comes to the tailoring of their costumes. But when asked how they find the Philippine cosplayers they have seen so far, all members said they were very impressed with the quality of the costumes the cosplayers wore and that, they can sense genuine happiness from the Filipino cosplayers they have encountered.

Ssol added that she’s delighted to see her fellow cosplayers happy, because “that’s how cosplayers should be,” she said.

When asked what they love doing besides cosplaying, former game developer Tasha shared that she’s into animation and gaming while Doremi bakes cookies when not playing mobile games. Ssol on the other hand loves to sing.

But when the dialogue shifted from light to serious, the girls opened up about what they love most in cosplaying.

For Ssol, an art major back in college, she’s fascinated how cosplaying creates a 3D/real-life version of the 2D art we see in animated series. And for the shy and introvert Doremi, she’s thankful how cosplaying helped her gain friends and become more outgoing. For Tasha, it seems that animation and gaming are really her biggest influences.

Finally, when asked what traits they require when looking for a new Spcats member, Ssol answered: “Humanity, compassion, and perseverance.” The girls also said that they are looking into exploring other fields like managing their own maid cafe or a costume shop based on Spiral Cats. They are, of course, looking forward to stepping up their game together as Spcats – the group from South Korea that fans from all over Asia, and perhaps the other part of the globe, have come to love.

The Otaku Expo Reload 2014 was brought to us by the Otakuzine Anime Magazine.