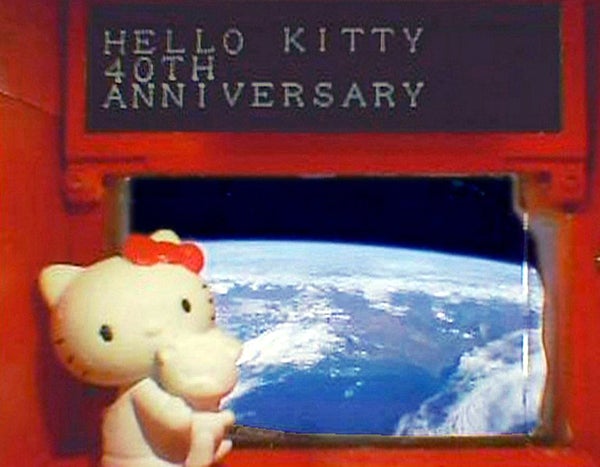 This handout picture taken on August 7, 2014 and released from Japanese character giant Sanrio on August 12 shows Snario's famous cat character Hello Kitty sitting in Japanese satellite "Hodoyoshi-3" in space, while the earth is seen in the window. Hello Kitty, the Japanese-made global icon of cuteness, is now travelling the space, the cat's first extraterrestrial adventure marking the year to celebrate her 40th birthday. AFP

TOKYO—Hello Kitty has been sent on her first space mission, as Japan’s global icon of cute celebrates its 40th birthday in extraterrestrial fashion.

A Kitty figure is now circling the Earth aboard a small satellite equipped with a digital message board, part of government-funded project to attract private companies into the space business.

The initiative calls on fans to come up with short messages that will be flashed on the board sitting above the four centimeter (1.5 inch) cat, according to Kitty’s creator Sanrio.

The white feline with a red bow sits by a window looking back at Earth, with the board displaying messages of up to 180 characters in English and Japanese.

“It can be a message that you want to send from space to someone special on Earth, or it can be something more general,” a spokesman for Tokyo-based Sanrio said Friday.

The satellite was launched in June from Russia.

The moon-faced mouthless white cat first appeared in 1974 on a coin purse in Japan and has since built up a worldwide fan base, appearing on tens of thousands of products, from handbags to aircraft, in some 130 countries.