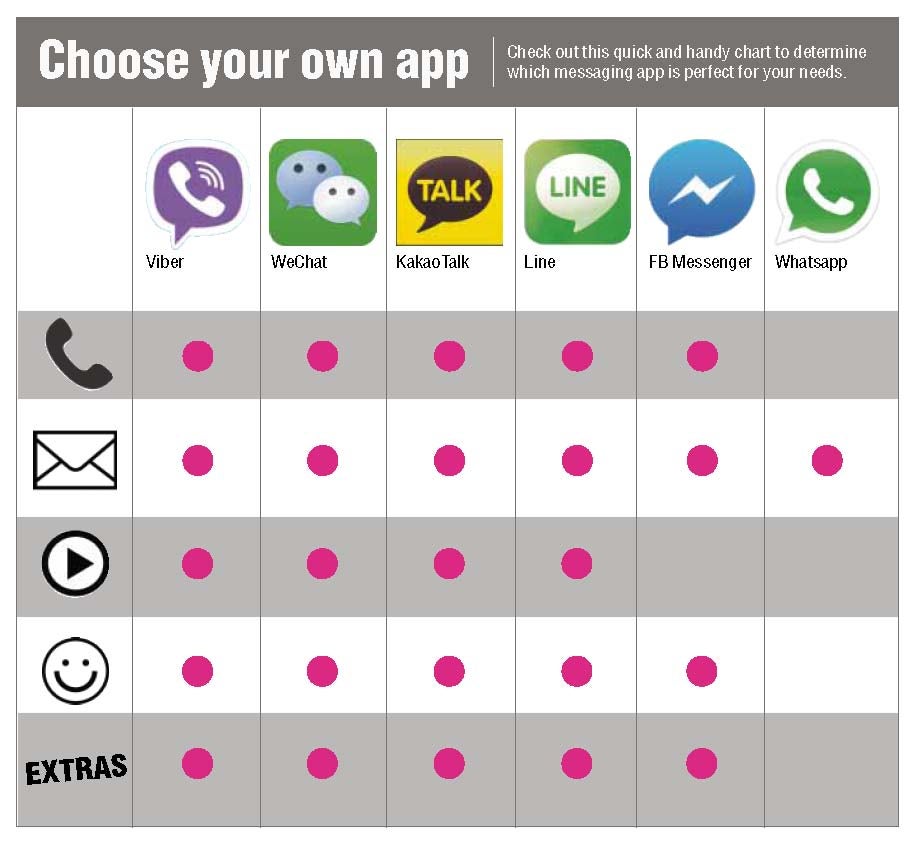 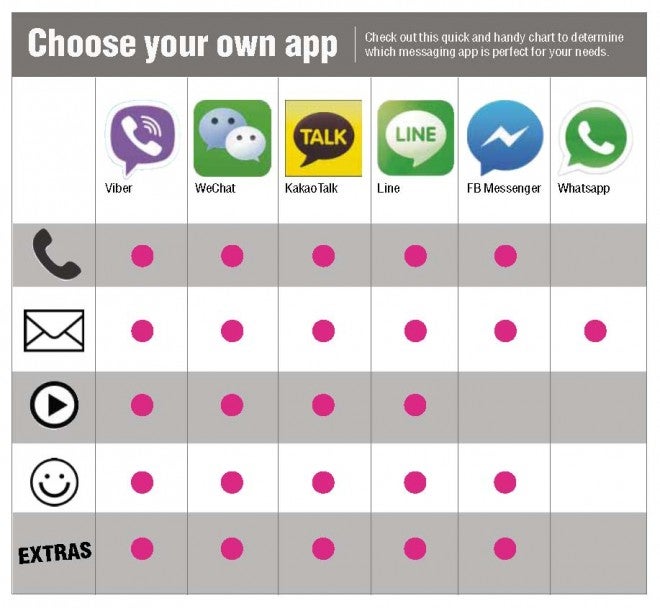 When was the last time you sent out a text message with a corresponding fee? Nowadays most of our friends and family members can be found through Internet-based free messaging apps such as Viber, Line, KakaoTalk, Whatsapp, Wechat, or the recently controversial Facebook Messenger.

These apps started out as indispensable alternatives to text messaging when one was traveling. Instead of paying roaming rates for text (normally P15-P25 a pop), you could log on to a Wi-Fi network and send messages and make calls to other users free of charge. Pretty soon, as smartphones and data plans were offered as a bundled package, it was natural for smartphone users to use these apps as their basic means of communication.

With the slew of messaging apps available, choosing one can be confusing; if your friends are anything like ours, chances are you have all the apps installed anyway, and you just end up chatting with whoever’s on which app.

For example, if you’re chatting with a bunch of no-nonsense, “stickers are for pansies” guys in their early to mid-30s, you are probably exchanging messages on Whatsapp—the most popular, no-frills messaging app among the rest. It is also the messaging app of choice of uncles, aunts and family groups with parents who have been recently initiated into the smartphone life.

If you’re into Korean/Japanese culture and a die-hard fan of K-pop and K-dramas, or if you’re a teenage (or feeling teenage) girl, you’re most likely chatting away on super kawaii messaging apps like Kakao Talk or Line. 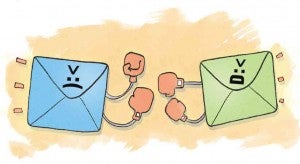 Those who play well-designed, addictive computer games are probably on Line as well. This Japanese messaging app adds another layer to its social networking element by developing games that will hook users into bugging their contacts for more lives, power-ups, etc. While we’ve normally been able to resist pestering Facebook friends for extra Candy Crush lives, we found ourselves pinging random friends on Line begging for coins when we ran out on Line Dozer (the cutest coin dozer app ever), and Line Hidden Catch (a spot-the-difference type game with a time element).

For the pop culture-obsessed (and those who can’t stomach paying $1.99 for sticker sets), WeChat is the obvious choice. When it was first launched in the Philippines, one of WeChat’s biggest features was the “Discover,” which, when turned on, allowed you to see other WeChat users nearby; you could strike a conversation with them, like a built-in Grindr/Tinder.

What it should’ve capitalized on, though, is the fact that WeChat allows you to save GIFs (you know, those funny animated photos on loop that is the backbone of every BuzzFeed article), and use them as stickers. When we discovered this feature, we immediately begged our friends to switch to WeChat because there is nothing funnier than using GIF reactions as answers to the screenshots of other friends misbehaving badly on social media. (You know the type: there’s the high school classmate who likes posting cleavage selfies; or the colleague who steps out for cigarette breaks, when really he/she is taking #OOTD photos from the restroom). Why use a sticker of a cute bunny throwing up when you can send a GIF of Emma Stone making a “yuck” gagging face instead?

Viber, meanwhile, attracts a broad audience. The simple and clean user interface is cool for colleagues to discuss work-related stuff, while the fun and sometimes irreverent (where else are you going to find stickers of a middle finger, and two pandas going at it?) stickers make group chatting fun with friends. It’s also great to use when working on your desktop computer.

If your boss frowns upon excessive smartphone use, you can seamlessly continue your Viber gossip session from your computer. Plus, the sticker sets are free on Viber desktop.

Facebook mobile users were outraged when they felt effed by the blue “F”—after it required users to switch to Facebook Messenger instead of using the messages tab built into the apps. Not only was it an extra app download, it also required using another app to send messages to Facebook friends.

The ambiguously worded terms and conditions of the messaging service didn’t help the transition either. From an iOS point of view, Facebook Messenger seemed like a dumb move. While browsing through your feed, you have to switch apps just to reply to a message sent on Facebook.

On an Android device, though, where Facebook Messenger’s chat heads are allowed true multitasking, it’s an awesome app for chatting with friends. You can set the chat heads to hover on the side of your screen and you can easily reply and jump into any conversation without leaving the current app you’re using (unless it’s a full-screen game).

You can also add a “compose message” button from your notifications tray which gives you instant access to the messaging service.

It was only when we tried Facebook Messenger on Android that we discovered how cool it was.