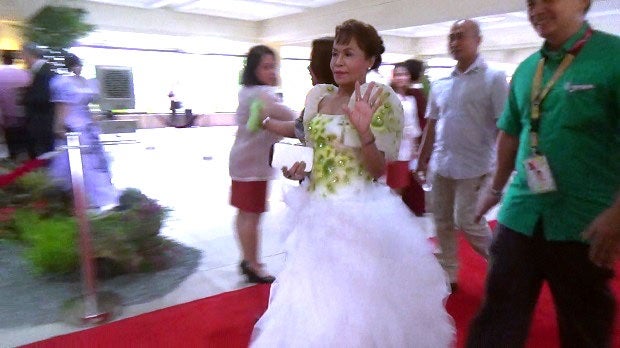 Mommy Dionisia’s lover: It’s not her money; my intentions are pure

When Mommy D announced her “blooming” relationship with the seaman last month, she and her beau got swamped with criticism. Some people were blunt and disparaging in their disapproval, saying there could be no other motive than financial gain for Yamson.

In the TV interview, Yamson admitted being hurt by negative comments but vowed to prove critics wrong.

“I want to sail again and earn my own money. I want to show her family that I make money on my own and I want to prove to other people that my intentions are pure,” he said.

In the face of the snide comments from the public, Yamson, who works for a local shipping company, said he found solace in the thought that their respective families understood the lovers.

Most of Mommy D’s children, including boxing champ Manny Pacquiao, have said they were not opposed to their mother’s relationship with Yamson.

The pugilist is among Mommy D’s four children with Rosalio Pacquiao, her partner of 20 years before they separated. She has two other children from a previous marriage.

Yamson, a native of Iloilo, said his first meeting with the Mommy D was last Valentine’s Day inside a videoke bar here.

He said on the afternoon of February 14, he and some of the crew ventured into a local videoke bar.

Yamson said he did not notice Mommy D until a companion pointed her to him.

“I heard her sing. I also belted out a tune and she clapped after that,” he said.

Yamson said he later saw Mommy D and her companions having their pictures taken and thought he might also try posing with her.

So he approached one of her bodyguards and asked permission, which was granted.

He then asked her if she could shake her hand.

Yamson admitted he had earlier written his number on a slip of paper, which he slipped into Mommy D’s hand as he was shaking it.

He said that the next day, he received a message from an unfamiliar number.

After a few more text exchanges on that day, Yamson said Mommy D called. “I was overwhelmed when she called up. It was around 11:30 p.m. (of February 15),” he said.

Three days after the exchange of text messages and the call from Mommy D, Yamson said they went out on a date. By February 20, they were sweethearts.

Yamson admitted that many people consider theirs an “express relationship” as they became a couple less than a week after their first meeting.

But, he said,  real love need not wait longer.

“It doesn’t need to wait any longer. We’re not young anymore. Real love does not have to go through a strenuous courtship. If you feel it, go for it,” Yamson said.

He said he and Mommy D do not always see each other because of his job but they communicate regularly.

It is always a challenge, he said, to have a long-distance relationship.

That’s why on days he is allowed to go on a break, he comes to visit Mommy D.

He admitted he has yet to personally speak to Pacquiao, the Pacman, but added that he has met some of his siblings.

Pacquiao has publicly said he disapproved of a wedding for his mom and Yamson.

“I understood him perfectly. I also wanted him to know that I love his mother,” Yamson said.

He said he was determined to give Mommy D a comfortable life even if her children decide not to support her anymore.

“That’s why I am seeking a greener pasture by working overseas,” Yamson said.

He said he and Mommy D have agreed that he would take only short-term contract as a seaman so they could have more time together.

Mommy Dionisia: Yes, I have a boyfriend named Michael