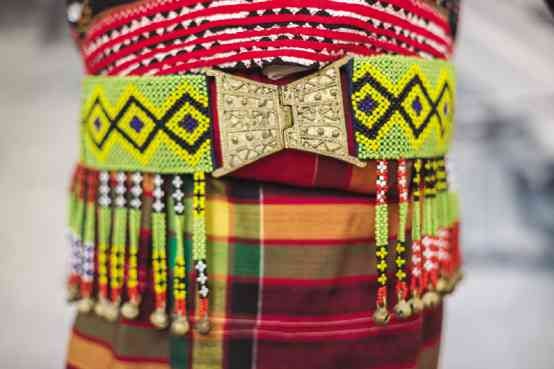 INTRICATE, colorful ensemble of albong (blouse), malong and belt of Sebaan beads worn by B’laan women of southernMindanao. Anthropologists have noticed that some indigenous groups now recycle plastic and mold it into beads to embellish their traditional garb.

Four sets of traditional native garb in varying shades of red project a commanding presence at the entrance to the permanent textile exhibit of the Museum of the People in Manila.

The floor-to-ceiling glass case features a two-piece formal female attire worn by the Gaddang of Ifugao. Beside it is a sa-ul, a set of shirt and trousers traditionally worn by males of the B’laan tribe of Sta. Cruz, Davao del Sur.

Next to this is the more subdued mid-calf-length formal wear of a Tinguian female from Abra, followed by a brightly hued dagom and sawa worn exclusively by a male Mandaya of high rank in Davao Oriental.

The clothes, along with other textiles from different parts of the Philippines, all came to the city with stories to tell—births, coming-of-age, weddings and other milestone rituals, and, ultimately, death.

The clothes and fabrics are showcased at the fourth floor of the former Department of Finance building that is now an annex of the National Museum.

Dubbed “Hibla ng Lahing Pilipino: The Artistry of Philippine Textiles,” the exhibit is a bold attempt to isolate the Filipino’s DNA through fabric.

Unlike old-school exhibits that classify specimen through ancient standards like materials and dates, “Hibla” does not hesitate to bring clothes and their stories together using their similarities in design as basis for an unconventional mix that actually works better.

Common among the four sets of traditional clothes is the use of cotton, dyes and beads. But more than that, they all have bold geometric designs that are unmistakably Filipino, even to the untrained eye.

“Hibla means thread or fiber, which is the basic thread that binds all of us. These are the ties that bind us, whether [the fabric is] ikat or malong, inabel or hablon,” said Sen. Loren Legarda, chair of the Senate cultural communities committee and well-regarded patron of the museum.

It was through Legarda that the museum was able to put up the exhibit, initially housed in the nearby old Legislative building. It moved last September to the Museum of the People beside the Agrifina Circle along Taft Avenue.

“I like it that we juxtapose [the designs from] the Cordillera and Mindanao, so you really see unity in diversity,” the senator said.

Fibers or threads from more than 100 kinds of textiles, including abaca, banana, pineapple and cotton, are seen in the exhibit. The works of more than 100 indigenous groups are featured.

“Hibla” offers a glossy colored catalog that details the stories about each item of clothing, from the source of material to how it is painstakingly handcrafted, the occasion it was worn in and who is allowed by traditional edict to wear it. 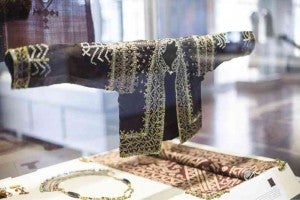 The t’nalak or abaca woven cloth of the T’boli, for example, was used mainly for special clothing and to denote bride wealth at high-profile weddings of children of datus until World War II.

The intricate tapestries of the Tausug’s pis siyabit signified the wearer’s social rank.

The tangkulu, a headcloth worn by Bagobo warriors or magani, can display varying shades from chocolate to blood red, depending on the number of lives taken by the wearer.

As expected, there are tribes that consider fabrics as a form of currency. Marriages can be forbidden among some groups without the possession of the proper cloth.

The T’boli woman who cannot weave well was considered low in social status and disallowed from demanding a high bride wealth or dowry, while Bontoc girls were required to learn weaving when they reached 12 years old.

The museum has photos, taken by assistant director Labrador, of the funeral of a ranking Bontoc male whose status afforded him to wear an exclusive finangulawan of dark cloth designed with an intricate white pattern during his burial.

Labrador, an anthropologist, noted that Cordillerans are fond of red.

“Others believe it’s because they are a warring people, but I don’t think so. In the past, red dye was difficult to get so it has an added value. Besides, they plant twice a year so the environment is green 70 to 80 percent all year round. Red is a complementary color, so I believe this is why they like it,” she said.

Enclosed in a glass case are necklaces worn by the Gaddang to indicate social status. Materials include beads, cowrie shells, mother of pearl, horn, turtle shell, brass and strings.

Labrador explained that people of the Cordillera descended to the lowlands between planting and harvest time, using the furlough to trade with people of the plains and coastal areas, even foreigners.

“You see these things and you realize the people traded extensively with other cultures. You have glass, agate, semiprecious stones. Glass beads with gold leaf. It’s important for people to wear these things because they connote rank,” she said.

Studies show the glass came from Indonesia and India. Beads that showed up in the highlands implied interactions with Muslim traders.

For some time now, academicians have expressed concern over the vanishing weaving traditions of indigenous peoples. Legarda described weaving as “a vanishing tradition,” adding that in many cases, the master weavers of a tribe could not find a worthy protégé among members of the younger generation.

She recalled the case of a young Gaddang girl who was only forced to take to her mother’s loom when the elder woman got sick and their family income dwindled.

“Weaving is also a tedious process. It usually takes a week, even a month to finish a garment,” the senator added.

Unscrupulous middlemen would also sometimes exploit the weavers by pressuring them to sell at unfairly low prices.

Labrador noted that there is also concern about how some tribes have begun using modern materials like acrylic to make fabrics, or adopt the trends of the modern world. Members of one group, for example, collect the plastic shells that house the ink tubes of ballpoint pens, melt these and mold the plastic into beads.

Meanwhile, the younger Bontocs drape their lufid in a way that the skirt has ruffles instead of flowing straight down from their waists.

“Sometimes there are purists, especially in the academe, who object to such things because they want the indigenous people to stay traditional, but I think it’s a good thing, especially for young people when they adjust because they make [whatever is new] relevant [to themselves],” Labrador said.

“When traditional people face modern times, I think they should be given that certain freedom, and they can always innovate because they already do that in their materials,” she added.

Labrador said that as an anthropologist, she sees the decision to use synthetic materials to adjust to the times as “a reason to celebrate.”

“It means people change. Problem is, sometimes we want to view indigenous people as static, kind of fixed because it’s too messy for us if we try to understand they [could be] just like us,” she explained.

This does not mean, however, that Labrador and others who continually study and support the indigenous tribes make no effort to preserve their weaving traditions.

Since the temporary textile exhibit opened in 2012, the National Museum had already hosted numerous forums in an effort to make the weaving and dye-making traditions known to the urbanized world.

Dr. Maria Stanyukovich, curator of Philippine and Southeast Asian textiles at the St. Peter the Great Museum in St. Petersburg, Russia, spoke when the temporary exhibit opened two years ago.

When the exhibit moved to its permanent location, Sonja Villarica Garcia discussed the crafts of the Bagobo Tagbawa ethnic group. A Bagobo master weaver, an inabal weaver and an abaca fiber dyer were with her to show their skills.

Showcased then were the traditional occasions where abel cloth was used, such as childbirths, weddings and funerals. More modern uses of abel cloth such as those in fashion were also featured.

Legarda recalled that aside from lectures on traditional textiles, the museum also makes an effort to invite weavers from different provinces like Laguna and Aklan as well as dye-makers like the Talaingod from Mt. Apo in Davao.

More than the fear that traditional textile making would stop, the senator expressed concern over how climate change would affect the supply of indigenous materials used to create the fabrics. As it is, the shortage of raw materials is already cause for concern.

“Our indigenous textiles are very dependent on raw materials. The threads they use are made of abaca, piña, cotton and silk; while the dyes they use come from local plants and herbs,” she pointed out.

Legarda said the Philippine Fiber Industry Development Authority and the Philippine Textile Research Institute have already raised concerns on the frequency and strength of heavy rains and typhoons, which affect the quality and quantity of fiber raw materials available for local textile producers.

In the meantime, more effort would be exerted to ensure that people would remain aware of traditional fabric making.

“This exhibit and the issues surrounding it may not be a priority of politicians because this is not a matter of political savvy.  We just don’t want a textile exhibit, we want interactive learning and continuous education in textiles,” she stressed.

“These are things to engage people. We are starting it by lighting a fire, and we hope it would ignite a passion and this fire would really germinate so every school perhaps or local government unit would have local museums or contemporize the way they present these. I hope this exhibit sets an example to inspire others,” Legarda said.