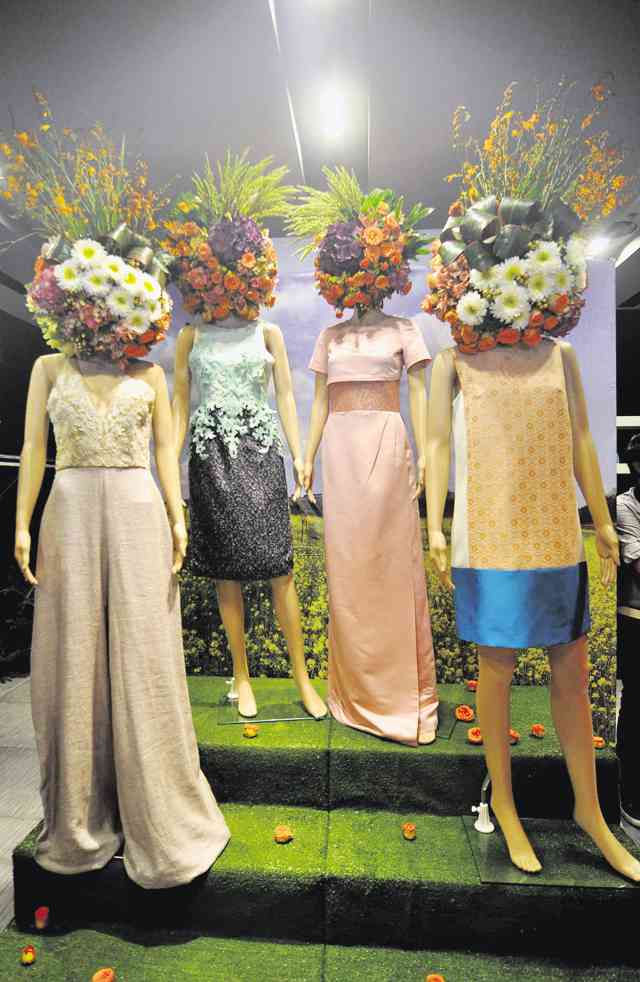 KEY LOOKS from Myth’s featured designers; below, men’s wear made of solid and checkered fabrics by Edwin Ao

For his debut collection for Myth, Cebu-based Ao focused on men’s shirts made from a combination of blue, gray and off-white cotton fabrics and checkered panels.

Unlike in a typical department store, Myth gives its designers a free hand to source materials and execute their respective collections following specific guidelines on inspiration and sizing.

“Because the look of each collection is totally different, customers have a variety of looks to choose from,” said Ruby Gan, COO of ShopManila Inc., the company behind Myth. “We even have a few ankle-length pieces for women who love wearing long dresses.”

And since Ortiz began his career doing made-to-measure clothes, he always encourages his colleagues to put couture elements in the form of beadwork, appliqué and embroidery to their pieces.

“We’re probably offering the next best thing to made-to-measure clothes, at a fraction of the price,” said Gan.

Escober, for instance, mixed lace with such fabrics as tulle and gingham to produce dainty sleeveless dresses that skim the body. One of the collection’s unifying elements was his use of a slim grosgrain belt in black.

Diaz also used a bit of lace in his collection of ice cream-colored dresses with linear panels and see-through elements. Because of their shiny quality, several pieces could easily transition from day to night.

Crisostomo combined solid with floral-printed see-through fabrics in such eye-catching shades as red, canary yellow and tangerine to produce sleeveless numbers. To temper such strong colors, he used off-white as his base.

Apart from the collection’s see-through element, feminine touches were apparent in a particular dress’ tiers and flounces in the hemline and neckline.

Cabahug, meanwhile, opted for muted shades such as peach, cream, silvery gray and off-white. Like most of the other collections, the designer’s dresses were also sleeveless.

His embellishments came in the form of minimal beadwork on one of the dresses’ hemline. With the right styling, Cabahug’s pieces could also work for evening events.

Ortiz went for simple, figure-friendly tunics, draped, wraparound and shift dresses in such versatile colors as rust, ochre, aqua and ivory. Vintage-inspired beadwork was confined to one of the tunics’ neckline.

Tamayo went the other way with a debut collection for Myth that combined a range of textures and colors through such elements as embroidery, appliqué and beadwork. Using printed materials, he was also able to produce several modern faux tweed ensembles.

Just like in the past, Myth asked each designer to produce between four to eight styles. Chances of you bumping into another person wearing the same dress or shirt are minimized, since featured pieces are produced in limited numbers, said Gan.