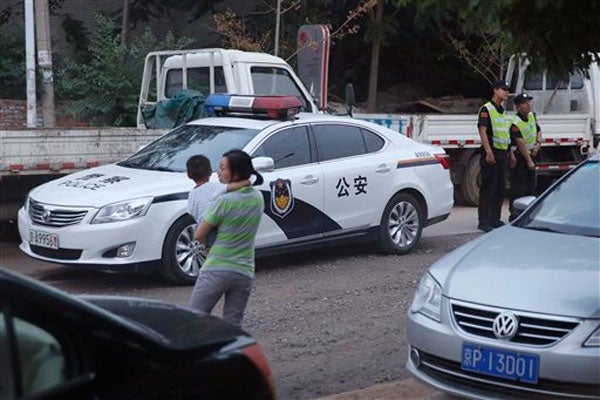 Chinese security guards stand on duty near a police car at a junction leading to the venue for the Beijing Independent Film Festival in Beijing Saturday, Aug. 23, 2014. AP

BEIJING — Chinese authorities blocked an annual independent film festival from opening Saturday, seizing documents and films from organizers and hauling away two event officials in a sign that Beijing is stepping up its already tight ideological controls.

Li Xianting, a film critic and founder of the Li Xianting Film Fund, the organizer of the Beijing Independent Film Festival, said police searched his office and confiscated materials he had gathered over more than 10 years. Li and the festival’s artistic director, Wang Hongwei, were later detained by police, according to their supporters.

The festival, which began in 2006, has seen severe police obstruction over the past few years, but this year’s crackdown is far more serious, Wang said.

“In the past few years, when they forced us to cancel the festival, we just moved it to other places, or delayed the screenings,” he said. “But this year, we cannot carry on with the festival. It is completely forbidden.”

Over the past week, Li posted memos saying government security personnel were pressuring him to cancel the festival, and that he had come under police surveillance.

“It’s very clear that the (President) Xi Jinping regime is determined to control the ideological realm, which has not been emphasized so much for a long time,” said Chris Berry, professor of film studies at King’s College London in England.

But Berry said that China is not new to shutting down independent film festivals, and that the ill treatment of the Beijing festival does not mark the end of the country’s independent filmmaking, as filmmakers have found more venues in an increasingly diverse environment.

The boom in the mainstream movie industry, the rise of galleries that curate artwork based on moving images, and the Internet all have provided new opportunities, he said.

“Let’s not be totally pessimistic,” he said.

Police in the Beijing suburb of Songzhuang, where the event was supposed to open, said Saturday that they were unaware the festival had been canceled. But security was tight at the site, with about two dozen men blocking the area and preventing around 30 film directors and members of the public from entering.

The men, claiming to be villagers, tried to stop anyone from photographing or videotaping the scene, and in a scuffle, broke a video camera an Associated Press journalist was operating and took away another AP journalist’s cellphone. The phone was later returned.

Hu Jie, a movie director who traveled from the eastern city of Nanjing to attend the festival, was upset at the cancellation.

“The audience for my films is already quite small, perhaps because I make documentaries that talk about history,” Hu said. “If one of the rare film festivals, like the Beijing Independent Film festival, is shot down, then it will be very difficult for us to survive as filmmakers.”

Started as a film forum, the festival over the years has grown to be one of the most important events for China’s independent films, but also has attracted the attention of authorities eager to regulate free speech.

In 2012, electricity was cut off shortly after the festival opened, but organizers still managed to show some new movies. Last year, the festival went on, although public screenings were banned.

In the memos that he posted, Li said police put him and the fund’s office under surveillance August 18, when this year’s festival’s poster and schedule were released online.

He said local authorities initially agreed to a compromise that the festival be moved to a town farther out in neighboring Hebei province, but that the management of the hotel where reservations had been made informed the fund on Friday that police were not allowing it to host the festival.

Li said the festival’s executive director, Fan Rong, and Wang were taken away by Songzhuang police on Friday afternoon and forced to sign a letter of promise to cancel the festival, before being freed five hours later. He said employees of the film fund were also informed that the electricity to the office would be cut off starting Saturday.