Drenching and donations–local celebs do it, too | Lifestyle.INQ ❮ ❯ 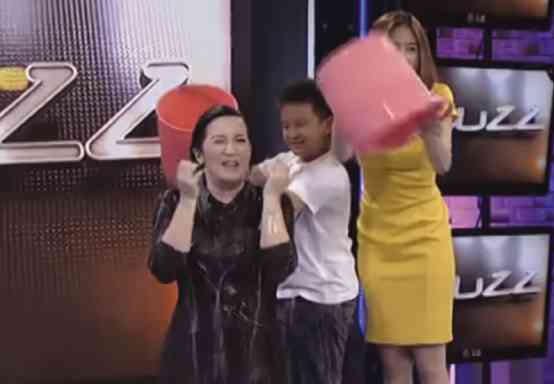 Kris Aquino gets drenched to the bone by son Bimby and “The Buzz” cohost Toni Gonzaga.

Drenching and donations–local celebs do it, too

The ALS Ice Bucket Challenge continues to sweep the world, earning more supporters, and critics, along the way.

Detractors cite reasons for being against the campaign: It’s self-promotional, it focuses more on fun, it’s a waste of water.

But what cannot be argued is the effectiveness of the project in raising funds for amyotrophic lateral sclerosis (ALS) research.

At press time, according to the ALS Association, the donations have reached $88.5 million compared to the $2.6 million raised during the period July 29 to Aug. 26 last year.

In the Philippines, local personalities have hopped on the bandwagon, with actors, musicians, government officials and tycoons choosing to dump (or getting someone else to dump) ice water on their heads and make a donation to alsa.org

Her nominees: Darren Criss, Aga Muhlach and the other coaches of “The Voice of the Philippines”—Sarah Geronimo, Bamboo and apl.de.ap

According to the Broadway star and “The Voice of the Philippines” coach, she wanted to do the challenge for one big reason: her husband’s uncle passed away due to ALS. “It is out of love for him that we’re doing this.”

She said, “If you are going to do the Ice Bucket Challenge, I would urge you to also make a donation to help ALS charities raise money for research into this absolutely devastating disease. On a personal note, we have seen what it can do and how it can impact a family.”

The actor said, “Because I did research on this syndrome, I decided I’ll do both, to raise awareness, to spread the word. I’m gonna drench myself in ice-cold water and at the same time donate.”

He then rattled off his list of nominees who included his wife Charlene who was filming him. “Accepted,” Charlene said, chuckling.

Their son Andres poured an icebox full of water over Aga’s head.

Nominated by: Lea Salonga and Monica

Using the hashtag #iceicebaby, musician and “The Voice of the Philippines” coach apl.de.ap posted his own ice bucket challenge on Facebook. Unlike most buckets we’ve seen used in the challenge, his bucket had so much ice in it that we’re surprised he wasn’t hurt.

Some people choose to take on the bucket challenge in pairs or groups, and newly engaged couple Dantes and Rivera did just that. They took on the challenge and had the contents of a big red cooler dumped on their heads while in a friend’s house.

Dantes then posted the video on Instagram, saying, “I hope that the ultimate purpose of this campaign will reach its goal.”

“The Buzz” co-host Toni Gonzaga and Kris’ son Bimby drenched Kris, who was standing in a kiddie pool in the middle of the set of their show.

Aquino has also donated an additional $300 to alsa.org on behalf of the people she nominated.

Vice Ganda responded to the challenge on his noontime show “It’s Showtime.” After performing the Katy Perry hit song “Hot and Cold,” Vice, wearing a long blonde wig, was drenched with a bucket of cold water.

One of his nominees—“It’s Showtime” director Bobet Vidanes—took on the challenge immediately, getting a bucket of water dumped on his head, live on the same show. “I will take the challenge but I also promise, I will donate $100 sa ALS foundation,” he said, before challenging his children to do the same.

Globe Telecom’s chief operating advisor Peter George Bithos posted a creative ice bucket challenge video. Using the song “Let It Snow” as his soundtrack, he documented his entire experience—from grabbing ice from his freezer and adding water to his cooler to finally pouring the water over his head. Globe CEO Ernest Cu also accepted the challenge, posting his own video on Facebook.

Megaworld Corporation chair and CEO Andrew Tan said, “I support the important cause of  ALS Association to promote awareness about Lou Gehrig’s disease. That is a threat to humanity. That’s why I’m here to take this ice bucket challenge and at the same time, I will make a donation to the movement.”

He was the first Filipino tycoon to participate in the challenge and is said to have given a hefty donation.

AIM’s Steven DeKrey had four security personnel pour four buckets of water over his head. He said, “This challenge is going around the world for those of us who care about this disease and who want to do our part.”

His nominees: Guillermo Aponte of Coca-Cola Philippines and Xian Lim

McDonald’s Philippines president and CEO Kenneth Yang responded to Andrew Tan’s challenge in an awesome way—by donating to alsa.org, matching his donation with another donation to the Ronald McDonald House of Charities Philippines, and then getting Ronald McDonald to douse him with cold water.

“Support a cause you believe in today,” he urged everyone.

Nominated by: Billy Crawford, James Reid, Zhara Banal and others

Only actress Anne Curtis got drenched (by boyfriend Erwann Heussaff) but both of them promised to make a donation to alsa.org.

Teen actors Daniel Padilla and Kathryn Bernardo each got a blue bucket full of ice water dumped on their heads.

Bench chair and CEO Ben Chan didn’t just accept the ice bucket challenge—he got one of the people who nominated him to pour the water over his head.

The video, which Chan posted on his Instagram account, showed a playful Daniel Padilla sitting on a stepladder, ready to drench Chan with water. Chan also promised to make a donation.