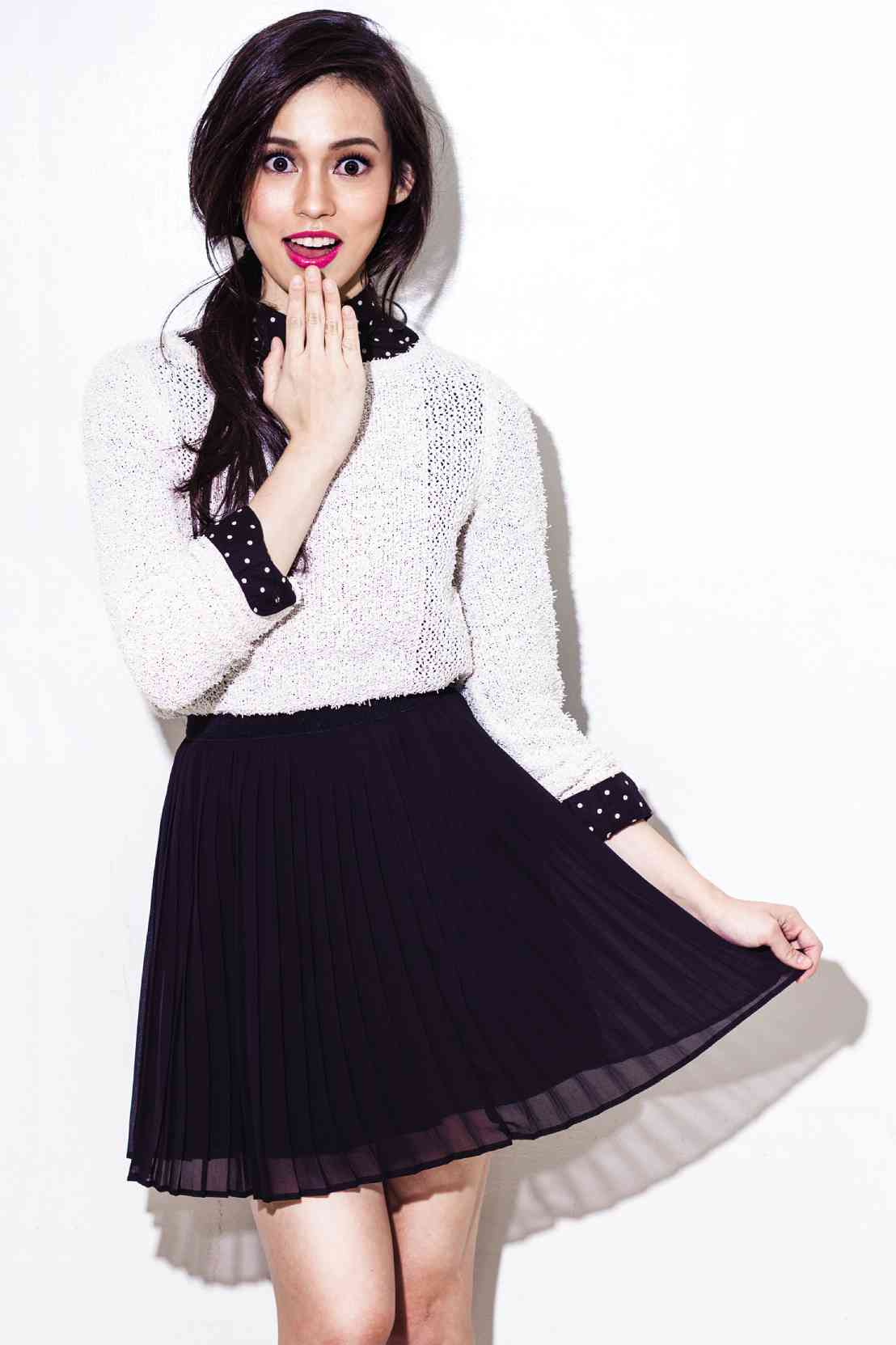 “I think I dreamt of it in a way that all little girls do.”

Twenty-year-old Laura Lehmann has come a long way from admiring beautiful and smart girls on TV to having some heavyweight titles attached to her own name, as well.

But in truth, the Bb. Pilipinas runnerup and Ateneo de Manila courtside reporter never imagined herself on center stage. “I was just a simple student, busy with class and sports,” Laura says.

Previously a Filipino scholar at the International School of Manila, Laura admits to being the stereotypical nerd. For college, she got a full academic scholarship at Occidental College in California. There she took up psychology, neuroscience and Spanish, set on pre-med.

But as it turned out, life had a different plan for her. After a semester in college, Laura came home to Manila for the holidays. This meant several Christmas celebrations, and one Christmas dinner brought her golden ticket.

At one dinner Laura met Louie Heredia, a good friend of the handlers from Aces and Queens—the same beauty boot camp that produced Venus Raj, Shamsey Supsup, Janine Tugonon and Ara Arida. He told Laura  about Binibining Pilipinas and how its doors were wide open to her.

After a good talk with Louie and her mom, Laura took a leap of faith and decided to join the pageant. “I literally said ‘YOLO’ to myself,” Laura says. “I should live a life full of experiences doing what I love.”

Binibining Pilipinas did not only present several opportunities to Laura, but also gave her a whole new family. Since Laura was the youngest of the winners, the other girls always looked out for her and helped her learn the ropes in the industry.

“Having older sisters is really awesome!” Laura says. “They taught me how to pose, put on makeup and many more.”

But on the flipside, training for the pageant took up a lot of Laura’s time. “I needed to have a disciplined lifestyle in terms of eating well, working out and limiting gimmicks,” she says.

She realized that there is a huge misconception out there. Beauty pageants are not all about looking good; they actually require a lot of discipline and sacrifice.

Unlike most of the girls in the pageant who had already won provincial pageants, joined multiple times, did modeling and tried show biz, Laura had never done anything close to this. Thus, she had to work extra hard to learn everything there was to know.  The Aces & Queens training camp led by Jonas Gaffud taught Laura the ABCs of beauty pageant.

Taking on this new role exposed her to a different side of the industry, and also gave her a new incredible family. “The basketball team, the coaches, but especially the student managers have been very welcoming, and we all have a good time even off the court!” says Laura.

Watching the games at courtside gave her an exclusive insider’s perspective. “Inside the locker room, there’s so much intensity and emotion flowing through the team, and it’s exciting watching them execute it all on court,” Laura adds.

However, she admits that the most difficult part of being a courtside reporter is watching the team lose.

“The boys are so admirably dedicated and humble despite their skills and their fame,” says Laura. “They treat each other like brothers, and I think that what they have is something uniquely Ateneo—a community that is just so warm, loyal and supportive.”

Laura knew at the onset that she would be carrying Ateneo’s name. “It’s an amazing school and because of that, I felt like I had a very big legacy to live up to,” she says. “I was so honored to be selected but I definitely felt challenged at the same time.”
To prepare for this  stint, she had to brush up on  basketball and also learn a lot about the
Ateneo team.

ABS-CBN conducted workshops that helped her with reporting. “Our mentor Boom Gonzales is always there to help us out, too,” Laura shares.

“Besides basketball, though, I think I’m just a big sports fan in general,” she adds.

Laura has always been into sports,  hardly the graceful and feminine girl that Binibining Pilipinas called for. She has been playing fast-pitch softball since she was five years old, playing for both the Philippine National Team and the Asia-Pacific Team. “We competed in the World Series in the US, and the Philippines was first runnerup!” Laura says.

With so many things on her plate now, Laura barely has time. Every minute seems like a New York minute. “Most days, I go from class, to a shoot for Binibining, back to class, to the boys’ basketball practice and then to the gym,” she shares.

“But, I truly think that when you do what you love, everything becomes worth it,” Laura reveals. Her passion for Binibining Pilipinas and the courtside community is the only reason she is able to manage and juggle everything.

“It doesn’t feel like work to me. The sacrifice is 100 percent worth it, especially when I make my school happy,” she says.

Asked what or who inspires her, Laura readily replies, “My mom.” Her mom is a single mother who raised her independently. As breadwinner, her mom, Laura feels, is a superwoman who is as strong, disciplined and inspiring as any superhero should be.

As for her personal style, Laura always opts for something comfy. But being in this industry has introduced her to  fashion. “I still opt for comfort, but now I know that comfy can be stylish!” she laughs.

Laura’s successes seem way beyond her years. But, with her beauty, talents and humility, who knows where else she could go? That’s something worth looking forward to.