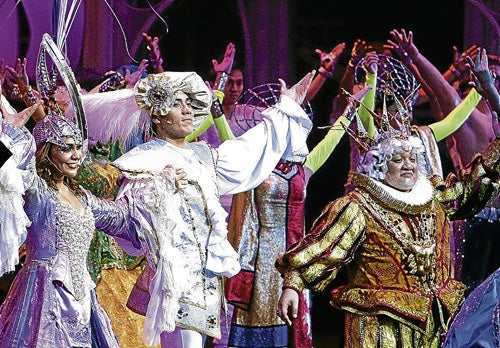 There’s family life in the circus 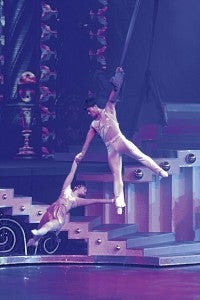 MANILA, Philippines — Who could have thought the gaming enterprise, admittedly adult entertainment, could exist alongside general patronage offerings found in a circus? Few would have taken the risk that ResortsWorld Manila has taken, and succeeded magnificently.

We went to watch “Kaos,” a circus-cum-fairytale in its last two months since it inaugurated the 1500-capacity Newport Performing Arts Theater last December. It ends in May, but already the management has posted sold-out dates until May 25.

Why was the show so popular? Besides using the latest high-tech LED screen as background, “Kaos” displays a hodgepodge of international death-defying acts, Pinoy acting and singing prowess, Chinese and Belarus acrobatic talent, and giant cats on stage, supported by the live music of The Manila Symphony Orchestra, all of which costs a pretty penny. 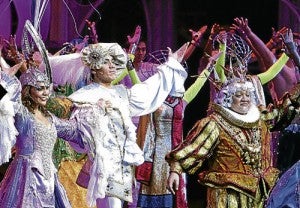 “Kaos,” by the way, is the name of a white lion that performs with Spanish master illusionist Enrique Polo, who has been awarded the highest medal for a circus performer by the King of Spain Juan Carlos. Apart from being a master of large animals, including the yellow tiger Betty and white tiger Sito, who poses for pictures with guests at the end of the show, Enrique does breathtaking magic tricks, like a woman emanating from a cannon suddenly reappearing inside a glass box.

The multitalented artist from Valencia also has a son, Enrique Luna Jr., who is part of what is considered the highlight of “Kaos,” the motorcycle act “Cycle of Life” featuring five cyclists who enter a giant metal ball one by one, until all five are inside riding in precision to avoid crashing into each other. 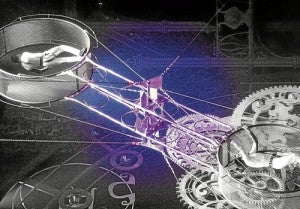 Enrique Jr., 19, has been doing the “Cycle of Life” act for the past three years with the team, tutored by an uncle who has been performing the act for the past 15 years and is still with them. It is second nature to them now, and the team of five has performed in Portugal, France, Malaysia, and now the Philippines.

Enrique says after he finished 10th grade, he went straight to work. At ResortsWorld, he has his mom, dad, sister and aunts with him, all working in various capacities.

Another dangerous offering is the “Human Time Machine,” known elsewhere as the Wheel of Death, where two Colombian stuntmen maneuver two suspended connected rings, a stupendous display of balance and synchronization while defying gravity and physics. Yorbi Andres Baños Polo, 24, is a fast learner, having started only four years ago.

With his partner Juan Carlos Poveda Galeano, Yorbi came to the Philippines not knowing English or Tagalog, but that is what working in the circus has trained them for—to fit in and find instead an opportunity to meet people and learn of another culture, he declares.

Easily the most senior of the foreign performers at Resorts World are the strong men best buddies “Power Duo” (PD) from Belarus, a small country between Poland and Russia with a 10 million population, who were part of the original casino entertainment when the place opened late 2009 as a project of developers Genting of Malaysia and Megaworld in the Philippines. 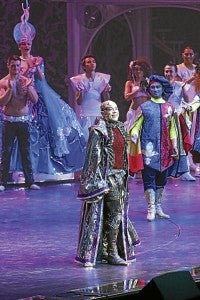 The “Power Duo” Yury Paulushenka and Dzianis (Dennis) Dziamid, in their mid-20s, now have a much larger area in which to show their muscle bound strength and acrobatic balancing prowess. They have been working professionally for more than seven years.

They have traveled to Asia and South America, with Dennis meeting and marrying dancer Natalia on the Star Cruise ship three years ago.

The partners carry each other with ease, standing on each other’s heads or necks, performing various balancing tricks without the aid of a protective net, as do many other acts.

If power and strength are the lure of “Power Duo,” acrobats, lightness, and grace are the draw of the “Defying Gravity” Chinese girl acrobats.

Liang Xue, 23, is among the 16 acrobats from the same town in China. The group has performed in Singapore, Thailand, Malaysia, Indonesia and now the Philippines. She will go where the agent sends them, Xue asserts.

She has no time for loneliness; she is used to being away from family having been sent by parents to a school for acrobats at the age of 7. Like all itinerant workers, the world is her home, colleagues are her family, and no one knows what tomorrow will bring.

All these foreign circus acts are integrated within a fairy tale musical of a handsome prince (Gian Magdangal) in search of true love which he finds in a beautiful maiden (Martha Joy) who lives in the future, so he must go there to win her heart. The obligatory villain is Joel Trinidad as the scheming adviser. 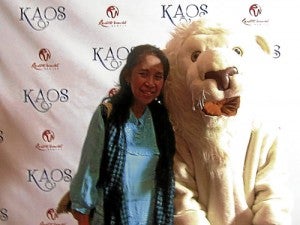 There is an ensemble cast of 28 Filipino and foreign dancers, and 13 Filipino singers in bright colored costumes, as the 16-member MSO under Jed Balsamo plays live music that many local productions can ill afford.

The participation of foreigners, however, does not end on stage. The production team has Andrew Botha from South Africa as set designer, Liudmila Karpinka as costume designer, Khmelnytsky Oleksandr and Donchanka Nataliya as choreographers, and Sviatlana Burkun as production manager.

“Kaos” is certainly entertainment for both kids and adults. Resorts World, through its marvelously effusive VP for entertainment and executive producer Colin Kerr, has discovered the perfect formula.