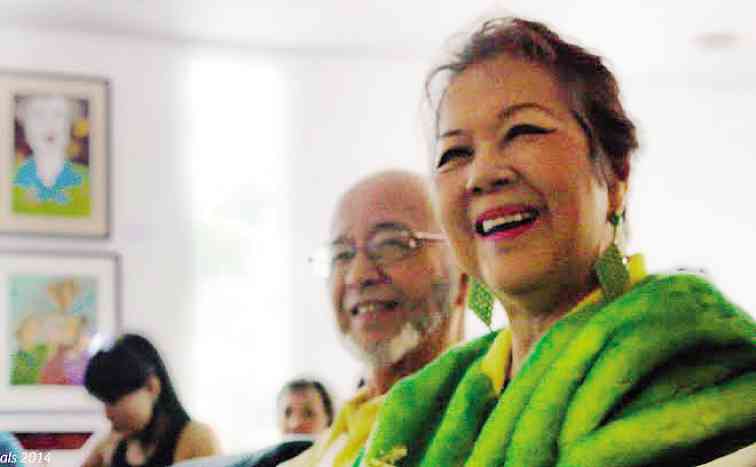 WITH her balae Jose V. Abueva by her side

The (unsuccessful) roasting of Gilda

I’ve never been to any “roasting,” literary or journalistic. I have no idea what goes on at occasions of that kind.

How do you roast a kind soul like writer-painter and cultural icon Gilda Cordero Fernando (GCF)?

When events coordinator Babeth Lolarga and Gou de Jesus asked me what I could contribute, I replied quite frankly that all I could do to “roast” Gilda was a literal bagful of charcoal, with lighter and fluid to boot (as suggested by poet Ricky de Ungria on FB).

My arsenal of biting irony and sarcasm was already emptied when I dumped them on someone who did not proclaim Nora Aunor as National Artist. And it can’t possibly apply to Gilda. I have loved the writer so much since my high school days, and joining that “roast” is tantamount to parricide.

Hence, on the afternoon of Aug. 9, a Saturday, at Silverlens Gallery, where Gilda’s exhibit was coming to a close, I came to cover her, literally and figuratively, not to take part in the roast.

Before the guests arrived, I took one last look at her paintings, the subjects of which were like characters from her short stories.

There is a familiar society figure in her “Fashion Maven” who could have been a character from her short story, “High Fashion.”

You can smell hearth and home in such works as “My Beloved,” “Bedtime with Family” and “Sleepless Mom with Child.” You can sense veiled disdain in such pieces as “Beauties at the Church Door,” “The Terrible Two” and several variations of “The Aliens Are Coming.”

I can still imagine Gilda capable of extreme madness, like the multi-breasted figure, “Mebuya and The Goddess of the Underworld.”

When Gilda arrived, she looked like she was in fur, swathed in light green and almost yellow hues, like a costume from “Pinocchio.”

As it turned out, “The Roasting” attracted substantial figures from the writer’s milieu.

The mood was conveyed by the opening dance solo of Myra Beltran to the music of Piazzola.

With Gou de Jesus and Kris Lacaba as emcees, the roasting looked like it lacked charcoal to keep the fire burning, with the roasters sounding more like pages from the common essay, “The Gilda I Knew From Way Back When.”

From the beginning, “roaster” Ventura made it clear she would be very kind. She recalled the years they were still into ballroom dancing. She remembered how a DI lifted Gilda in what looked like a crucial pas de deux , only for the writer-dancer to realize she forgot her underwear.

Poet Garcellano said he couldn’t understand this effort to make Gilda a candidate for National Artist even as he knew her works could speak for themselves. In the end, the poet ended up roasting the people behind the National Artist Awards. Concluded Garcellano: “I have the feeling they are all crazy over these awards to get a free state funeral.”
Eco-warrior
The roasters succeeded in portraying Gilda in her various involvement as eco-warrior and friend of political prisoners.

Ocampo recalled Gilda’s burgis food every time she visited him at Camp Crame.

Baboo Mondoñedo recalled a perennially concerned Gilda during their trip to Sagada.

But the most well-received roasting was that by grandson, Franco Regalado. He recalled his early childhood days running around the Fernando abode. At one time, his Lola Gilda asked him to join her in a meditation session just after lunch. For not behaving, he recalled getting countless kurot (pinching”) from Lola.

Indeed, it wasn’t. The speakers’ recollections of Gilda sounded more like paeans of love from friends who didn’t see her as a subject fit for roasting.

I can’t roast her, either. I recall the time she watched pianist Cecile Licad and cellist Antonio Meneses in an intimate concert in San Antonio, Zambales, in a garden setting. She overheard the pianist turn to me and say, “Pablo, please buy me (sanitary) napkin quickly, or else this Beethoven sonata will flow onstage.”
“Pati ba naman ’yan ginagawa mo, Pablo,” Gilda snickered at me.

I said I liked doing these things for an artist, especially of her caliber. I could run errands for Gilda, too.

I didn’t tell her that the first time I set foot in Manila decades ago, my dream was to meet the author of “The Butcher, The Baker and The Candlestick Maker.”

For the same reason, I can’t imagine myself roasting her—even in my dreams.

As Chit Roces-Santos wrote, “But how, pray tell, does one do that in our culture? One simply does not. Here we have eulogies instead. Anyway, it’s only fitting. Gilda already had her wake.”