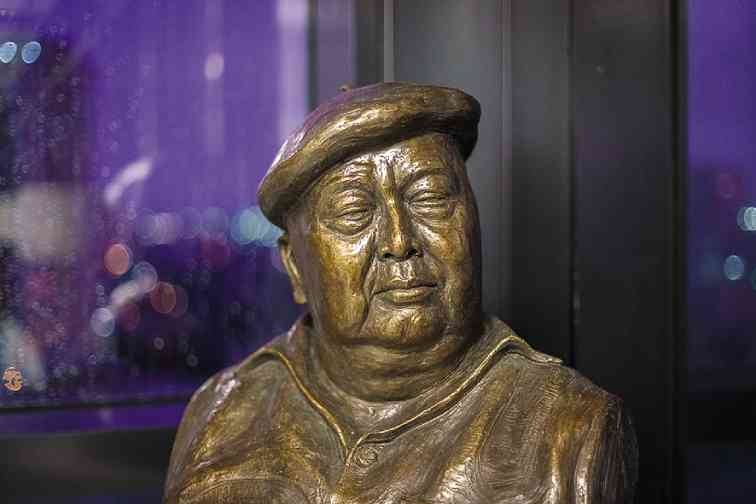 Bust of the writer by top sculptor Julie Lluch

National Artist for Literature F. Sionil José is a formidable name in literature.

José recently turned over his prized collection of manuscripts and favorite books to De La Salle University Libraries.  The collection is housed at the Learning Commons of the Henry Sy Sr. Hall.

Part of the collection included signed copies of books written by friends, and his selection of 100 recommended books.

While growing up, José said he was moved by Rizal’s works that depicted the injustices of the Spanish colonial rule. He said the novels influenced his works greatly.

He said he read “Don Quixote” and “My Antonia” when he was 10 years old, for leisure.

“I read ‘Don Quixote’ as a kid for entertainment because I wanted to know what will happen to that crazy old man [in the novel],” he said. “I missed all the profundity in that novel because I was just basically following the narrative. But ‘Don Quixote’ is a good model for creating narrative tension.”

“My Antonia” is a very tender love story of adolescence and growing up, José noted.

“‘My Antonia’ is a beautiful story about a young boy and a young girl, but it is underrated and nothing sexual really happens,” he said. “The writing is beautiful, but I was more interested in the plot. It was only later I discovered Cather was a beautiful writer.”

José was not one to mince his words, and he did not hold back in saying that Ernest Hemingway was a lousy and overrated American writer. The only Hemingway novel he likes is “For Whom the Bell Tolls.”

“[Hemingway’s] ‘The Sun Also Rises’ became a hit back in the ’20s, but it is such a lousy novel,” he said. “It is very mannered and very dull. The dialogue in the novel, in which Hemingway was supposed to excel, I found boring.”

“I do not like poets who are tone-deaf, because all languages have certain rhythms and music,” he said.

Although he did not include them on his Top 101 list, he said he enjoyed the works of Filipino poets Ricardo de Ungria, Ramon Sunico and Mookie Katigbak-Lacuesta.

There were a lot of novels that inspired the creation of the Rosales Saga. Among them were Rizal’s novels, John Steinbeck’s “The Wayward Bus,” and Victor Hugo’s “Les Miserables.”

He said Albert Camus’ “The Plague” inspired him to write a short story that would eventually become “The Feet of Juan Bacnag.” Thornton Wilder’s “The Bridge of San Luis Rey” sparked the idea for his novel “Gagamba,” he said

Amid literary fads and artistic trends, José said it was easy for what’s phony to be accepted as legitimate because of media hype. (In this he sounds like Holden Caulfield in “Catcher in the Rye,” which he also puts on his list. J.D. Salinger’s famous character is fond of inveighing against the phonies of the world.)

His frequent advice to aspiring writers is to start with the classics.

“It is good to be grounded in the classics because at the end of the day you will find out there is nothing new to write about,” he said. “All the issues about life-death philosophy had been discussed 3,000 years ago. And we are discussing them now. We are giving them new labels and names. The human dilemmas have not changed, but the technology has changed  a lot.”

He said his teacher at University of Santo Tomas,  Paz Latorena, one of the matriarchs of Philippine writers in English, grounded her students in the classics.

He underscored the importance of studying Asian philosophy (Hinduism, for instance) because “it teaches people how to die.”

“When technology changes, manners, morals, customs have to adapt,” he said. “You should not confine yourself to your own culture so you would have a better understanding of other civilizations.”