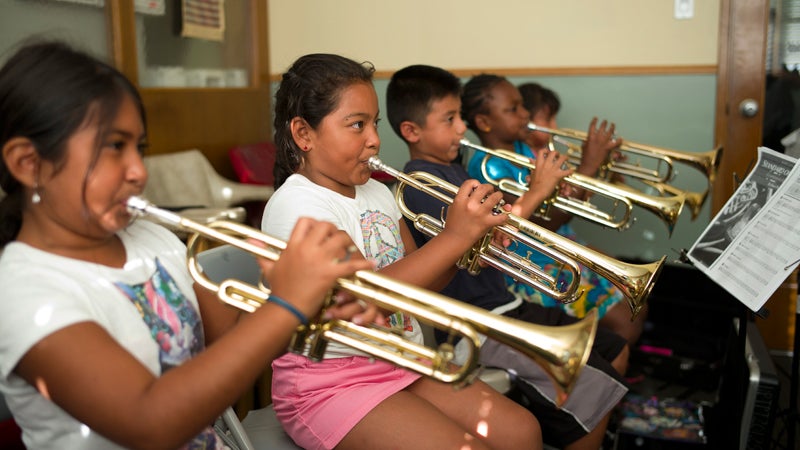 Arielle Dominguez, from left, Elizabeth Lopez, Andres Lopez, Azariah Wright and Katie Bella play their trumpets during a lesson offered by Harmony Project, a Los Angeles-based nonprofit that provides free music lessons to low-income students, Thursday, Aug. 28, 2014, in Los Angeles. A two-year study of dozens of schoolchildren from disadvantaged Los Angeles neighborhoods shows that music training changes the brain in ways that make it easier for youngsters to process sounds, according to results reported in Tuesday's edition of the journal Neuroscience. (AP Photo/Jae C. Hong)

LOS ANGELES — The founder of a Los Angeles-based nonprofit that provides free music lessons to low-income students from gang-ridden neighborhoods began to notice several years ago a hopeful sign: Kids were graduating high school and heading off to UCLA, Tulane and other big universities.

That’s when Margaret Martin asked how the children in the Harmony Project were beating the odds.

Researchers at Northwestern University in Illinois believe that the students’ music training played a role in their educational achievement, helping as Martin noticed 90 percent of them graduate from high school while 50 percent or more didn’t from those same neighborhoods.

A two-year study of 44 children in the program shows that the training changes the brain in ways that make it easier for youngsters to process sounds, according to results reported in Tuesday’s edition of The Journal of Neuroscience. That increased ability, the researchers say, is linked directly to improved skills in such subjects as reading and speech.

But, there is one catch: People have to actually play an instrument to get smarter. They can’t just crank up the tunes on their iPod.

Nina Kraus, the study’s lead researcher and director of Northwestern’s auditory neuroscience laboratory, compared the difference to that of building up one’s body through exercise. “I like to say to people: You’re not going to get physically fit just watching sports,” she said.

Kraus said studies like hers are challenging because researchers need to follow subjects for years in order to track changes in the brain. She said more and larger studies need to be done in a variety of districts around the country to “help us understand what are the most effective forms of learning and how might learning be tailored for an individual child.”

The latest findings are striking a chord with supporters of such programs who say music is frequently the first cut for school boards looking to save money.

“Over and over, we’ve learned that children need rich, multisensory environments, and learning music sort of brings all of that into a package for them,” said Mary Luehrsen of the National Association of Music Merchants Foundation, which awards scholarships and research grants for the study of music, adding that the results make the point that music training should be an important part of all school curriculums.

April Benasich, a professor of neuroscience at Rutgers University who was not involved in the study, said previous research by Kraus has demonstrated the value of music is improving concentration, memory and focus in children.

Benasich, who researches early brain development, said the study’s findings are “a game-changer for both the scientific and public policy domains, particularly in an era when these sorts of enrichment activities are being aggressively eliminated from our schools.

Martin approached the National Institutes of Health, seeking to learn if there was a connection between music and the educational achievements of the program’s 2,000 students. The NIH put her in touch with Kraus, who studies the changes in the brain that occur through auditory exposure. Many of Harmony Project’s students have no interest in pursuing professional music careers, Martin said.

Ricardo Torriz, 13, wants to be an engineer. He took up the trumpet and is learning salsa, jazz and classical music. “I wanted to take up the trumpet so I could play in a band like my dad,” he said.

Researchers studied the students over two years, attaching scalp electrodes to monitor changes in their brains. Test subjects were selected at random from those on a waiting list to enter the program, hopefully ensuring all test subjects would be equally motivated to work hard.

One of the researchers’ key findings was that one year of musical training didn’t make a difference in brain changes. Two years did. “We know that a fundamental characteristic of the nervous system is our ability to change as we age, as we interact with our environment. But we can’t be changing every second or you’d have a very unstable system,” Kraus said.

At the Harmony Project one afternoon last week, the building quickly began to fill with a cacophony of sounds of clarinets, trombones, oboes and other wind instruments as players warmed up. At an adjacent building, cellos were being tuned.

Adelina Flores, whose 11-year-old daughter, America, was a test subject, said she wasn’t surprised by the results. Her daughter had already told her she was getting better at math because playing music had taught her to divide notes into fractions and count them out in measures.

“She’s improved a lot through this,” Adelina Flores said, adding, “And she’s grown to be more confident too.”