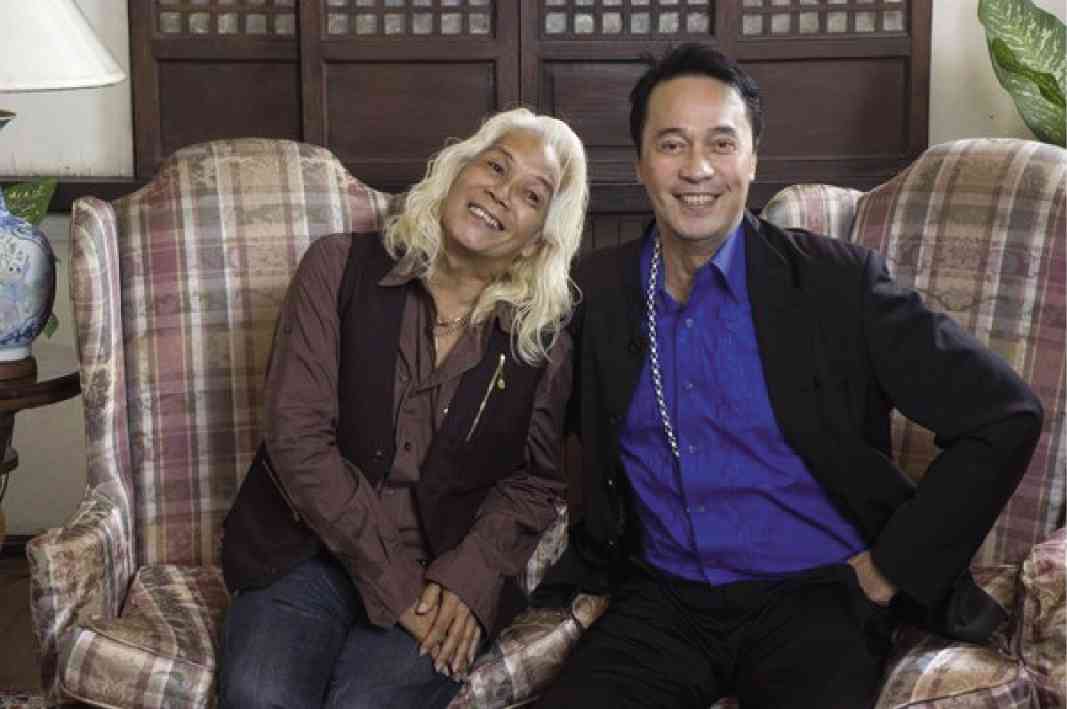 TOGETHER FOREVER. Designer Ernest Santiago and Bobby Caballero, now together in the afterlife

When ’70s fashion extravaganza was synonymous with one name: Bobby Caballero

It was 1972 when I first met Bobby Caballero. Martial law was only a few months old, and I was barely 15, on a Christmas school break from La Salle Green Hills. Auggie Cordero took me to Nayong Pilipino that cool December night to assist him for a dress rehearsal for “Bagong Anyo,” Imelda Marcos’ fashion show meant to end all fashion shows.

What I saw when I got there would turn out to be the biggest, most extravagant fashion-dance-song spectacle in Philippine history.

At the center of the mammoth, multileveled bamboo stage designed by Arturo Cruz, studded with a thousand light bulbs, was Bobby having a meeting with 200 artistas, socialites, beauty queens and professional models—plus nearly 100 members of the Bayanihan Dance Company, the Bagong Lipunan Choir, 500 singers from the Government Service Insurance System and other government agencies, and the Philippine Philharmonic Orchestra.

Bagong Anyo’s superstars were the handpicked 50 fashion designers who were doing modern Filipiniana.

Caballero was tall, smart and handsome. He had a modulated voice and was in full control, microphone in hand.

Beside him was Gary Flores who was codirecting the show.

Bagong Anyo was the brainchild of the former first lady. A month before the event, she summoned Cordero and 49 other designers—from the established ones like Pitoy Moreno, Ben Farrales and Aureo Alonzo to young turks Joe Salazar, Rusty Lopez and Ernest Santiago—to Malacañang.

In a grand meeting attended by textile manufacturers, handicraft and accessory exporters, and the wives of  Armed Forces officers, she announced that she wanted to promote Philippine fashion in her livelihood program “Sariling Atin.”

Imelda believed that Filipino fashion could be world-class and competitive. She said that world leaders and the international jet set always marveled  at her piña and jusi embroidered ternos by Ramon Valera, which she wore with such flair.

The show premiered at Nayong Pilipino on Dec. 18, 1972, followed by a gala at the Cultural Center of the Philippines (CCP) on Dec. 30.
More than two hours long, it was a fashion blockbuster for the 20,000 folk who watched it al fresco at Nayong Pilipino.

At CCP, it was a standing-room-only affair. Nora Aunor singing “Pilipinas Kong Mahal” at the finale drew a standing ovation.

The show was inspired by traditional Filipiniana costumes and by regional culture, which the Bayanihan dancers would introduce in their signature breathtaking numbers.

To the sounds of gongs and drums, the show opened with an Igorot suite, followed by the designers’ modern take on Mountain Province traditional garb using Ifugao weaves.

The Maria Clara portion was made more unforgettable by the song “Cafe Regio’s” by Isaac Hayes, with its iconic choreography that any baby-boomer bakla remembers with happy nostalgia.

The terno, bridal gowns, children’s apparel and evening formals segments were followed by a new generation that had disco dancers all clad in brushed denim and carrying hundreds of balloons, which they released to a display of fireworks in the sky.

Bagong Anyo ran yearly from 1972 to 1977, continually tweaked but regarded as the ultimate showcase of Imelda’s penchant for local designer finery.

The ’70s was the final decade of the Golden Age of Filipino fashion, which started in the ’40s when it was de rigueur to wear the national costume as formal wear.

It was a time when Filipino fashion design was young, innocent and on par with New York, London and Paris.

Atendido recalls how all these came about: “Bobby rose to prominence as a choreographer when his presentations for Song Fest, the UAAP of intercollegiate choral singing contests, won first prize. When San Sebastian won two years in a row, I hired him to choreograph some numbers in the controversial musical ‘Hair’ which I was directing at UP.”

Flores was in the cast of that musical. Caballero was also with the Filipinescas Dance Troupe where he polished his precision for dance and drama.

It was around this time that Chito Madrigal, PR directress of the Hyatt Regency, hired Caballero and Flores to choreograph and direct luncheon fashion shows at La Concha, the penthouse of the hotel. It ushered the era of beautiful models like Marilen Ojeda, Jane Umali, Ces Artadi, Yvonne del Prado and my sister Gina Leviste, who were paid P8 a day for their work.

It was the fashion show soundtrack that tightened the whole package. It was current and hip—disco mixed with old standards, requiring pirouettes and half-turns done in eight-count precision.

From 1972 to the mid-’80s, choreographed fashion shows were the “in” thing. Ladies who lunched loved it, and at night, designers held one-man gala shows at Philippine Plaza. After the shows, they would head to Ernest Santiago’s Coco Banana to boogie till dawn.

Santiago and Caballero became close collaborators on many of Santiago’s ventures, such as a bar on Remedios Circle called Zee Zee, and Santiago’s clothing lines like Tiago and Santiago de Manila.

At the Ramon Valera Awards, Caballero also choreographed Santiago’s winning entry, a slow-motion dance of models in barong and Igorot bahag, followed by those in embroidered piña Maria Clara to the crashing sound of drums from the movie “Mandingo.”

Many theme parties of Coco Banana were Caballero’s brainchild. It was he who coined the club’s tagline: “The World Knows Where We Are.”

At one point we all traveled as a family on rented jets to attend the Ati-Atihan—the entire posse made up of Ramon San Agustin, Henri Calayag, Philip Flores, Denni Tan, Petussa Lopez and Quito Cu-unjieng. Bobby and Ernest were like brains and brawn—the nitro to the glycerin.

Together, this dynamic duo created unforgettable projects and fashion presentations, the penultimate of which was the grand fashion show called Santiago at Fort Santiago. Not surprisingly, it was the gala night presentation of Imelda for her then VIP foreign guests, led by the king and queen of Spain, Juan Carlos and Sophia.

Imee Marcos’ dramatic entrance fashionably upstaged everyone, wearing Santiago’s galactic neo-Maria Clara, seen as statement of defiance of her mother. This happened in the wake of the kidnapping of her then fiancé Tommy Manotoc.

Now Santiago and Caballero are both in heaven. They will always light up the dark hours for us who are left to go on living.

Bobby Caballero, also a foremost advertising man who spearheaded the iconic PAL campaign “Shining Through,” died last Sunday night, of pulmonary causes, after a see-saw battle with leukemia. His ashes were interred this morning.