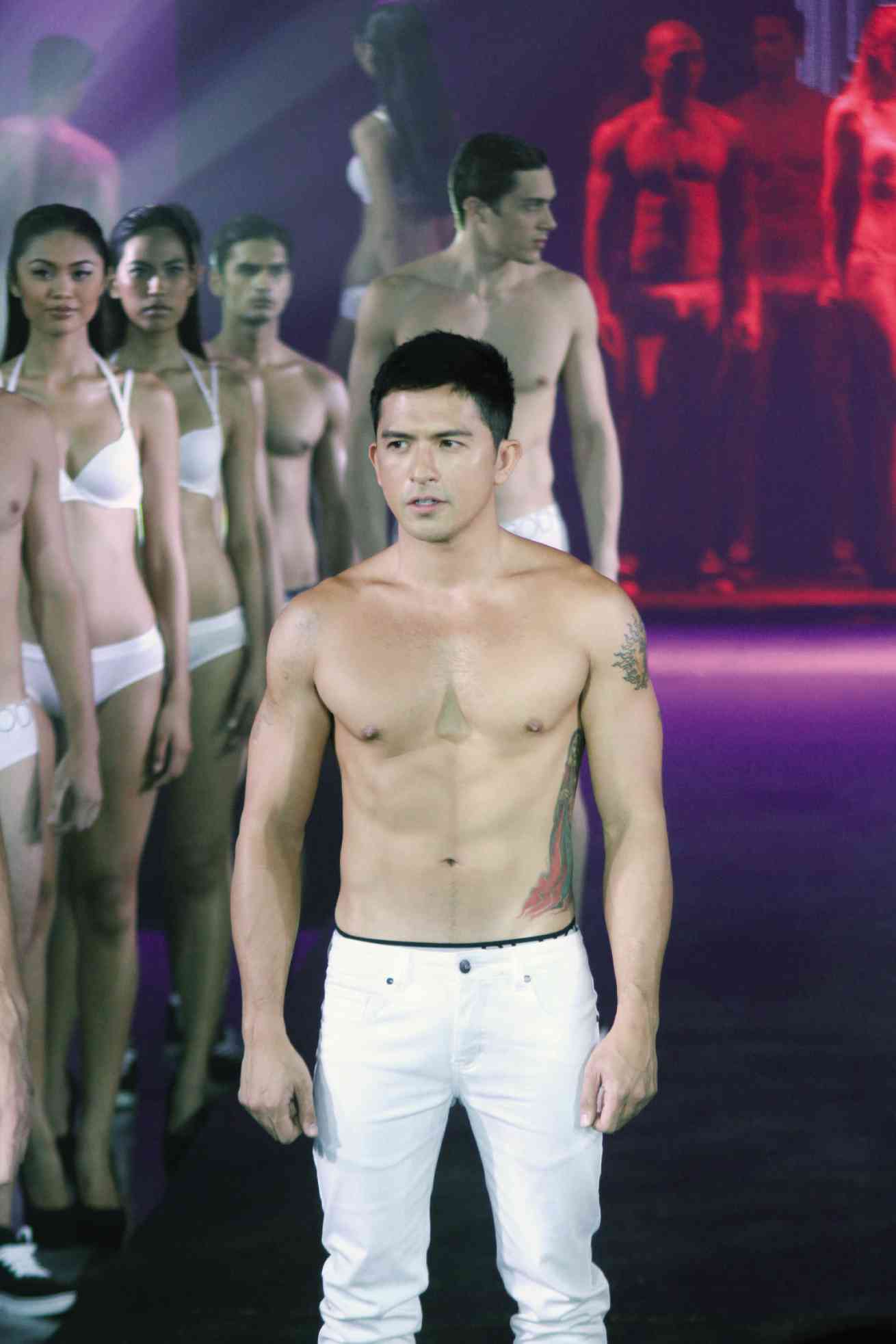 DENNIS Trillo and Tom Rodriguez, who played gay lovers in the hit TV soap “My Husband’s Lover,” will reunite onstage and delight fans in “The Naked Truth.” PHOTOS BY CHITO VECINA

The heat is on, and it’s bound to get even hotter as Bench’s popular denim and underwear event featuring a new set of models draws closer.

Three weeks before Bench’s  “The Naked Truth,” the country’s leading lifestyle and ready-to-wear brand gave journalists a sneak peek into what must be the most ambitious edition of its biennial show, this time at the SM Mall of Asia Arena.

Except for Harvard, who wore a white top with matching panties, the boys slipped into low-slung white jeans and black Bench Body underwear with broad waistbands peeking from their pants.

Naked from the waist up, they didn’t have to strip down to titillate the audience. Their broad shoulders, rippling muscles and six-pack abs were enough to drive women and gays into a frenzy.

Marian Rivera will also be in “The Naked Truth.”

You’ll be seeing more of the Bench Body Boys literally, as they promised to go more daring for fans at the MOA Arena.

“I’m really working out and eating right,” said Stroem, a Filipino-Norwegian jazz singer who has starred in musicals mounted by Atlantis Productions. “I just hope my body is ready by that time.”

Stroem has a marketing and hotel management degree from Switzerland. Aside from speaking English, he claims to be conversant in Filipino, Norwegian, French, Spanish and German.

Stroem looks younger than his age, 27. He landed in people’s living rooms seasons ago by joining “Pilipinas Got Talent.”

Van Opstal, 22, a varsity player of De La Salle University, said his ripped body is the result of hours of training in the gym and seeing action on the hard court.

“I go to the gym a lot, but I train for strength, not for aesthetics,” said the 6’9” Filipino-Dutch-German center. “But I have been working out my abs a lot lately. I’m definitely going to show more.”

Roque, who was in the daytime soap “Moon of Desire,” stressed the importance of having a “cheat day” while working out to achieve his Bench body.

“I go on a cheat day at least twice a week,” he said. “It motivates me to be more disciplined and to work out harder. I just want to look lean with abs and muscles in the right places. I can’t bulk up because it doesn’t look good on TV.”

Just make sure to have your camera phones fully charged, as Roque and Del Rosario promised to ditch their jeans in favor of their favorite Bench underwear.

For some reason, model-DJ Jeff Langan didn’t make it as a Bench Body Boy. With his toned body and boy-next-door looks, Langan is also bound to make temperatures rise.

Nonetheless, the Filipino-American heartthrob, who was discovered by Bench through his Instagram account, will also go barely legal in “Naked Truth.”

Other first-time Bench eye candies to watch are Daniel Padilla (will he or won’t he strip?), Kathryn Bernardo, Solenn Heussaff and Julia Montes.

“The show is still a work in progress,” said Manapat. “We may fail or we may succeed, but we can’t be faulted for not trying to give the public something new.”

Unlike in previous editions where each segment is devoted to a single designer, this time there will be a mix of fashion, theater, video and music throughout the show.

Only one segment will be devoted to Dubai-based Michael Cinco, as he launches an exclusive line for Bench.

Apart from director and Bench regular Robby Carmona, people behind the show led by Ben Chan, Suyen’s board chair, have tapped Canadian Gypsy Schneider to codirect “The Naked Truth.”

“We want a show with a different flavor, but it can’t be just a straight theatrical production,” said Manapat. “Since Gypsy is a foreigner, she isn’t familiar with local celebrities as well as with sequence and orientation.”

“Since we’ve been doing big shows for more than a decade now, we wanted to give people something different,” Manapat added. “This time we’re working with several production teams based on past shows and videos we like.”

Also onboard is Montreal-based Canadian team Seven Doigts, who would do the stunts and choreography. Chan decided to hire the group after seeing their work in the latest Broadway restaging of “Pippin.”

Joining them are Canadian band Geodesics and famed Dutch lighting designer Nol van Genuchten, who did the lights for such epic Cirque du Soleil productions as “O,” “La Nouba,” “Dralion” and “Saltimbanco.”

To add visual spice, Bench is flying in 12 models from New York.

“Since most of the people involved are based abroad, we’ve been doing a series of meetings almost every night via Skype,” said Manapat. “The first time everybody would be in Manila is Sept. 16. It seems like we will be working up to the last minute to get everything right.”