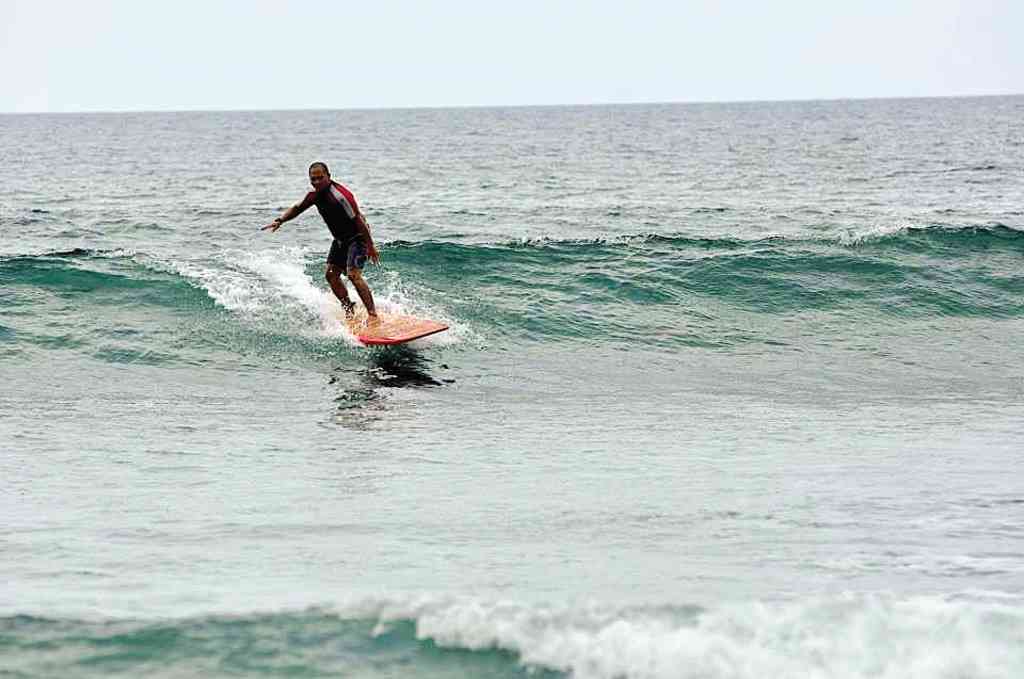 ‘SURFER GENERAL’ The newly named Acting Solicitor General Florin Hilbay riding the waves during one of his weekend surfing breaks in Zambales. “Floating on water,” he says, “during sunset or sunrise... It’s the closest thing to a spiritual experience.” FLORIN HILBAY’S FACEBOOK PAGE

MANILA, Philippines—If you come to visit the new chief government lawyer, he’ll welcome you to the “Office of the Surfer General.”

Apart from being a constitutional expert tapped to defend the government when it gets into legal tangles, acting Solicitor General Florin Hilbay is a weekend surfer, turning to the sport to take his mind off work for a while and reach that near-spiritual high.

“I’m an addict,” Hilbay, 40, told the Inquirer in his ninth-floor office in Makati City on Wednesday in his first interview since his appointment on Aug. 20.

Hilbay, a University of the Philippines law professor and Yale Master of Laws graduate, first mounted the surfboard in 2010, at 36 years old. He was first drawn to skimboarding during a visit to the beaches of Pagudpud town, Ilocos Norte province, when he realized that “it’s a sport for teenagers.”

It didn’t take long for him to find out that surfing was a better fit for his age: “Because guys as old as 70 can surf.”

“I really got fixated with the idea because there’s a different culture, there’s a very deep tradition. It matches my temperament, my love for the beach,” said Hilbay, who would take long drives to surf spots off Zambales province and Baler town, Aurora province, to get his fix about twice a month.

Hilbay, who also loves photography and once, during his long-hair days in college, thought of becoming a full-time musician, said riding the wave gave him a peculiar kind of high.

“The term is ‘stoke.’ It’s very difficult to define. It’s the high that you feel, paddling out with the lineup, and then sitting on a board, basically floating on water during sunset or sunrise… It’s the closest thing to a spiritual experience, if not an out-and-out spiritual experience,” Hilbay said.

“And then, of course, catching the wave, paddling like crazy, committing to the break, requires a lot of grit and passion. So it’s really exciting. And the rush lasts for hours, especially if you get a very good wave,” he said wide-eyed, as if imagining himself just about to catch a big one.

Even with the expected demand of his new job, Hilbay hopes he can still retreat to the beach once in a while.

“Now, I don’t know if I can balance it … of course, this is a 24/7 job. Maybe on weekends I can still do it,” said Hilbay, who owns four surfboards.

He got the post last month after the appointment of his former boss, Francis Jardeleza, to the Supreme Court. He had been senior state solicitor on secondment from his alma mater, the University of the Philippines College of Law, where he has been a faculty member since 2000.

He was Jardeleza’s point man for major government cases, including the divisive reproductive health law and the controversial Disbursement Acceleration Program (DAP) and Priority Development Assistance Fund (PDAF). Hilbay is also the principal lawyer handling the cases involving opposition to the proposed Bangsamoro autonomous region and the Enhanced Defense Cooperation Agreement (Edca) between the Philippines and the United States.

While working at the Office of the Solicitor General (OSG) for only a year and a half, Hilbay, who topped the bar in 1999, said the work as government counsel ran deep in his blood, having been mentored by retired Supreme Court Associate Justice Vicente Mendoza, who had served as solicitor and as assistant solicitor general.

He also served at the OSG under former Solicitor General Simeon Marcelo in 2002.

“I’d say I’ve been preparing for this job for about 15 years now. Because when I worked in the Supreme Court (from 1999 to 2000), I was really inspired by Justice Mendoza, I knew then and there I wanted to work for the OSG,” he said.

15 years in the making

“Of course, it’s a dream to become a SolGen. So during the turnover ceremonies last week, I told them (his colleagues) that this is a dream that’s 15 years in the making. There’s still that cognitive dissonance, when dream and reality mix, join forces. It’s really very difficult to internalize the situation. So it’s a bit overwhelming, of course,” said Hilbay, the youngest chief government counsel since the late Frank Chavez.

Hilbay explained that he could be appointed only in an acting capacity because he lacked six months more of the requisite 15 years of law experience to be named a full-fledged solicitor general.

Under Republic Act No. 9417, a 2006 law that strengthened the OSG through increased wages and upgraded qualifications, a solicitor general should be at least 40 years old and must have at least 15 years of law practice. Hilbay has been practicing for just 14 and a half years.

Asked if he may later take on the post in full-fledged capacity, Hilbay said: “If the President so desires.”

Buckling down to work as soon as he was appointed, Hilbay is expecting to argue his first major case this month.

“Biggest test of my term will be the Edca. We will be filing the comment of the Republic next month, and most likely oral arguments will follow within the month,” said Hilbay, who has been handling the case since he was senior state solicitor.

The Edca, an executive agreement between the Philippine and the US governments that allows US troops greater access to Philippine military bases, has been challenged in the Supreme Court for alleged violations of the Constitution.

“We’re already very prepared. The only difference is, this time, I’ll be arguing as SolGen,” Hilbay said.