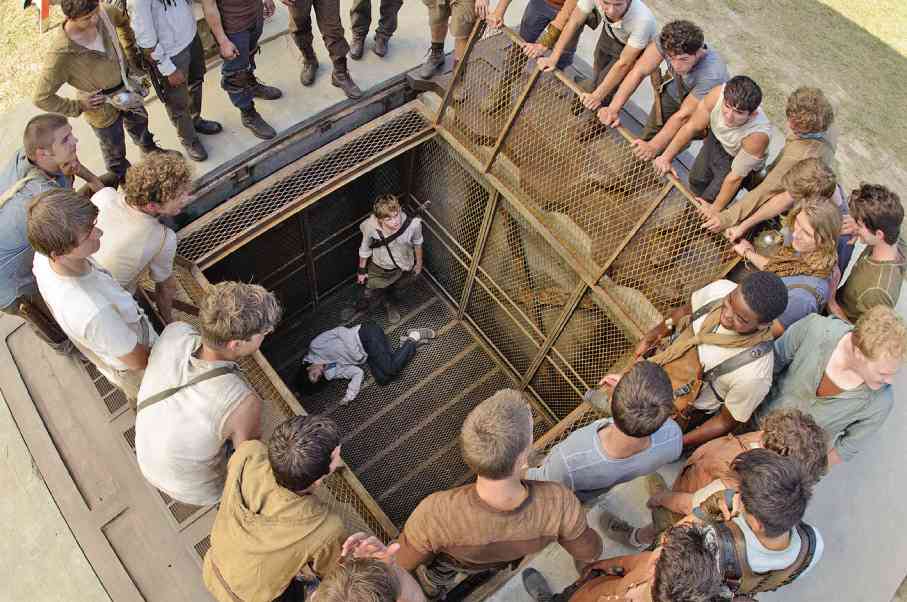 THE GLADERS are astonished to discover that the newest and last person sent to the Glade is a girl. PHOTOS COURTESY OF 20TH CENTURY FOX

‘Maze Runner’ film version is a shot of adrenaline

With a plethora of dystopian teen films saturating theaters in recent years—worldwide blockbuster “The Hunger Games,” “Divergent” and star-studded “The Giver,” to name a few—moviegoers are wont to dismiss “The Maze Runner” as just another young-adult book adaptation trying to capitalize on its predecessors’ success and fame.

To be fair, it isn’t a totally baseless judgment. “The Maze Runner” has all the ingredients of a dystopian, adventure, teen novel: A story set in a futuristic, authoritarian society in the aftermath of an environmental, man-made catastrophe; a confused but brave teenage hero; and a battle for freedom and survival.

But what sets “The Maze Runner” apart is its faithfulness to the spirit of the book it’s based on, American author James Dashner’s 2009 novel of the same name. Even with all the changes in the narrative.

Inquirer Super, along with more than a hundred fans of Dashner’s novel (the first in a trilogy), watched “The Maze Runner” last month in a special advance screening, weeks before its Philippine premiere on Sept. 17. (See related story above.)

“The Maze Runner” tells the story of Thomas (Dylan O’Brien), a teenage boy who finds himself in a mysterious place called the Glade, home to about 40 other teenage boys who call themselves Gladers.

The Glade is enclosed by towering walls, and is smack in the middle of a mind-bogglingly complex, ever-rotating maze. And like some modern version of Daedalus’ Labyrinth in the Greek myth of Theseus and the Minotaur, the maze harbors deadly monsters called Grievers.

Thomas and the Gladers must find a way out of the maze, especially when the mysterious puppet masters of this lethal game send another teenager to the Glade—this time, a girl. Time is running out, and they have to choose whether to wait for death to come or run into the maze, face the Grievers and fight for their survival.

“The Maze Runner” movie is like a shot of adrenaline— thrilling and fun, with shockers and some well-placed humor in the mix. Fast-paced and action-packed, the film stays true to Dashner’s high-octane storytelling.

Wes Ball, the film’s director, should be lauded for bringing successfully to life Dashner’s bleak, larger-than-life world. The world-building in this film is just fantastic, as if the maze and the Glade jumped out of the novel fully formed.

As expected of a book-to-movie adaptation, it deviates from the book’s story in some areas, but even those unfamiliar with the book trilogy will be able to understand and follow the story. In fact, halfway through the film, we just stopped comparing the movie to the book, and kept our eyes glued to the screen and enjoyed the ride.

One crucial change, however, is the movie’s end. We are curious on how this slight alteration will play out, especially since Ball has announced in a Sept. 5 interview with BuzzFeed that a sequel is currently in the works.

The film’s depiction of the maze monsters, Grievers, is terrific—horrifying, yes—but truly amazing. They are realistic, gross and even more frightening than how they were described in the book.

The cast is also one of  the film’s plus factors. One such notable performance is Will Poulter’s Gally, the stickler-for-rules jerk who butts heads with Thomas.

Gally is just perfect, as if Poulter dove into the book and then emerged from the very pages of the novel as the Glade’s resident bully. Poulter’s (“We’re the Millers,” “The Chronicles of Narnia: The Voyage of the Dawn Treader”) portrayal has just the right amount of smugness and malice, and that hint of vulnerability.

The coolest of the bunch is Minho (Ki Hong Lee), the head Runner, a Glader whose job is to run around the maze, map its twists and turns and try to find the exit. Minho charms the audience with his loyalty, deadpan humor and witty one-liners.

Second-in-command Newt (Thomas Brodie-Sangster, “Game of Thrones,” “Phineas & Ferb”) and youngest Glader Chuck (Blake Cooper) form the heart of the movie. Though their scenes are quite few and far between, their impact is felt all throughout the film—particularly rosy-cheeked Cooper.

Some issues that mar film, which are admittedly quite substantial even if few, are Thomas’ inadequate character development and the demotion of the role of Teresa, the only female Glader in the story.

The lack in exploring the main character’s development is a problem quite a few book-to-film adaptations haven’t quite resolved yet, particularly with “The Maze Runner.” How, indeed, can you make into a movie a book where part of the story happens in the protagonist’s mind? (Case in point: “Ender’s Game”)

Readers of the novel were given a window to Thomas’ innermost thoughts and feelings, insecurities, fears, secrets and the motivations for his unquenchable thirst for the truth. And this “window” becomes no more than a peephole in the film.

It’s a good thing that O’Brien, popularly known as Stiles in the MTV series “Teen Wolf,” finds the perfect balance in portraying Thomas’ confusion and vulnerability as well as his determination and bravery.

Kaya Scodelario, on the other hand—more popularly known as Effy Stonem in the hit UK television show “Skins”—is woefully underused as Teresa, the only girl and the last teenager sent to the Glade.

Teresa plays a more vital role in the story than merely Thomas’ possible love interest. She is smart, vibrant and brave. Her presence in the Glade is supposed to be crucial to the survival of the Gladers. And judging from Scodelario’s past performances, she definitely has the capability to play the complex Teresa.

“The Maze Runner” has an overpowering amount of testosterone already—what with 40 teenage boys who are prone to violent outbursts all stuck in the Glade? We need Teresa’s girl power to balance that out.

But we are still hopeful for better character development and portrayals, specifically for Thomas and Teresa. There are, after all, two more books in the series which, we gathered from fans, are even more exhilarating than the first.

One thing for sure, with the coming sequel, “The Maze Runner” are in for another adrenaline rush.