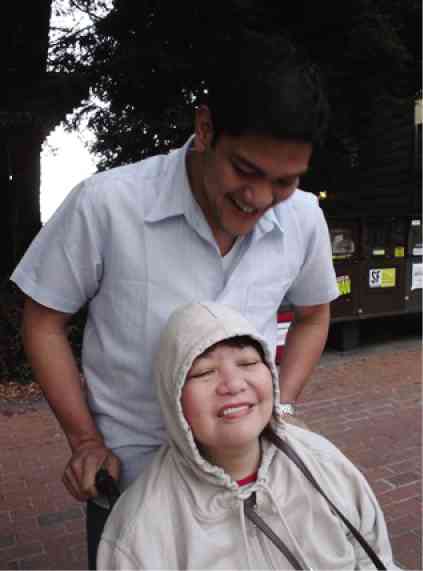 MITZIE CRUZ goofing around with son Mico in San Franciso (2005)

Thanks to the ALS Ice Bucket Challenge that has been trending in the US and has made its way to Manila, the ALS Association (www.alsa.org) has already raised over $100 million.

The timing of this social media phenomenon could not have been better because it is raising public awareness of a cruel disease that slowly and silently kills its victims.

Amyotrophic Lateral Sclerosis (ALS) is a neurodegenerative condition that has been largely invisible to the world, but not to me and my family. ALS claimed my mother’s life two months ago.  She was only 64 and had battled ALS for 17 years.

My mother was Matea Angela Santiago Cruz, Mitzie to family and friends. To my brother Mico and me, she was simply Mama, the steady, radiant sunshine in our lives.

She not only filled our growing-up years with fun memories, but also made sure we were raised to be resilient and responsible adults sustained by a deep trust in God.

For most of her life Mama radiated energy that was contagious to those around her. She was intelligent, organized and highly efficient; she knew the perfect solution to every need.
An avid reader, shopper, driver and traveler, she illumined our lives with her insights, jokes and stories. She personified faith, determination and strength, especially when it came to life’s trials.

In the mid-1990s, Mama started to limp and gradually lost her balance. At that time, not even the best doctors in Manila could determine exactly what her illness was.

But the fighter in her was not discouraged. In 1997 she flew to San Francisco with my very encouraging Lola Lolita to seek some clarity. My cousin Jim, who is like Mama’s eldest son, lived there, and he did some research that eventually gave Mama the answers she was looking for.

They found Dr. Richard K. Olney, a neurologist and pioneer in medical research on ALS at University of California-San Francisco (UCSF) Hospital.

Mama’s condition finally started to make sense. Mico and I immediately read Mitch Albom’s “Tuesdays with Morrie,” which was published that same year, and it became our bible of sorts.

From 1998 to 2007, we made a yearly pilgrimage to the UCSF ALS Center on Parnassus Street in San Francisco. Mama became known to the medical staff as their “patient from the Philippines” because she would always bring them different kinds of pasalubong.

Mama was subjected to a battery of tests by the Center’s team of experts. Each visit was longer than the previous one because of the progression of her disease.

From the center, Kuya Jim would take us to Target, Macy’s and Nordstrom, Mama’s favorite shopping places. In sickness and in health, Mama just loved to shop!

Those outings had the same effect on her that a big red lollipop would have on a child after a visit to the doctor. They were also the most compelling ways to take Mama’s mind off the worsening prognosis she received on every visit.

In his homily at the funeral Mass for Mama, Fr. Arnel Aquino, SJ, offered a vividly poignant description of what ALS is like.

“ALS is a freedom thief, magnanakaw ng kalayaan. It steals a person’s freedom by progressively turning off the electricity in the muscles and nerves, like a crawling blackout in a city,” he said.

In Mama’s case, the blackout began in her legs. First she lost her balance, then her mobility. A few years later, she became totally wheelchair-dependent.
The blackout started crawling up to her arms and hands, robbing her of the ability to write, type and send text messages (a great of joy of hers).

By this time, she had also started to use a Bipap (Bilevel Positive Airway Pressure) machine to help her breathe. The blackout started to creep into her diaphragm muscles.
Without her nurse’s help, she could no longer shift from side to side while sleeping.

Ten years in, Mama lost her ability to swallow food and fluids, and so a feeding tube was inserted in her stomach. A year later, the blackout worsened even more: She was rushed to the hospital because of acute respiratory failure.

Determined to live longer in hopes of seeing us settle down, Mama opted for a tracheostomy that would mean full dependence on a respirator.

This also meant staying put at home. For Mama the lakwatsera, nothing could be worse: living a life not only imprisoned within her own body, but even within the walls of her  own home.

But Mama was fiercely determined to see her illness through and was grateful for the bonus years it afforded her. As her disease continued to worsen, something positive was taking place—her interior freedom was growing exponentially. Habang palala ang sakit niya, lalong lumalim at lumawak ang kalayaan niya.

Even as she lost balance in her legs and could not grasp and hold anything with her hands, and her limbs could no longer move,  Mama fully accepted her condition and whatever obstacle ALS threw her way.

ALS may have paralyzed her body, but it never crippled her freedom, never diminished her will. It did not stop her from living her life.

Her motto, which she would always say (or spell) with feeling: “I may be sick, but I am not sick inside.”

Mama’s mind remained vibrant and sharp; she greeted people on their birthdays; set alarms on her cell phone for novenas for those asking her for prayers; requested Auntie Nini to update her on their high school barkada; thanked Papa for her monthly supply of Glucerna; asked Mang Roni, her driver, to buy merienda for her physical therapists, and lovebirds for her grandchildren, Erin and Matty.

As her speech deteriorated, she learned new and more efficient ways to communicate. She memorized the alphabet board that she used to spell out words. When she could no longer blink successively, she devised a different way of responding: looking up meant “yes” and closing her eyes meant “no.”

A simple word or phrase took longer and longer to spell as she grew weaker, but that did not stop her from sending text messages that read more like lengthy e-mails. On her alphabet board were numbers 1-10, each number corresponding to four alphabet letters. It looked like this:

Let’s try the word “turn,” which Mama could no longer do on her own in bed. She would look to the right side of the board and nurse Vivian would say 5. Then, before she heard 6, Mama

Imagine how many hours it took them to fill out forms, spell out lists, write greeting-card notes and send text messages.

Yes, Mama insisted and persisted because she wanted to keep communicating with those dear to her. In her last few months, she discovered Facebook and the joy of having an iPad, which became another set of windows for her to see and reach the world she sorely missed.

The irony of ALS is that it kills the body, limb by limb, organ by organ, but it never kills the spirit.

In Mama’s case, it may have claimed her life, but it never extinguished her light. That light continues to shine on us and always will.