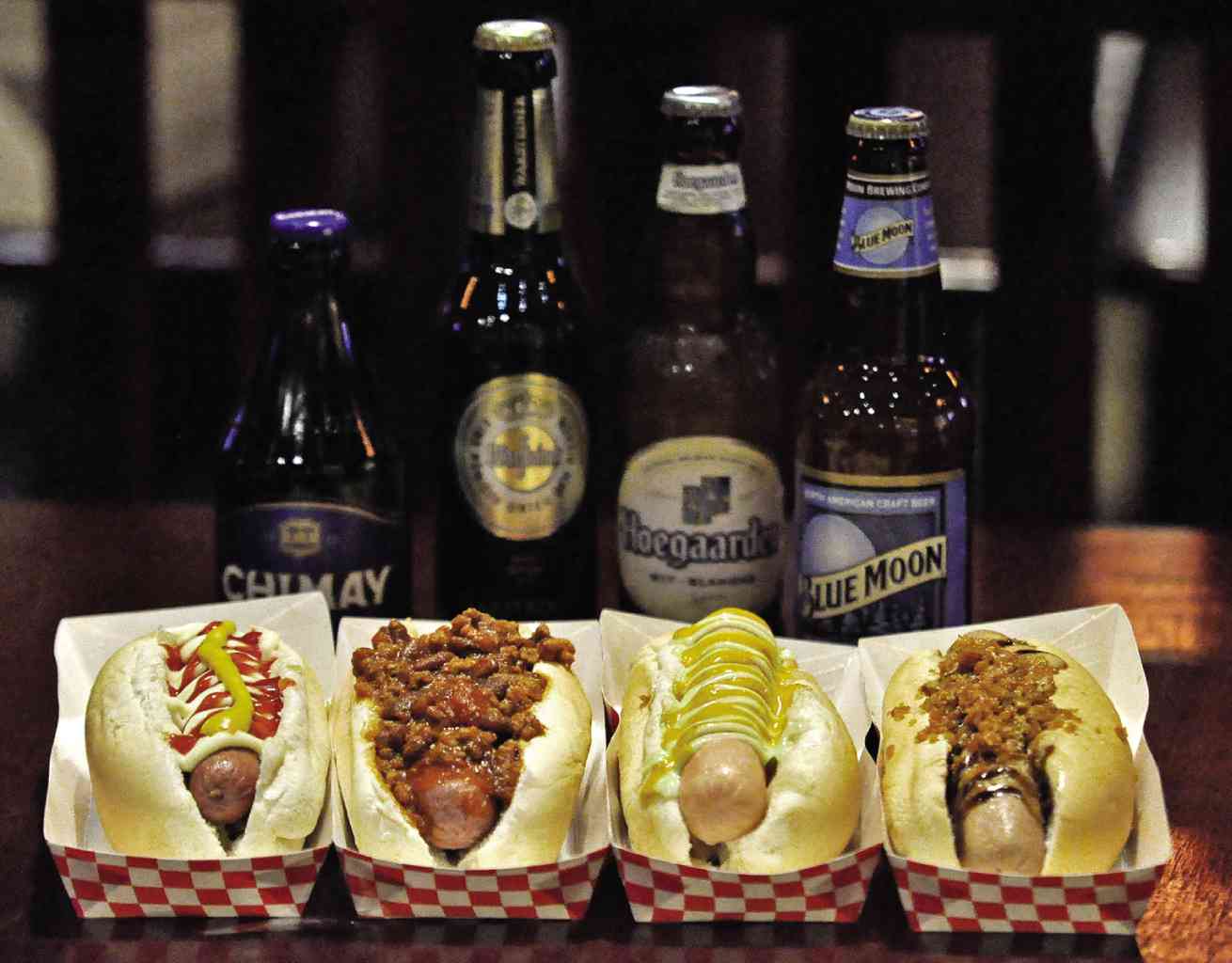 American-style hot dogs in Filipino flavors–and inside a casino

Franks Craft Beers offers hot dogs fit for high-rollers, and imported cold beer to pair with them. But, for now, the place is for adults only. That’s because the pub—named “Franks” after frankfurters—is located inside the casino of Resorts World Manila, and one has to be at least 21 to enjoy its American-style hot dogs done in Filipino flavors.

Scott Sibley, Resorts World Manila chief hotel operations officer, came up with the idea of putting up a hot-dog-and-beer place. He collaborated with chef Benedicto “Ben” Bernardo to offer something new to diners who frequent burger joints. They wanted a hot dog bar with a simple menu, but with original items, and a comfy, diner vibe.

“There are a lot of hamburger places that offer burgers too difficult to eat,” said Bernardo. “Here, we have unique hot dogs and drinks.”

topped with two sauces: white adobo béchamel sauce and dark soy-based adobo sauce. It is sprinkled with fried garlic for a bit of crunch.

The Chicken Inasal hot dog is chicken hot dog with a mild smoked flavor. It is topped with wasabi-mayo and inasal sauce, pickles and onions.

Braised beef hot dog is heavier with 100-percent beef, while the Classic Franks hot dog is made of pork.

According to Bernardo, they came up with different kinds of meat to cater to diners’ varying preferences. The hot dogs are from a supplier in Bulacan. They are boiled and served a couple of minutes after having been ordered.

All can be had with cheese, caramelized onions, guacamole, sour cream, jalapeño and chili. Bernardo said he plans to put up a “chili wall” with 80 kinds of hot sauces from around the world.

The classic hot dog sandwich is sold at P128, while flavored hot dogs are at P148. A combo of hot dog, choice of side and draft beer is at P328. Among the sides are french fries, which are poached then fried till crunchy, plus potato wedges, onion rings and chili con carne.

The hot dog on stick, Franks’ version of the corndog, is classic hot dog battered and fried till brown.

Pair the hot dogs with German beer on tap such as Paulaner Dunkel and Paulaner Hefe-Weizen. Beer sold by the bottle include Chimay Blue, Hoegaarden, Stella Artois, Blue Moon and

There are sober choices, too, such as soda, and Arizona Iced Tea in Piña Colada, Green Tea, Peach, Lemon and Fruit Punch flavors.

Franks Craft Beers seats 60. It has dark wood tables and chairs, dim lights, brick walls and an open counter where one can personalize his or her hot dog orders. On the walls are photos of iconic Franks, among them musicians Frank Sinatra and Frank Zappa, and football player Frank Lampard.

The place offers a sports-bar feel minus the loud sound and emotional fans. There are TV screens showing classic games, but they’re intentionally on mute to give diners a chance to

Franks hot dogs have become a favorite among casino- and mall-goers, and diners bring the hot dogs home to kids and teens.

Over dessert of Banana Fritters with whipped cream and dark-chocolate sauce, Polat Pamuk, Resorts World Manila food and beverage manager, said Franks may soon be available outside the casino, so that younger diners may enjoy them, too.