How much do we know about martial law? You’ll be surprised | Inquirer Lifestyle ❮ ❯ 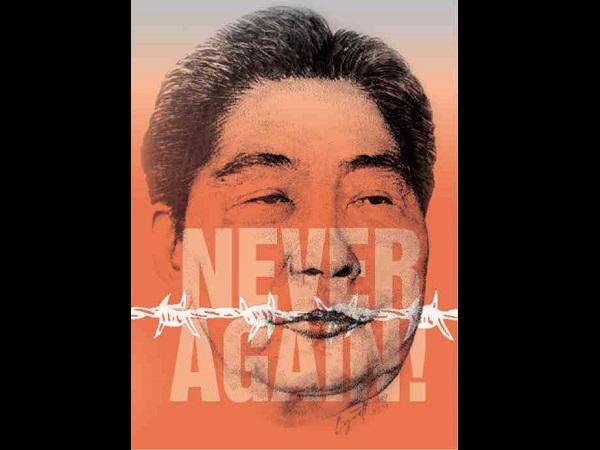 ‘PORTRAIT OF PUTRIDITY, DECAY’ Portrait of the exiled Ferdinand Marcos as he faced his death in Hawaii by lupus in 1989. As a martial law victim puts it: “its architect is a portrait of putridity and decay.” Pointillist drawing by Lynett A Villariba

How much do we know about martial law? You’ll be surprised

On Sept. 23, 1972, Filipinos learned about the declaration of martial law by President Ferdinand Marcos on TV and the radio. Preceded by an unexpected nationwide power failure, the news angered, shocked and scared many.

But there wasn’t much they could do about it; early that day, the military had started arresting people it considered enemies of the state.

Strict midnight curfews were imposed. There was no freedom of speech. Any word against the government could endanger one’s life. Graffiti-sullied walls were painted stark white, erasing any expression of discord. And basically everything you did was being watched.

“Martial law was a well-planned scenario by the Marcos regime as the term of President Marcos was ending. This was planned so that he could stay in power. As admitted by then Senator Juan Ponce Enrile, everything was scripted so that there would be basis for the proclamation. The law was already signed three days before it was even announced,” says Emmanuel Leviste, a 58-year-old government employee.

“Hence, martial law was another zarzuela in Philippine history with the Marcoses in the lead roles. Perhaps looking back at those days now, they were truly the darkest years in the history of the Philippines,” Leviste concludes.

Though Martial Law made the ordinary Pinoy suffer, Maria Louise Pante, a 28-year-old MA History student, believes that it also brought out the good in Filipinos. “Some politicians showed that excellence in leadership and courage could be used to fight for what is right and what is due. [Martial law] also ignited that fire among the youth to be aware and to be part in moving this country toward political progress,” she says.

Forty-two years have passed; the Filipino people have since regained their freedom. Martial law might have initially cowed them into submission, but the abuses of the Marcos dictatorship led to the Edsa Revolution.

Today, 42 years later, young Filipinos are learning about martial law. Our generation wasn’t even born at that time.

I asked teens and tweens about their understanding and views of those years.

“I have many classmates who are fans of Marcos and all the improvements he made in the Philippines. While I don’t discount any of his achievements, I think the reason my generation praises him is because we’ve never experienced martial law ourselves. We don’t know the feeling of having our rights infringed on, of having to censor every word that comes out of our mouths. As a person with background in journalism, I think freedom of speech is very important. I’m grateful I’ve never been deprived of it, and I hope I never will.” —Erika Hao, 17, Immaculate Conception Academy

“Martial law brought peace and order to our country. That was one of its advantages. But if it had been extended further, people would rebel and chaos would reign. I’m not for martial law, because without freedom, there won’t be order and discipline.”

“I think martial law is well-suited for Filipinos because we can see how undisciplined and abusive Filipinos are these days.” —Francis B. Natividad, 18, University of the Philippines Diliman

“I cannot say for sure what and how martial law was, since I wasn’t born yet at the time, although I have learned in school that it was a very irresponsible way of using power. Martial law was supposed to exercise control over and discipline among the people. Yes, that happened, but as time marched on, the military started taking advantage of the power handed to them. Martial law could’ve resulted in something good for our country, if it hadn’t been for the irresponsibility of the people who had the power.” —Steven Angelo Maristela, 18, University of Santo Tomas

“In my opinion, Martial Law was used by Marcos to rein in the opposition. It is usually cast in a bad light because people at the time lived in fear, where the slightest infraction was met with severe punishment. Although order was established, it was at the price of freedom. I don’t believe that martial law was or will be justifiable unless in times of war, because although its intentions were good, the execution was very susceptible to corruption because of the drastic power imbalance that it created.” —Ella

Thorpe, 18, University of the Philippines Diliman

“It’s necessary if things get out of hand—just as long as leaders use it mainly to pacify the chaos happening in the country. It shouldn’t always be seen in a bad light; though it teaches us that we should be very wary of the things we do, and not take little things for granted as martial law can strip us of rights and privileges.” —Daniel Solis, 17, De La Salle University

“Is martial law a repercussion of national crisis or a gateway to a full-on, drastic military dictatorship? The underlying question is: Will martial law be beneficial in helping the citizens of the country, state or province? If there’s one thing I know about power, it can be used and abused. There is never any real assurance that any country, state or province would end up in a better condition after martial law. So, why have it in the first place? Such power can be used for rapid rehabilitation and development. However, even the best of the best can’t handle martial law efficiently because they have to keep giving favors to some people, without whom their power has no meaning. Only a few geniuses can truly make the most of martial law and it should always be seen and taken as a tactical risk.” —Ralph David R. Lagos, 16, La Salle Greenhills

“I think it was one of the saddest periods in our history because a lot of people suffered and died. But the only good thing about it was how Filipinos fought back to regain their freedom.” —Maxine San Agustin, 17, iAcademy

“All I remember is that Marcos declared martial law because he was losing his grip on the people and things were getting out of hand. And I know people had curfews.” —Janna Lejano, 18

“What I know about martial law? It was a time of order and chaos. Although it disciplined the people, there was still violence and oppression.” —Rica Salomon, 22

“Curfews, suspension of civil rights and military justice served on civilians. Civilians defying martial law would be subjected to military tribunals. This was implemented by Ferdinand Marcos in 1972.” —Paolo Lacson, 18

“A time when a portion of the Filipino public suffered a massive, generational, cross-cultural, inter-class delusion that having a dictator for a head of state is actually a good thing. Also known as a long period where many civil, political, economic and social rights where badly, oftentimes fatally, abused.” —Reighben Labilles, 26

“I know enough that I have no right to be a Marcos apologist and to claim that the quality of life was much better then than it is now, unlike most of the online Marcos apologists (who are, oddly enough, mostly in their 20s).”