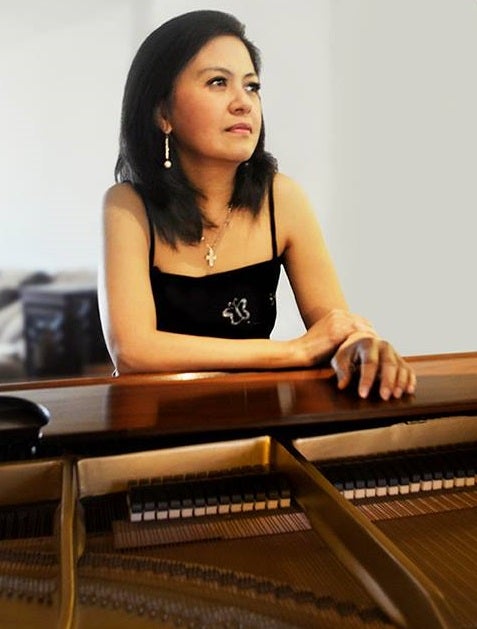 NEW YORK – More than two decades ago, Rowena Arrieta, the Philippines’ only “concert pianist to have learned Soviet music first hand from a Russian mentor in a Russian conservatory,” conquered New York with exceptional performance at the Lincoln Center for the Performing Arts.

In 1985, although it was her debut recital and her first at this huge stage, her performance was given critical acclaim. Arrieta was honored by the New York Times as having ‘fevered, demonic intensity and gentle, sublime introspection”. The Daily News called her a “combination of purity and fire”.

Despite having performed earlier in various cities of the former Soviet Union, in Europe (France, Spain, Germany and Italy), Australia, Hong Kong and the Philippines, she said her experience performing in New York then was unique, challenging and exciting.  New York is New York, she said.  New York City is the cultural capital of the U.S. and Lincoln Center brings an aura of great achievement for performers since it is “dedicated to the finest in the world of music and the arts.”

Today, after getting married and having been blessed with two children, the formidable pianist is back with a heart of passion to tickle the ivories for an encore performance on Saturday, Sept. 20.  This time at the Merkin Concert Hall at Kaufman Music Center, another important New York City landmark that hosts 70,000 concert goers a year.

In this concert, Arrieta will be playing a selection of pieces written by her favorite composers such as Francz Liszt, Robert Schumann, Sergei Rachamaninoff, Alexander Scriabin, Claude Debussy, Alexander Scriabin, George Gershwin, and also Nicanor Abelardo, a noted Filipino musician known for his Kundiman songs.

“I am excited to play a solo concert again in New York City,” Arrieta said. But with humility and gratefulness, she added:  “Whatever performance I will give, it is not going to be about me or my abilities, it is going to be about the One who gives us all the gifts and blessings, the One whose miracles, big or small, we sometimes fail to see.”

This concert is a project of the Philippine Pearl, LLC, as part of its efforts to promote Philippine talent.  Arrieta said it took “roughly a year of planning and this [concert] maybe the start of a series of concerts.”

The youngest of five siblings, it was Arrieta’s elder sister, who was teaching music that got her into playing piano. At age two, she started playing piano by ear.  Then at age four, she had learned how to read notes and by age five, she had written her first musical composition.  She remembers being dressed in uniform and was going to the Philippine Women’s University’s College of Music where her sister taught.  She progressed steadily under Leonila Celino, Reynaldo Reyes and Carmencita Arambulo who were her mentors.   But Arrieta said that it was Arambulo who really pushed her hard and took care of her. She won First Place in Piano in the 1976 National Competition for Young Artists in the Philippines, which was considered as her first recognition as a pianist. She was one of the first graduates of the Philippine High School of the Arts in 1978.

Also in the same year, she met American pianist Van Cliburn and the Minister of Culture of the former Soviet Union.  She said she was at crossroads at that time – undecided where she would pursue her studies.

“I asked Van Cliburn’s suggestion and he told me to go to Moscow,” Arrieta told this reporter.  Cliburn, at the age of 23, was the first American that won the first quadrennial International Tchaikovsky Piano Competition in Moscow at the height of the Cold War in 1958.

By the time she was 18, she became the first Filipino to win the Laureate title at the highly prestigious Tchaikovsky International Piano Competition in Moscow.  She was also recognized by the judges as “the youngest and most promising of 82 international piano contestants.”  She considers her winning this competition as her breakthrough in her career.

“This is one of the toughest, if not the toughest International Piano Competition in the world,” she said.  Arrieta was surprised herself and at the same time proud to have prevailed in the competition.

“Before this happened one would think that this historical moment would be impossibility, me being the youngest and coming from a small developing country,” she said.

“We have to be good stewards of all the gifts that God gives us and trust Him to be there for us at all times.  I was truly proud to be a Filipino when everybody made a big deal that a small country such as the Philippines was a participant for the very first time,” she continued as a matter of fact.

Determined to continue a path laid for her by her innate talent, she followed her dream to go to Moscow.  She went with her mother to a strange, far-away land much different from where she was born in Manila.  Her parents are from San Pablo, Laguna.

Studying in Moscow was not just about music though.  It also meant learning the culture, the arts and history and more importantly, the language.  As freshmen, she and her classmates from China and Vietnam had to learn the Russian language.  All of them had to be 100 percent fluent in the language.  In due time, as she became immersed in the country, she earned a degree in Russian Language Pedagogy that enabled her to teach the language.

Today, she still speaks the language and communicates well with anyone who came from the former Soviet Union.  Whenever she sometimes craves and shops for Russian food and groceries, she travels for hours from Long Island where she resides with her family to get to Staten Island to buy her provisions and also visit friends there.

Her favorite composers belong to the romantic era such as Liszt, Chopin, and Schumann including Russian composers Rachamarinoff, Tchaikovsky, and Scriabin.  Besides composers, she also loves pianists Vladimir Horowitz, Yevgeny Kissin and her late mentor Yevgeny Malinin.

Arrieta has not lost her passion for piano and for anything else, she wants to teach, encourage, develop and inspire the youth to excel in their chosen fields of endeavors.  Her children may not have followed the path she has taken but she said her children excel in their own rights.

She teaches piano to 70 students, which has kept her busy over the years including having two concerts in Manila.  Some of her students have already performed at the Carnegie Hall and also at the Kennedy Center in Washington, D.C. Others have earned a seat to compete in state and regional competitions.

She is happy with the outcome of her mentoring or her paying forward to students who are once like her pursuing her dream and using her God-given talent.

Both her children who were home-schooled are avid tennis players. Although Josheb has shifted his attention into New Media Computer Arts, her mother’s guidance and dream is still with him.  He recently won in an international Adobe competition participated by about 4,000 enthusiasts and developers.  “He may well be getting top honors, too,” she said.

As for her 14-year-old daughter Isabelle, she is into tennis.  A tennis champion in the making like American Serena Williams or Russian Maria Sharapova, she was asked.  “Maybe,” she quipped, “but it is up to her and I will respect her decision.”

She plans to launch a solo album after this concert.  “The recordings I have now now are the duo performances that I have done with my partner Raul Sunico,” Arrieta said.

He and another concert pianist, Rene Dalandan, were kind of buddies with Arrieta in the late 80s. While Sunico was finishing his doctoral studies at the New York University, Arrieta and Dalandan were classmates in furthering their professional studies at the Manhattan School of Music in the early ’90s.

Dalandan spoke highly of Arrieta and described her as “extremely committed to her studies”.  “She was very studious,” he said.  Both he and Arrieta performed in a benefit concert for the Metropolitan Opera House in 1989. Later, they had a four-piano concert which included Sunico, Arrieta, Dalandan and Corazon Kabayao, which wowed the audience.  “It was so exciting performing together,” Dalandan mused.

Dalandan is now a full-time music teacher at Pearl River Middle School in Orangeburg, New York for the past 10 years. He recently returned to the concert stage, performing three piano concerts with FilHarmonika Orchestra under Gerard Salonga in 2011, and then, recently a duo piano concert with Marites Fernandez at the CCP last August 23rd.

As far as compositions, Arrieta said she was the lyricist of the hit tune Ewan sang by the Apo Hiking Society and music by Louie Ocampo.  It won 2nd prize at the 1979 Metro Manila Song Festival.

“I am fortunate to have been trained both in Russia and the U.S. It influenced my artistic growth from both sides of the musical world,” she said towards the end of the interview.

Arrieta is on her way to an encore performance, which many of her fans, friends and family, have been waiting for years to happen and would love to see her perform again and again.