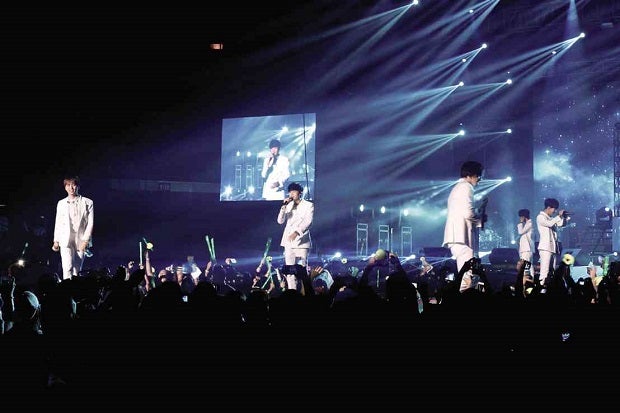 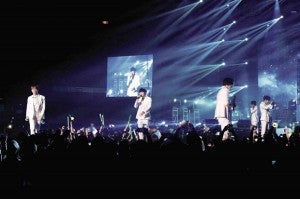 For most people, road trips are something one does with friends when one feels the need to go out of town for a quick getaway. But for the members of K-pop group B1A4, this particular “road trip” involves multiple pit stops across the globe and multitudes of screaming, swooning fans.

In a recent press conference at the Marco Polo Hotel in Pasig City, leader Jinyoung recounts the group’s first official encounter with its Filipino fans, who had made sure the boys got a warm welcome by chanting “B1A4!” as loudly as they could the moment the boys arrived at the airport.

Even as the presscon was ongoing, determined teens waited at the hotel lobby, hoping to catch a glimpse of their favorite member.

Having kicked off its world tour in Taiwan last August, the quirky quintet—Jinyoung, CNU, Baro, Sandeul and Gongchan—held its first show in Manila last Sept. 6, after which it headed to Australia and the United States.

Shortly after its official debut in 2011, B1A4 bagged several awards and held sold-out shows in South Korea and Japan despite its rookie status. And to think the members are just in their early 20s.

Coined from the members’ individual blood types (which is what Koreans believe personalities are based on), the name “B1A4” itself is one of the things that makes the group stand out from the plethora of idols currently dominating the K-pop scene. (Alternatively, the name also means “Be the One, All for One.”) As the sole member with blood type “B,” which is associated with creativity and passion, Baro jokingly admits that he has been around the others for so long that he might have also turned into a Type “A” personality, often described as introverted perfectionists.

The group has earned several nicknames, including “blood idols,” “countryside idols” (owing to the fact that all members hailed from different provinces), and “saessakdol” or “sprout idols,” which gave birth to B1A4’s hilarious signature “sprout dance” created by Sandeul and Baro to describe their “still growing up” phase.

Another interesting thing that sets them apart is that they’ve also been known to engage in philanthropic works and awareness campaigns.

The group has gained a huge following in the Philippines; if anything, the shrieking crowd that filled the Smart Araneta Coliseum last weekend was solid proof.

Wearing white suits and blinding smiles, the boys performed their hits “O.K.,” “Beautiful Target,” “Sleep Well, Good Night” and “Lonely” amid a neon-green sea of shrieking BANAs (the official nickname that the group’s fans use to call themselves).

As expected of a K-pop concert, it was a sleek, gorgeous production with giant LED screens, pop art visuals.

Of course, there’s also the requisite fanservice. Apart from gamely obliging the crowd with their famous “Bean Sprout Dance,” which is virtually impossible to watch with a straight face, the boys pulled one lucky female fan from the crowd and serenaded her onstage, to the delight and envy of the ladies in the audience.

As long as there are lovestruck tweens (and tweens at heart) everywhere, you can be sure that these “blood brothers” will receive a warm welcome wherever they go.