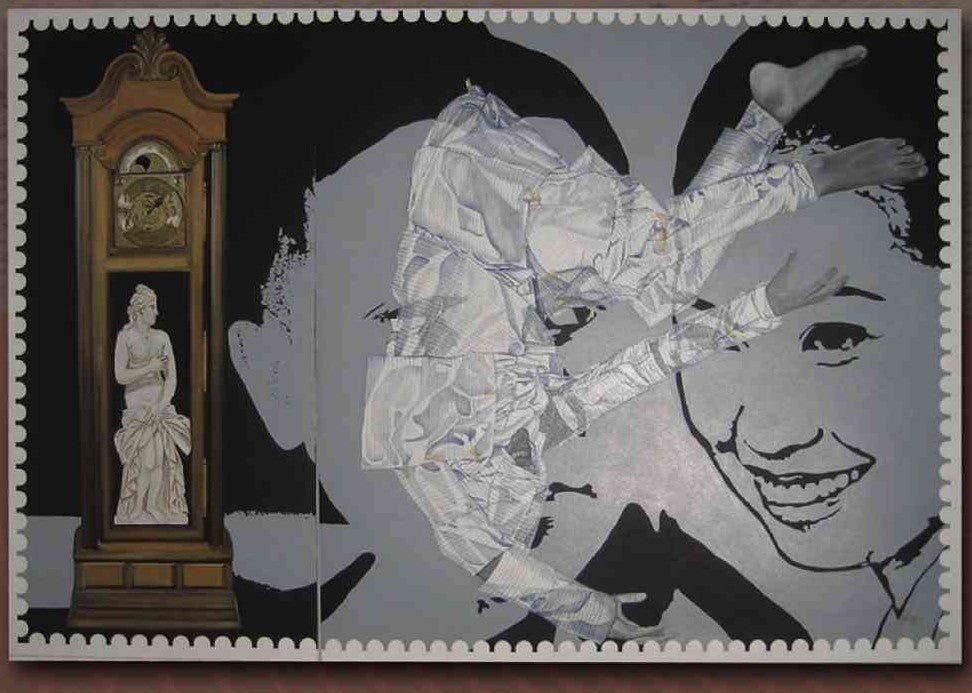 Space is corollary to painting, whether in flat even passages of color, or in depth with the illusion of perspective or recession.

Indeed, the experience of painting is basically one of space, as in murals, tapestries or easel paintings. But as for time? How will the artist approach the temporal dimension in painting?

Picasso developed his own variation in capturing time in simultaneity where cubist segments of a movement are fused in a single image. Marcel Duchamp painted his unforgettable “Nude Descending a Staircase,” the star of the Armory show, which dissected the movement of going down the steps into its sections. Other artists experimented with serial movement in which an action was analyzed into its consecutive moments. The Futurists extensively experimented with temporal movement in living things.

Space and time, however, are not separate categories, and science has affirmed their relativity to each other, as they move conjointly and not separately.

Perhaps among the youngest Filipino artists who have experimented with time in painting are two recent Fine Arts graduates of the University of the Philippines, Malyn Bonayog and Josue Mangrobang Jr. Bonayog’s approach to time has to do with the retrieval of memory. For her, time is not an abstract entity but is a human experience involving recollections of kin, parents and loved ones, and even of oneself in the process of growing from child to adult.

On the first level, Bonayog works with photographs, mainly black and white and spreads them on a surface from left to right. These are photographs of growing children, babes in the arms of their mothers. Often, the artist herself is in the photograph as a child.

Now, photographs are valued as repositories of memory. The lapse of time transforms them into personal souvenirs.

But Bonayog does not stop on the level of photographs. For a number of years now, she has developed a device of linear rhythms which are applied all over the photographic prints. These rhythmic lines are very even, jointly convex or concave, as they create a veritable optical illusion on the work. The swirling lines obviate the static and introduce dynamism in the image, and with it time measured in seconds and minutes.

Often the movement is sideways, but sometimes the lines coming from both directions, seem to mold an image, such as a child’s face, like a swelling rounded fruit, suggesting rapid organic growth. One may sense Freudian undertones in the artist’s desire to regain the experience of infancy and childhood.

Bonayog also plays on multimedia and experimental forms. In a work done for a joint show in the Art Center in SM Megamall, she applied her technique to an old photographic print of the Walled City, mural-size, which became dynamic with the swirling lines. She likewise added secondary contemporary prints of people of other times as well as various conveyances and juxtaposed them to enhance the play on time.

The other artist, Josue Mangobang Jr., has a different approach to time in the visual arts. He borrows from archeology and is fascinated with the strata that are excavated deep into the earth. Instead of connecting surfaces, Mangrobang first covers his subject with material, most often layers of paper, and begins the process of peeling the material little by little until the core is laid bare.

To begin his work, Mangrobang usually asks his subjects or models if they do not mind being covered with sheets of paper. These subjects are three-dimensional figures converted into two-dimensional forms by the camera and then juxtaposed with various photographs and portraits, black-and-white or colored.

However, they are not just brought together in a simple way: The original photographs may be in upright position, but the figures covered in white paper may be reversed, with the figures themselves, in their costumes, for instance, suggesting different periods of time.

The dynamism of the image is achieved by the artist in the positioning of the photographs and figures in relation to each other. Structurally, they may form two poles in the limbs and extremities and an axis in the middle of the figures. His composition thus involves swinging them on the surface of the picture plane in a way that the figures are organically related.

Like Bonayog, Mangrobang also favors children as subjects and is interested in showing growth in one individual or in a group with a common background in general. In both, there is a sense of deep sympathy and caring for growing children. In the images of both artists there is a sense of pathos in children finding their own individuality under the difficult conditions of our time.