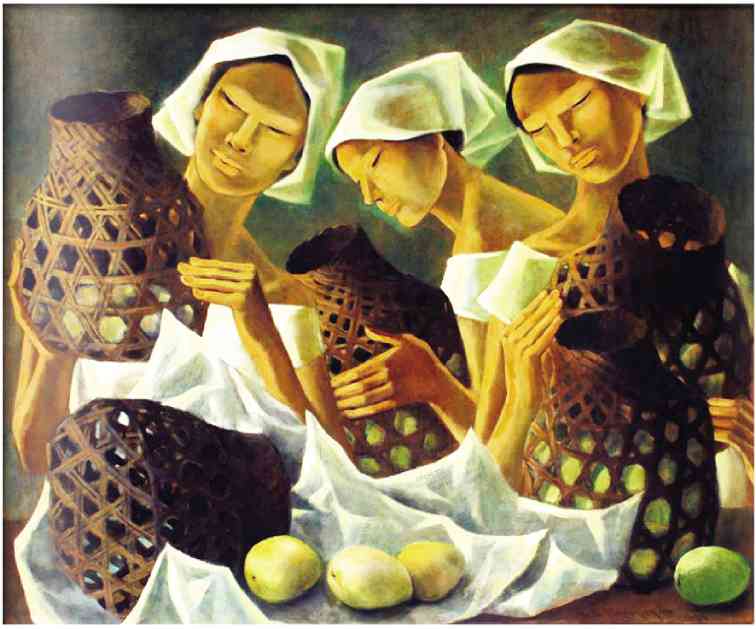 “Women with Baskets and Mangoes,” by Anita Magsaysay-Ho

Ronald Ventura’s 2001 mixed-media “Crack in the Hull” fetched the biggest bid at P25.7 million, which made it the highest ever paid for a painting at an auction in the Philippines. Its starting price was P2 million.

But the auction’s central piece, Anita Magsaysay-Ho’s 1980 oil-on-canvas, “Women with Baskets and Mangoes,” which graced the cover of the auction catalogue, fetched nearly the same price as the Ventura work.

With a starting bid of P2.2 million, the work by the only woman from the original Thirteen Moderns list of National Artist Victorio Edades, was sold for P24.5 million, setting a world record for a Magsaysay-Ho sold at an auction.

Another best-selling piece is Juvenal Sansó’s “Family Portrait” from 1956, which was sold for P7 million, beating Leon’s former record of P2.5 million for his 1955 oil-on-canvas “Mask and Faces” in last year’s auction.

An 1886 oil-on-canvas piece by Felix Resurreccion Hidalgo, “Claire de Lune,” was sold at P5.3 million. It was auctioned off starting at P1.4 million.

Setting another world record for a Mauro Malang Santos work was his “Mga Kendi,” from the collection of Angel and Carmen Guerrero Nakpil, which was declared sold at P2.6 million.

Oscar Zalameda’s oil-on-canvas “Women Vendors,” one of six works by the late artist in the auction, was sold for P1.4 million.

Amorsolo’s 1928 oil-on-canvas “Pilgrims on Sunset,” one of his three paintings in the auction, was sold for P5.8 million.

BenCab’s “Sabel in San Andres Bukid,” part of his first solo exhibition in 1966, was sold for 4.6 million. He has two other works in the auction, namely, “Crucifixion” and “Couple.”

Navarro had four works in the auction, including his 1982 oil-on-canvas “My Kind of Cross,” which was sold for P1.4 million. Its starting price was P240,000.

Blanco published in Manila the first edition of “Flora de Filipinas” in 1837.” Based on the system of Linneaus, it described and classified 1,200 plants and gave the vernacular names of each.

The Florendo Chest of Drawers set a record for a chest of drawers when it was sold for P4.9 million.

According to social historian Martin Imperial Tinio, the chest, made entirely of narra, stands on turned urn-shaped feet that support a base with an elaborately shaped skirt that is outlined with lanite line-inlay. Colonnettes flank the four large drawers atop each other and the pair of smaller drawers above them.

The Florendo family is one of the first families of Vigan and owns one of the largest “bahay-na-bato” there.

Meanwhile, the Lazatin-Paras Cabinet, with the starting price of P800,000, was sold for a staggering P2.8 million.

Also made of narra, the “aparador” has two drawers surmounted by a pair of doors that open to reveal four shelves with both doors bearing turned kamagong drawer pulls. Another unusual feature are the vase-shaped turnings flanking the drawers, said Tinio.

The Lazatin family, considered one of the first five families of Pampanga, is known for large landholdings and luxurious lifestyle.