Fury over the ‘Furies’ | Inquirer Lifestyle 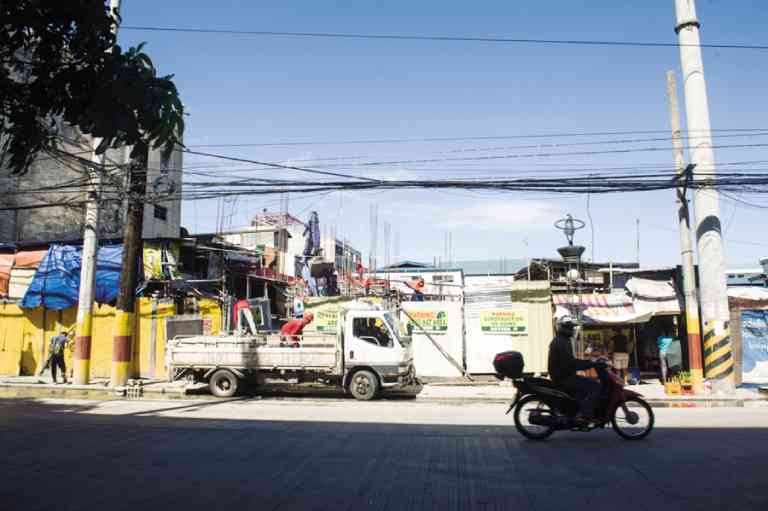 Fury over the ‘Furies’

The pre-war Juan Arellano-designed Art Deco-streamline old Meralco building on San Marcelino Street in Manila’s Ermita district is now just an empty lot devoid of any historical and architectural significance after it was completely demolished to give way to two commercial projects.

The demolition took place despite protest from the heritage sector and in the face of Republic Act 10066, or the National Cultural Heritage Act of 2009, which makes “structures dating at least 50 years old” as “Important Cultural Properties.”

The building used to be the headquarters of the Manila Electric Railroad and Light Company (Meralco), a company which originally provided Manila and its suburbs electricity and an electric railway system.

The building was razed to the ground last year.

Construction is now going on in the site for a McDonald’s joint and a condominium.

In 2012, the property had been sold to Wilson Cham, who’s now putting up the fast-food joint, and Major Holdings Inc., the condominium developer.

Heritage advocates had been quick to react in 2012, especially after a demolition permit was issued by the City of Manila. They suggested adaptive reuse of the building instead.

The permit was suspended by former city building official Melvin Balagot due to pressure from the heritage sector. Another permit was issued in June 2013, but the destruction was temporarily halted by the then newly-elected Mayor Joseph Estrada, especially after the Embassy of Italy protested since the bas-relief on the façade of the Arellano building had been made by the famous Italian expatriate sculptor Francesco Riccardo Monti.

But later in 2013, the Monti sculpture was taken down.

Due to its alleged bad state, old Meralco’s most prominent feature, the concrete high relief titled “Furies,” by Monti, which was located on Cham’s side of the development, was casted last year.

But, a replica was made of the demolished sculpture, according to architect Wilkie Delumen, chief of the Historic Preservation Division of the National Historical Commission of the Philippines (NHCP).

“Furies” depicts the deities of vengeance in Greek mythology.

Delumen said the relief’s exposure to elements plus a previous incident of fire had contributed to its deterioration. He said a copy of the work was later mounted on a wall of one of the buildings of the nearby Adamson University.

It is not clear though on why adaptive reuse was not done on the side of the building with the “Furies” as suggested by heritage conservationists, and why only remnants of the original sculpture are left.

Aside from Monti’s relief, other features of the building include the stylized-eye motif on its canopy, three statuettes on the façade, and the parapet grill design on top of the latter.

The stylized-eye motif was demolished together with the structure while the fate of the other two features was unknown.

Silvana Ancellotti-Diaz of Galleria Duemila, who made a study on Monti and his works, assailed national agencies for not doing their work in protecting and preserving the country’s historical and cultural heritage sites.

“They are ignorant of history like our NHCP [which] does not have the strength nor the will to implement the law. (The same goes for) the National Commission for Culture and the Arts (NCCA). They do not uphold the law,” said Diaz, who used to chair the National Committee on Art Galleries of the NCCA.

Diaz added that Manila and local government units should not have the power to decide the fate of historical sites, buildings and monuments for “like the NHCP, they [may] know history but they do not really value monuments and heritage.”

National agencies and local governments are infected with a “terrible cultural ignorance,” said Diaz, an Italian native married to a Filipino artist.

“It really breaks my heart to see beautiful creations of great artists and architects destroyed by ignorant, greedy people with no historical, cultural [consciousness] in government positions,” Diaz added.

Diaz researched on Monti, her countryman who came to the Philippines in the 1920s and became a celebrated sculptor tor with several high-profile commissions, especially with Arellano, but whose life was cut short by a road accident in the 1950s. Her study contributed to the publication of the 2003 book on Monti, “L’orto dei marmi: Francesco Riccardo Monti scultore (1888-1958).” It was written by Monti’s granddaughter Anna Filippicci Bonetti.

The book’s title translates to “The Marble Orchard: Francesco Riccardo Monti sculptor (1888-1958). It was published in Cremona, Monti’s hometown in Italy.

Diaz was also part of the team which organized an exhibition on Monti in 2005 at the University of Santo Tomas (UST), where Monti had taught and for which he created the huge classic sculptures atop the massive UST Main Building, declared a National Cultural Treasure by the National Museum.

The Heritage Conservation Society slammed the demolition of the Meralco building and the Monti sculpture.

The Old Meralco building is just one of many collaborations done by Arellano and Monti.

Monti met Arellano in New York possibly in 1930 when the famed architect was on training for the construction of the Metropolitan Museum of Manila.

Monti taught at the UST school of Fine Arts where he originated and developed the sculpture program. His students included Tin Pan Lay and Virginia Ty-Navarro.

“Monti loved the Philippines and he requested to be buried here,” said Diaz.