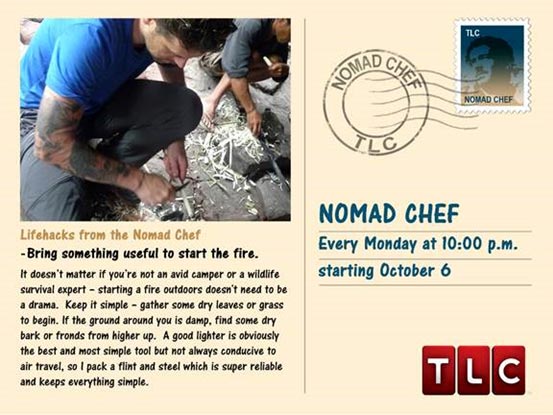 MANILA, Philippines – Join chef and adventurer Jock Zonfrillo on an epic culinary adventure to some of the world’s most remote communities in TLC’s all-new 10-part series NOMAD CHEF premiering every Monday at 10:00 p.m., starting October 6. Encores every Tuesday at 4:00 p.m. and Saturday at 8:00 p.m.

In NOMAD CHEF, Australia-based chef Jock Zonfrillo hunts, harvests and forages with indigenous people for the ingredients that go into their native dishes. In a journey full of enlightenment – and often danger – Jock explores oft-forgotten communities, learning to cook as the natives do. He seeks to uncover what these hidden culinary geniuses can teach about living sustainably, cooking creatively and eating the best way we can.

From hunting fruit bats in the South Pacific to harvesting goose barnacles in Spain, Jock faces no shortage of adventure along the way. In each episode, Jock returns home to his restaurant, Orana, where he creates a new menu inspired by his trip. Here, he attempts to successfully translate his experience in the tastes and flavors of the dishes he creates. But between the offerings of ant’s nest sorbet and lamb’s blood cake, will his creations simply leave a bad taste in his customers’ mouths?

Scottish by birth, 38-year-old Jock moved to Australia in 2000. He has been credited with putting Adelaide, his home town, back on the map for destination diners with Orana, a new restaurant he opened in late 2013, inspired by his obsession with native wild ingredients, his respect for country and culture and his love for foraging, diving and hunting.