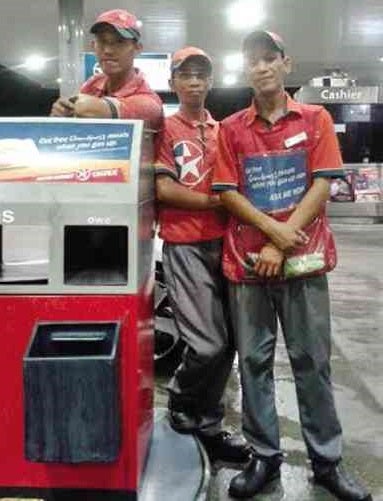 While I was preoccupied by so many things and the South Luzon Expressway (SLEx) was almost zero visibility because of the typhoon, I forgot that I had to make a pitstop to get cash from an ATM at a gas station just before my exit at Southwoods.

That’s after making a mental note that I had to do it since I had only P90 on me and I need P62 more to pay the toll fee. Rattled, I decided to go to the next and last gas station southbound, which was two exits away from where I was, only to find out from the gasoline boys, after briefly telling them about my problem, that no ATM machines were available there.

So I parked the car as panic was rapidly setting in and tried to contact my husband for SOS. At that point, one of the gasoline boys came up to me. Upon rolling the window down, I saw that he was handing over a few P20 bills and said that he and the others chipped in in order to help me and that they were hoping that the money amounting to a hundred is enough for me to take the next exit and look for an ATM machine.

I was so moved by their kindness, knowing that the money could’ve easily been a big portion of their very limited allowance for the night.

Tearing up, I told him that I will get cash and bring their money back right away. To which he responded with, “Hindi ma’am, tulong na po namin ’yan sa inyo.”

I didn’t know what else to say. I felt like “thank you” will never be enough for the kind of compassion they extended towards a stranger like me.

After finally being able to get money, I went back to Caltex as promised. The boys didn’t want the money back but I insisted. I tried to offer a little extra, too, but they said that they helped me without expecting anything in return.

I was simply floored at how amazing these people are!

Thank you again, Shaun, Joel, Orly and Rendel! All of you are living testaments that there is, indeed, hope for humankind. There should be more people like you! I can never thank you enough. Ever.