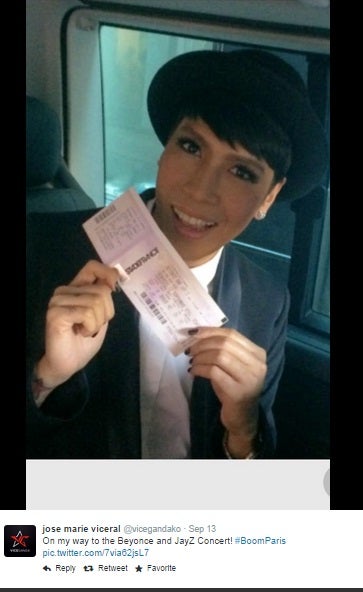 The rise in “selfies” seems to have been massively fuelled by celebrities who jumped into the bandwagon.

It has become the platform for most celebrities in their everyday life to let their fans be updated.

It’s like saying “Look where I am” and “Look what I am doing.”

TV-host and actor Vice Ganda, one of the top Filipino celebrities with over four million followers in Twitter, don’t take a break from work like we do. He goes on vacation in places most of us cannot afford.

In this photo, Vice took his selfie when he attended the concert of Beyonce and JayZ in Paris.

Aside from attending tapings, celebrities also have their advocacy campaign.

“I am okay.” That’s how actress Actress Kim Chiu said in a photo she took after she was named as the ambassadress of the advocacy “Win Against Asthma.”

Life goes on for actor Ferdinand “Vhong” Navarro after being embroiled in a controversy.

His selfie with actress Cacai Bautista has proven that he is not distracted with the controversies surrounding him.

Take it from TV-host Kim Atienza. No busy schedule should hinder celebrities from staying fit. Atienza is a triathlete.

In this photo, Atienza was seen in the photo with his wife together with couple Drew and Iya Arellano.

Artists need a break too. Actress and host Ruffa Gutierrez took this photo before she flew to Malaysia.

Other popular personalities who have jumped into the bandwagon include Pope Francis who had his first selfie with youths who visited the Vatican.

The star-studded selfie of Ellen Degeneres during the Oscars also went viral and crashed the Twitter world.

But fret not because there’s no need to be famous to take a selfie. Even ordinary Filipinos can join the bandwagon.

Makati, Pasig top list of ‘Selfiest Cities in the World’

Selfie tops twerk as Oxford’s word of the year