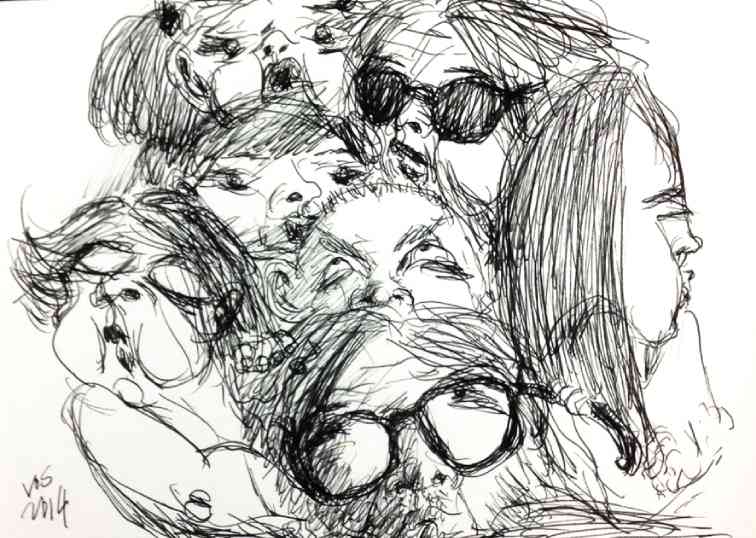 The non-art of doodling

I’ve justs been accused of being an artist, and I’m sore.

I’m sore because I’ve been precisely taking every precaution to not be mistaken for an artist, indeed to fall unmistakably short of being one—in case I happen to possess some of that fluky, late-arriving promise.

You’ll never know. Heard of the neurosurgeon in the story told by the music teacher and writer Fred Plotkin? A never-suspected pianistic potential broke free, genie-fashion, after he had been thrown out of a phone booth when lightning struck it; as he became accomplished at piano, he changed into another character and in the end left both wife and neurosurgery.

I don’t know, but is that all worth becoming someone else, even a Chopin, for?

I’m sure I’m not any near the prospect. I just don’t like being over-appraised for a simple, harmless pursuit I’ve set for myself in seniorhood. Who would like to pay the price of art for its crudest of relations—doodling?

Sure, I’m at it for maybe a total of an hour almost every day; but, while I may seem serious about it, it’s the kind of serious that requires no expert effort at all and little concentration. I don’t even require artistic implements; I use old-fashioned fountain pens, Parkers and Sheaffers. I also doodle directly on paper, without such preliminary penciling as true artists normally do. You see, I’ve been properly, inartistically careless.

Notwithstanding, some of my doodles happen to have found their way into these pages and apparently attracted such notice that I’m now unfairly labeled an artist and given the concomitant burden of responsibility. Worst of all, I’m robbed of my treasured comfort in mediocrity. I guess I have only myself to blame, for somehow giving the impression, if absolutely unintended, of overreaching.

An adoration of Thurber, Steig and Steinberg I won’t deny, but I’d be burying myself deeper if I made any claim to being influenced by them; that would be not only presumptuous but incredible. Their spare and tidy line drawings—mine are messy, more obvious doodles—may continue to suffer in the eyes of the uninitiated and unsuitably indoctrinated, but not even the artists’ self-depreciatory affirmations could take away from the art they have created.

Not exactly unhappily uncategorized, Saul Steinberg noted, “The art world doesn’t quite know where to place me.”

James Thurber was more categorical in his denial: “I’m not an artist. I’m a painstaking writer who doodles for relaxation.”

Thurber’s drawings, in fact, “rival his writings in their fame and lasting appeal,” according to John Updike, who certainly knew both his art (studied it at Harvard) and his letters, as does The New Yorker, the magazine for which Steinberg drew, as did William Steig, and Thurber both doodled and, like Updike, wrote.

The comedy integral to their art—“comic art that [is] art,” as Updike has put it—puts the likes of them in a category of their own—cartoonist—which I imagine they were only too relieved to inhabit, for actually, by general regard, it’s a poor subclass.

I do try to be funny myself with my doodles, but I also try to make sure that the attempt had some redeeming excuse in case it fell flat. I don’t dare let any doodle of mine stand alone; it’s there to accompany some piece of writing, my own or my wife’s; it’s a mere companion, not an illustration, another tricky territory in which I won’t be seen as an interloper.

The highest ambition I might aspire to is drawing. But again, those who draw do tend, however unwittingly or unwillingly, to signal some pretension to art, too. That would be avoided if only there were a word that names us people who just like to draw, period. But no vocabulary favors us. The general language itself has appropriated the word “drawer” for other things—in one sense, a box that slides from under a table, and in another, always in the plural, a piece of undergarment, and not just any piece of undergarment, but one “worn below the waist,” as specified by the Oxford Dictionary, apparently taking no chances against any misappropriation of both the word and the undergarment.

So, doodler I shall remain, which I don’t mind. I’m happy enough appreciated as such by my grandchildren, who surely dig doodle and won’t allow themselves—not just yet—to be taken for a ride to the esoteric realms of art.