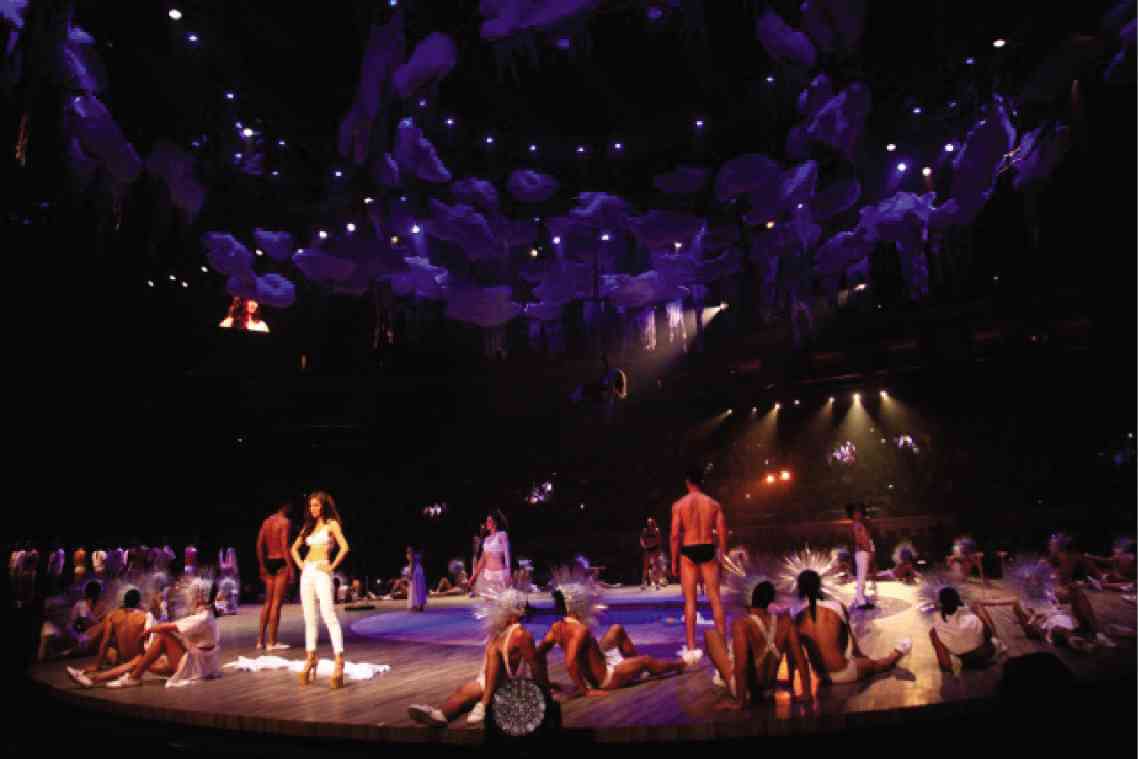 “THE NAKED Truth’s” lighting, set and stage work together to give the entire show a photogenic and social-media-worthy quality. PHOTOS BY CHITO VECINA

If you failed to see such hotties as actress Lovi Poe and New York-based Filipino-American model Paolo Roldan in “The Naked Truth,” blame it on Typhoon “Mario,” which struck Metro Manila Friday, Sept. 19.

Some of the country’s biggest stars remained the main attractions, but for the first time since Bench’s biennial body show debuted in 2001, nameless performers—dancers, contortionists and acrobats from the US and Canada—were able to hold their own before a massive audience.

As the typhoon battered Manila that Friday, Ben Chan, chair of Suyen Corp., which owns Bench, decided to postpone the much-awaited show to the next day, Saturday, capping weeks of anticipation, if not suspense, of “The Naked Truth.”

“Mario” or no “Mario,” the crowd would pack the SM Mall of Asia Arena.

“Naturally, there were rebooking and rescheduling issues, and that cost us,” said Chan. “Paolo, one of our star models, was scheduled to fly to the US that night. So he missed the Saturday show. Lovi wasn’t available because of filming commitments the next day. She had to skip the show, too.”

Chan had hired models from top New York-based modeling agencies like DNA and Wilhelmina and mixed them with local models and celebrities to give the show a more diverse and global appeal.

The typhoon compelled Chan and his team to reevaluate their priorities. Everyone’s safety, including that of the audience, took precedence over costs.

“We have done a lot of underwear shows,” he said. “This is the first time something like this happened. In show business, they say the show must go on. So, by 11 a.m. Friday, I said we were pushing through. But as the wind and rain got worse, I knew I had to postpone the show.”

Chan announced the show’s cancellation by 4 p.m. Such a difficult decision, he said, was made lighter to bear by the support of everyone, from the stars and models who had to rearrange their schedules—and extend their diet and fitness regimens by a day—to the Arena staff.

“They were very understanding,” said Chan of SM. “They allowed us to reschedule. Remember, I put up my first Bench branch at SM. I guess all these years of solid collaboration and friendship with them have paid off.”

Middle East-based Filipino designer Michael Cinco, who’s doing an eponymous line of black underwear for Bench Body, had his own segment some 30 minutes into the one-and-a-half-hour show.

Thanks to a team of foreign acrobats, contortionists and dancers, fashion took a backseat in favor of circus-like atmosphere.

To the crowd’s delight, performers from Montreal-based Seven Doights used all sorts of contraptions—ropes, seesaws, pulleys, parallel bars, ladders and giant rings—as they defied gravity and pushed the body’s flexibility to the limits.

Directors Robby Carmona and New York-based Canadian Gypsy Snider gave the show a multimedia feel by combining a dangling circular set that looked like puffs of white clouds, with several giant video walls on both ends of the ramp.

The constantly changing video walls cued in the audience to a new segment and the entry of stars.

A circular dipping pool at the center heightened the visual feast.

To help fans, especially those in the rafters, identify the stars, four strategically positioned jumbotrons near the Arena’s ceiling flashed the celebrity’s name underneath his/her moving visage.

Lead stylist Noel Manapat and his team, this time, ditched over-the-top headdresses and costumes in favor of more natural and uncluttered looks for such female stars as Marian Rivera, Kim Chiu, Shaina Magdayao and Carla Abellana.

Without those surreal headdresses, even the boys looked uncharacteristically normal but nonetheless hot.

With camera phones, shrieking fans were unable to contain themselves as Roque and company teased the crowd by tugging and lowering the waistbands of their black undies.

Some Bench mainstays took the challenge. A rather hefty Jake Cuenca, wearing nothing but a pair of jockstraps, dangled from a rope. He and a lean, denim-clad Paolo Avelino still managed to excite the crowd.

The show wasn’t devoid of editorial-worthy styling. This time, instead of the stars, the models wore the visually arresting headdresses.

Like in past editions, “The Naked Truth” was a barometer of a star’s popularity.

Based on the crowd’s rather tepid response to his appearance, the era of Coco Martin seemed already at an ebb. It was in stark contrast to the rousing reception the actor got from shrieking fans two years ago in “Bench Universe.”

In his place was the love team of fellow Kapamilya talents Daniel Padilla and Kathryn Bernardo, aka Kathniel, who generated one of the evening’s loudest cheers.

As in previous years, “The Naked Truth” became a proxy war of sorts between Kapuso and Kapamilya networks.

Not to be outdone, Kapuso unleashed the “love team” of Dennis Trillo and Tom Rodriguez to the delight of fans. The underwear-clad actors played gay lovers earlier this year in the hit teleserye “My Husband’s Lover.”

A disturbingly well-endowed Rodriguez (was he or wasn’t he wearing padding underneath those olive undies?) brought the house down by tugging at his underwear.

The roaring crowd’s evening was complete when Trillo emerged from backstage a few minutes later.

At one point, TV’s favorite “behs” (sweethearts) were set to lock lips until a pair of female dancers stopped them. In the end, to people’s initial shock, it was the women who ended up kissing each other!

First-time Bench endorser Marian Rivera, in hot-pink bra top and floor-sweeping layered skirt, was one of the evening’s most applauded and most photographed and Instagrammed stars.

Despite the stress, Chan was quite happy with the results. He was also pleased with the stage and the 360-degree view it offered. To him, it was like watching a bloodless, violence-free gladiator match in ancient Rome.

Chan also loved the “superb” lighting and the photogenic quality it gave images for social media. Everything fell into place, he said, “since we were working with the best in the world.”

“These are talents that previously worked on Olympic spectacles and the videos of such stars as Jay Z, Kanye West and Beyoncé,” he said. “I wanted to bring that kind of spectacle to the Philippines. I wanted Filipinos to experience the energy and excitement of a Bench show where creative collaboration with world-class talents has taken a front seat.”