‘And So It Goes’: A movie about second chances | Inquirer Lifestyle ❮ ❯ 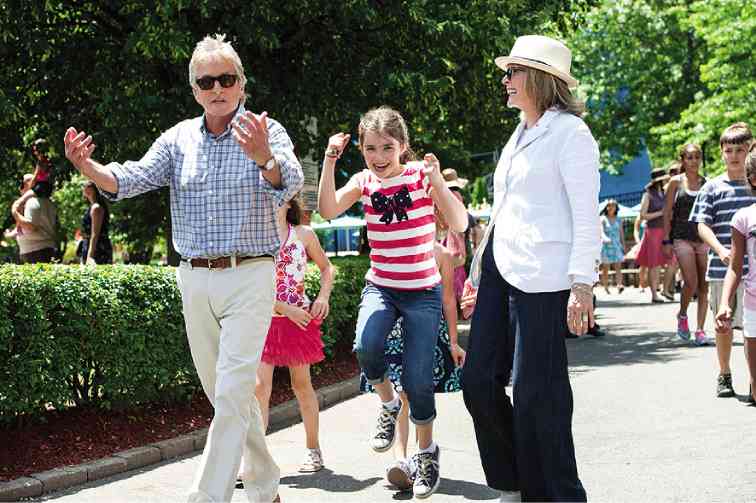 “AND SO It Goes” is directed by Rob Reiner, with screenplay by Mark Andrus.

‘And So It Goes’: A movie about second chances

The world of an obnoxious realtor gets turned upside-down when his granddaughter whom he never knew existed comes into his life.

Directed by Rob Reiner, with screenplay by Mark Andrus, “And So It Goes” stars Michael Douglas, who plays Oren Little, a once-successful real-estate broker who wants nothing more than to sell one last house and retire in peace and quiet. He is already widowed from the death of his wife from cancer several years ago. But his world is shaken when his son asks him to temporarily take care of his granddaughter Sarah (Sterling Jones).

Oren grudgingly agrees to take her in but quickly pawns her off on Leah (Diane Keaton). But Leah’s got her own path to figure out, trying to find her second act as a lounge singer.

Over time, Sarah’s need for love and affection bring the polarized pair of Oren and Leah closer and allow them to see different sides of one another.

The idea for the film came about during the press junket for Reiner’s 2007 hit, “The Bucket List.”

“Every single journalist asked the same question,” the director recalled, “’what’s on your bucket list?”

Reiner then recalled that his longtime producing partner Alan Greisman came up to him to suggest an idea for a movie about a “great romance.” It was then that Reiner was struck with the story of people finding each other at a certain point in life, a later point in life.”

Reiner, who had directed classics such as “When Harry Met Sally…” and “The Princess Bride,” knows about comedy, and he’s certainly proven that he knows how to successfully fuse humor and romance.

“I basically make the same movie over and over again,” Reiner laughs. “The woman is always more advanced and more developed and emotionally able. And the man is like an idiot running around, trying to figure it all out, until he realizes that he should be with the woman.”

Douglas was attracted to the project not only for the opportunity to work with Reiner again, but also by the script and the qualities of his character.

He added that he has always been attracted to characters that are not very attractive, but ultimately come around.

Keaton said the film was really about second chances.

“People get a second chance or a third chance or a fourth chance or a fifth chance, if you’re just willing to open up and take it and plunge in,” she said. “That’s what I love about the movie. It’s what I wish I could apply to my own life: I could have a lot of chances if I would just be more courageous in life and step out there. But we wall ourselves off sometimes when we get older, and it’s really important to try and take those baby steps and just keep confronting life.”

Reiner noted that the point of the film was that at any point in life one could still rekindle emotional feelings even after many years of isolation.

“At whatever stage of life, love is love,” Reiner said. “Those feelings don’t die. And you act like a teenager no matter what age you are.”

“And So It Goes” is showing exclusively at Ayala Malls Cinemas nationwide.