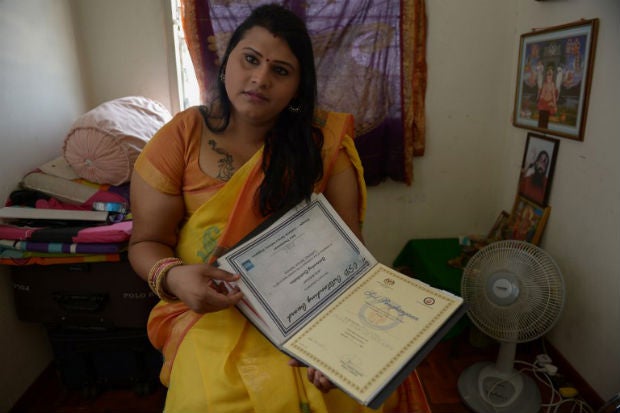 In a photo taken on September 23, 2014, Abinaya Jayaraman, a Malaysian Hindu ethnic Indian transgender, shows her certificates inside her room in Kuala Lumpur. Aryana had just returned to her home one night in June when Malaysian Islamic-purity enforcers burst in, ransacking her apartment and arresting her for cross-dressing. AFP

SEREMBAN — Aryana had just returned to her home one night in June when Malaysian Islamic-purity enforcers burst in, ransacking her apartment and arresting her for cross-dressing.

Using a pseudonym to protect her identity, Aryana is transgender — born a man but identifying as a woman — and part of a substantial community that complains of rising persecution in the Muslim-majority Southeast Asian country.

The 30 year-old was detained for several hours, during which she was roughly handled, pressured to confess and charged a fine.

“It’s difficult. When I wore men’s clothing, it felt like a lie,” said Aryana, a sex worker with long hair dyed reddish-brown and a heavily-powdered face.

But their lives are far different from the famously tolerant stance in Buddhist neighboring Thailand.

Human Rights Watch said Malaysia is one of the world’s worst countries for transgender people, as it released a report last week detailing social ostracism, discrimination, and harassment, sexual abuse and arrest by authorities.

Homosexuality is effectively banned in Malaysia. Gay sex — considered “against the order of nature” — brings up to 20 years in jail under federal law.

State-level laws on Islamic purity also criminalize dressing as the opposite sex, activists say. Violations can bring three years in prison and a fine.

Three transgender women who were arrested four years ago are now boldly fighting that in court via a lawsuit in the southern state of Negeri Sembilan that calls such rules discriminatory and unconstitutional.

Its chances are uncertain, but activists hope success will prompt scrutiny of laws in other states. A ruling is expected November 7.

“I hope for success. I have been waiting so long already,” said one of the parties to the suit, a slim 28-year-old dressed in tight jeans, sunglasses holding back reddish dyed hair, who asked to be unidentified.

Activists and transgender people say past attitudes were fairly tolerant in the historically moderate Muslim country.

But conservative Islam is growing due to a complex mix of factors.

Authorities have since taken a steadily harder line against transgenders and homosexuality, critics say. A gay rights festival was banned in 2011.

Prime Minister Najib Razak, who portrays himself as a Muslim moderate, has repeatedly said in recent years that gay and transgender rights initiatives were deviant.

Officials in Najib’s office, Malaysia’s attorney-general, and a government agency that polices Islamic conduct did not respond to AFP requests for comment.

Human Rights Watch’s report urged the repeal of all discriminatory regulations, saying transgender people are at constant risk of mistreatment by authorities.

In June, 16 transgender women were arrested in a raid on a wedding party in a private home in southern Malaysia. They were sentenced to a week in prison and fined.

Some transgender people are sent for “counseling” sessions on “moral values”.

Nisha Ayub, now a Muslim transgender activist, said after she was arrested in 2000 that a jailer took her from cell to cell to show male inmates her breasts. She was later molested by prisoners.

Those who opt for sex-change surgery encounter a bureaucratic nightmare, unable to legally change their names and genders, complicating access to public services.

Others complain of discrimination in employment and other spheres.

But the price of acceptance is self-denial — they typically wear gender-neutral clothes, such as pants and shirts, with long hair tied back conservatively.

Deprived of jobs, many are pushed into sex work, risking sexually-transmitted disease.

Abinaya Jayaraman worked at a bank but left when her employer demanded she dress as a man and use the men’s toilet.

A Hindu ethnic Indian with long hair and dressed in a bright yellow Indian sari, Abinaya said she turned to sex work for 30 ringgit ($10) per encounter to survive.

Abinaya had sex-change surgery in 2011 and has found stability working with a local NGO that helps the transgendered.

But her pain lingers. She was sexually abused as a child by a relative, and is now estranged from her family over her lifestyle.

“Here we live in fear. We are treated as criminals. We are not treated as humans,” Abinaya said.

UN: HIV may afflict almost half of Asia-Pacific transgenders