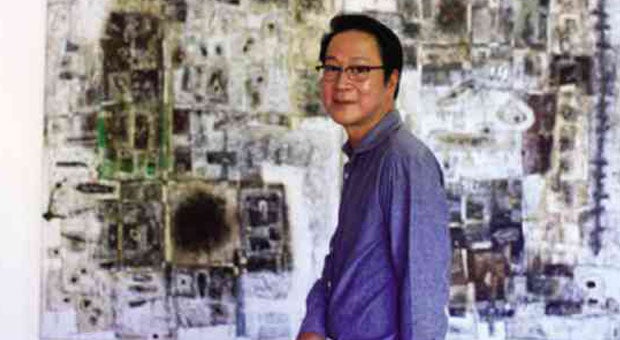 Jojie Lloren aims to wow his audience with minimalism, not bling

Designer Jesus “Jojie” Lloren is racing against time. With less than three weeks before the Red Charity Gala on Oct. 18 at Makati Shangri-La’s Rizal Ballroom, he still has 10 dresses to finish.

“I’m nearly 75 percent done,” said Lloren, who will show a 40-piece collection inspired by paintings of Filipino masters Luna, Amorsolo, Hidalgo, Edades, Manansala, Magsaysay-Ho and Zobel. “But progress has been very slow because I have only two sewers.”

We caught him one morning at his atelier in Pasay City. In a private compound, Lloren’s place is one of several nearly identical two-story high-ceiling houses built in the 1950s.

A native of Pateros, Lloren considers his Pasay address a second home.

He’s no stranger to pressure and big solo shows. At his first gala some years back, he presented a 35-piece collection.

But a lot is at stake in the Red Charity Gala, an annual fundraiser mounted by Tessa Prieto-Valdes and Kaye Tiñga for the Philippine Red Cross and the Assumption High School Batch

Apart from donating to their select foundations, Valdes and Tiñga will also hold a special auction during the dinner show to raise money for survivors of Super Typhoon “Yolanda.”

Most of this year’s proceeds will go to building homes for 20 families in Samar.

Except for Lustico, all previous Red Charity Gala designers first became famous abroad, catering to the Middle East royalty and elite, particularly in Dubai. Comparisons will be inevitable.

“There’s so much pressure, given that the five are terrific designers whom I respect,” said Lloren a few weeks ago at a Red Charity Gala press conference at Makati Shangri-La. “I’m not here to top them or to outdo them. Every time I do a show, I just try to outdo myself.”

In fact, Lloren could just be talking bold. In an exclusive interview with Inquirer Lifestyle, he admitted that he wasn’t sure how the audience would react to his designs.

“If the same group of people would attend this year, they’re used to seeing rhinestones, glitter and beadwork,” Lloren said, referring to his Dubai-based colleagues’ penchant for bling. “And resorting to heavy embellishments is not my style.”

Lloren decided to be true to himself when he agreed early this year to be the Red Charity Gala’s featured talent.

Known for minimalist aesthetic and impeccable tailoring, Lloren got his big break when he won the Philippine Young Designers Competition in 1998.

His entry, a long dress with an abaca bodice that resembled a shiny armor, won the Concours International des Jeunes Createurs in Paris that same year.

As part of his prize, the B.S. Clothing Technology graduate of the University of the Philippines received a scholarship from the Ecole de la Chambre Syndicale de La Couture Parisienne. The experience honed his skills to the finer points of French couture.

“People who come to me aren’t expecting me to make fully beaded numbers,” he said. “They know my aesthetics—simple and hopefully clean, well-constructed clothes.”

But clean and simple won’t suffice this time. Since people are paying to watch the event, Valdes reminded Lloren early on that he needs to “wow” them.

All but one of his 40 pieces will be inspired by paintings. But the finale will have no references to any artwork.

It won’t be a literal interpretation of paintings, he clarified. He won’t be dyeing or hand-painting fabrics either to replicate an artist’s work on such fabrics as silk, neoprene, piña and chiffon.

Instead, Lloren would try to capture the essence of the artist’s style on canvas—from his moods to his brushstrokes.

Amorsolo, for instance, is known for his idyllic countryside scenes. When Lloren asked an art critic friend what else the painter is identified with, he was told that Amorsolo’s paintings have a unique luminescent quality. The master loved to play with light and shadows.

“Those qualities are what I would try to distill to produce clothes inspired by Amorsolo,” he said.

To make things more interesting, Lloren won’t do line designs or stick to a key look, but rather do 40 different and unrelated pieces.

“Like what I did in my first solo show, there won’t be any repeats or similar looks,” he said. “I’ve been experimenting a lot lately. I think this collection is already a summation of my life as a designer. And you know what? I’m beginning to run out of tricks.”

To focus on the collection, Lloren made a painful but necessary decision to temporarily close his shop to the public in June.

“These days, it’s just me and my two sewers working on the collection,” he said. “So far, I’ve been able to manage. Just don’t remind me of the monthly

It’s a good thing he also has another job as Rustan’s ready-to-wear designer for Jill and Luna. The labels consist of dresses and separates that appeal to more mature women, particularly working mothers, ages 25 to 65.

“Working with RTW has been a learning experience, too,” said Lloren. “When I first joined Rustan’s four years ago, I was given a free hand to do anything. It doesn’t work that way.”

His first collection, dubbed “blobby tecture,” was too radical for Jill and Luna’s core clientele. Instead of going up, sales went down.

Lloren was already bracing himself for the pink slip.

“Since I was now dealing with a mass market, I couldn’t impose on them what I wanted,” he said. “Through our merchandisers and salesladies, I have to listen to what women want.”

Lloren went back to Jill and Luna’s core looks before slowly introducing changes in succeeding collections. Sales gradually picked up, to his relief.

“When it comes to RTW, the winning formula would be to listen first to your merchandisers,” he said. “If a collection doesn’t sell, it’s not solely the fault of the designer. Merchandisers have a bigger role to play because they’re the ones in the position to tell the designer what clients really want.”