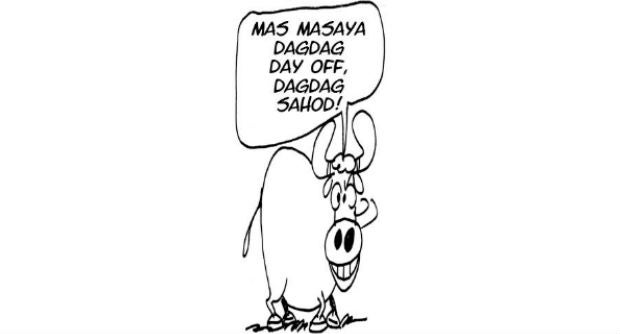 Here is one labor expert who believes a four-day workweek is the way to a happier, healthier society.

If you are not sold on the idea, why not also ask some Japanese and Korean workers.

Some militant groups, like Kilusang Mayo Uno (KMU), may not agree with that but Jon Messenger of the International Labor Organization (ILO) says there are many good reasons for moving toward a shorter workweek.

In an article posted on the ILO website, titled “5 good reasons for working 4 days a week,” Messenger said a four-day workweek “is the next step in the long road to a happier, healthier and more sustainable society.”

Messenger was team leader of the ILO working group that drew up the report.

“I’ve been studying working hours since I joined the ILO in 2000 and I’ve never seen anything like it: article after article touting the benefits of a reduced workweek,” Messenger said.

“If you ask me, the idea of cutting back the workweek has finally reached critical mass. But it’s hardly a new idea—there are a lot of good reasons for moving towards a shorter, four-day workweek.”

The four-day workweek scheme approved by the Civil Service Commission would mean longer working hours for state employees—from 8 a.m. to 7 p.m. with a one-hour lunch break—either from Tuesdays to Fridays or from Mondays to Thursdays.

But the new schedule has been criticized by some organizations—including the labor group KMU—which said longer working hours would put the health of government employees at risk.

“Working too much is bad for one’s health … The costs of long working hours in terms of occupational health and safety are staggering,” he said.

He cited cardiovascular diseases, gastrointestinal and reproductive problems, chronic infections, mental health problems and even death as among the health risks faced by overworked people.

“If you don’t believe me, ask workers in Japan and Korea, where words like ‘karoshi’ and ‘kwarosa’—which literally mean ‘death from overwork’—are part of the everyday vocabulary,” Messenger said.

“Studies have identified regular long working hours as an important predictor of work-life conflict,” he said. “This may sound obvious, especially to anyone with kids or elderly parents to care for, but the facts show that long workweeks can lead to more stress and anxiety at home.”

“In fact, a new study has shown that a shorter workweek was directly related to an increase in overall life satisfaction, or ‘happiness,’” he added.

A shorter workweek would also create more and better jobs.

“While some people are working too much, others aren’t able to work enough—namely those part-time workers who would prefer full-time jobs,” Messenger said.

He said that during the global economic crisis, some policies in Germany encouraged companies to reduce working hours instead of cutting jobs.

“Instead of laying off 20 percent of the workforce, employers could reduce working hours for all workers by 20 percent—from five days a week to four,” Messenger said.

“Similar measures can be used in good times as well,” Messenger said. “For example, when the legal workweek in Korea was cut from 44 to 40 hours per week, there were increases in employment and productivity.”

One Filipino group opposes the new work schedule, saying it would have a bad effect on the “work-life balance” as workers would end up some days spending more hours at work than with their families.

Also, it may result in a decrease in productivity and leave workers more vulnerable to criminals as they would be going home late from work.

For Messenger, people are more productive when they work less.

Good for business, too

“It’s simply not true that long working hours equal high productivity. On the contrary, many of those countries where workers work the longest have relatively low labor productivity,” he said.

He stressed that shorter work hours had been shown to boost workers’ motivation, lower absenteeism, reduce the risk of mistakes and accidents, and discourage employee turnover.

“Cutting the workweek isn’t just good for workers, it’s good for businesses, too,” he said, adding that working less would also be good to environment.

“It’s pretty clear that the more we work, the bigger our ‘carbon footprint’ will be,” he said. “Cutting back on the number of days that we work—and thus the number of times that we have to commute from our homes to our workplaces—is bound to save energy, reduce carbon emissions and ultimately make for a ‘greener’ economy.”

“There are a lot of good reasons for … moving to a shorter workweek. If the workweek is already five days—as it is in most advanced economies— then moving to a four-day workweek doesn’t just make good sense, it is the next step in the long road to a happier, healthier, and more sustainable society,” he said.