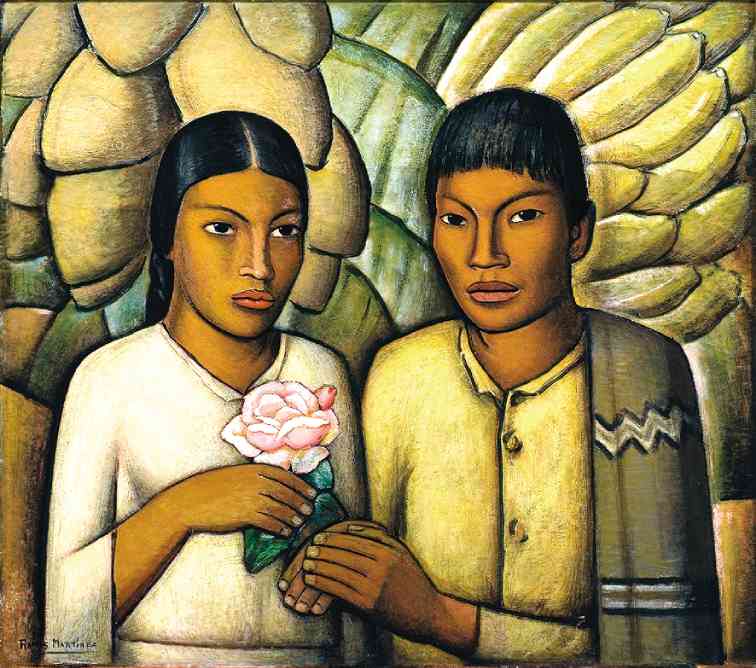 Mexican exhibit unfolds the art of the marvelous

Some years ago, we saw an extensive exhibition of Mexican art in Singapore, and we could only ruefully ponder how and why the island-state beat us to it when we had a special relationship with Mexico for centuries while Singapore was still a backwater.

It is rather strange that, after nearly four centuries of almost continuous interaction with that South American country, we are seeing only now the first exhibit of Mexican art in this country.

“According to Femsa, this is the first major exhibit from their collection—and it is here in the Philippines!” says Ayala Museum senior curator Kenneth Esguerra, sounding as if he couldn’t believe our luck. “They do lend artworks for exhibit, paisa-isa. But a lot like this, it’s the first time.”

He points out to the 1933 Kahlo piece in oil and collage on masonite framed in true-vue glass, which had been loaned to shows in Rome and Vancouver, and probably Hong Kong after this show.

During the press preview, Mexican Ambassador Julio Camarena-Villaseñor said the exhibit was especially curated for the Philippines by Femsa, which has the most extensive Mexican art in a private collection.

Founded in 1890, Femsa is the largest franchise bottler of Coca-Cola products in the world, and owns the second-largest equity stake in leading brewer Heineken. It established the Femsa Collection in 1977, and has since gathered over 1,200 pieces of modern and contemporary Latin American art of various disciplines, from painting and sculpture to drawing, photography, video and installation, with a strong emphasis on Mexican art.

As part of its commitment to “simultaneously create economic, social and environmental values in the communities where it is present,” it shares a selection from its collection through art loans and has organized some 100 exhibitions in cities in America, Canada, Spain, and now in the Philippines. So, what made it decide to mount the exhibition in the Philippines?

“Femsa is [located] in nine countries in Latin America, and two years ago it settled also in the Philippines,” says the exhibit’s Mexican curator Emma Cecilia García Krinsky. “For the first time Femsa is present in Asia. This important relationship with the Philippines was definitive in creating a project that would offer important cultural and social values. It is through Mexican culture and art that we will start promoting social values.”

She says it took them a year and a half to organize the exhibit, from conception to shipment. The more difficult part is the latter.

“No doubt there is a long distance between Mexico and the Philippines, so we had to plan an effective strategy to ship the [artworks] in the safest way,” she says. “Unfortunately there was no direct trip, so the collection had to cross other countries before its arrival, which, due to our [efforts] in Mexico, was successful.”

The exhibit is divided into seven chapters: “The European Experience”; “The Landscape”; “Vanguards”; “The Marvelous Real, Surrealism Avant la Lettre”; “The Arrival of European Surrealism”; “New Trends in Mexican Plastic Arts: The Rupture”; “The Portrait.”

The Mexican School of Painting and all major art movements sweeping postrevolutionary Mexico are richly represented here by 63 artworks in various mediums. Many of the pieces are complemented by portraits of the artists, in gelatin silver print, often taken by renowned Mexican photographers.

Occupying pride of place by the entrance are large-scale pieces in pyroxylin on masonite of a characteristically dark-themed Orozco and a Mexican-motif Siqueiros, and an early Cubist Rivera in oil on canvas.

Murillo is at the rear of the gallery, but his dried-up cornfield goldenly glowing in the shadow of Popocatépetl can’t be missed.

Kahlo is somewhere on a corner but hers is probably the most important piece in this show, as it is her only painting in which she doesn’t appear, says Esguerra. It is still part of her visual diary, but, instead of a self-portrait, it shows her Mexican dress hanging amid the skyscrapers of New York. Esguerra says the relatively small piece was flown in to Manila in a crate within a crate.

Aside from the representative pieces of the five Mexican National Artists, there are numerous grabbers in the gallery, among them: Rufino Tamayo’s very red watermelons; Juan O’Gorman’s “The Myth”; Carlos Mérida’s lacquered mural on solid mahogany plank; Pedro Friedeberg’s wall relief of miniature wooden hands and Op Art geometrics; “The Pearl,” photo serigraphy on paper by the filmmaker Gabriel Figueroa.

From Femsa’s extensive collection, how did the curator decide which artworks to include in the show—for instance, which Rivera? which Kahlo?

“From the very beginning, the idea was to show the history of Mexican painting during the first half of the 20th century,” says García Krinsky. “The works were selected according to their importance and according to the Mexican artistic trends. So it is very important to start with a painting of Diego Rivera during his Cubist period, which was very important for his later participation in muralist painting.

“With regard to Frida Kahlo, her work is important to show because of the way she represents her Mexican tradition and her own feelings. Besides, we were planning a chapter dealing with Mexican Fantasy and Surrealism, and she had the characteristics to be included in this chapter. The rest of the artworks were carefully selected in accordance to the theme of the exhibition.”

One of the artists included, Urueta, is an aunt of Ambassador Camarena-Villaseñor. She is said to be legally blind, and that determines the colors and shapes on her canvas. This can be observed in her representative piece, which takes on Gauguin’s earthy tonality, bold lines, broad color planes and black holes for eyes.

The ambassador saw a lot of similarities in Mexican and Philippine art, in their motifs and festive colors, with the only noticeable difference in the way of capturing light. He pointed out the hazy quality of Philippine sunlight.

The similarities extend to other aspects of cultural life. Filipino language, for instance, is 80 percent Spanish-based, of which 20 percent are Mexican words. Mexican influence on Philippine culture was strong in the first 250 years of the galleon trade between Manila and Acapulco (lasting 350 years).

The bind is so strong that, in the aftermath of Supertyphoon “Yolanda” late last year, the Mexican government immediately donated $1 million to the Philippines, which became a benchmark for latter donor countries.