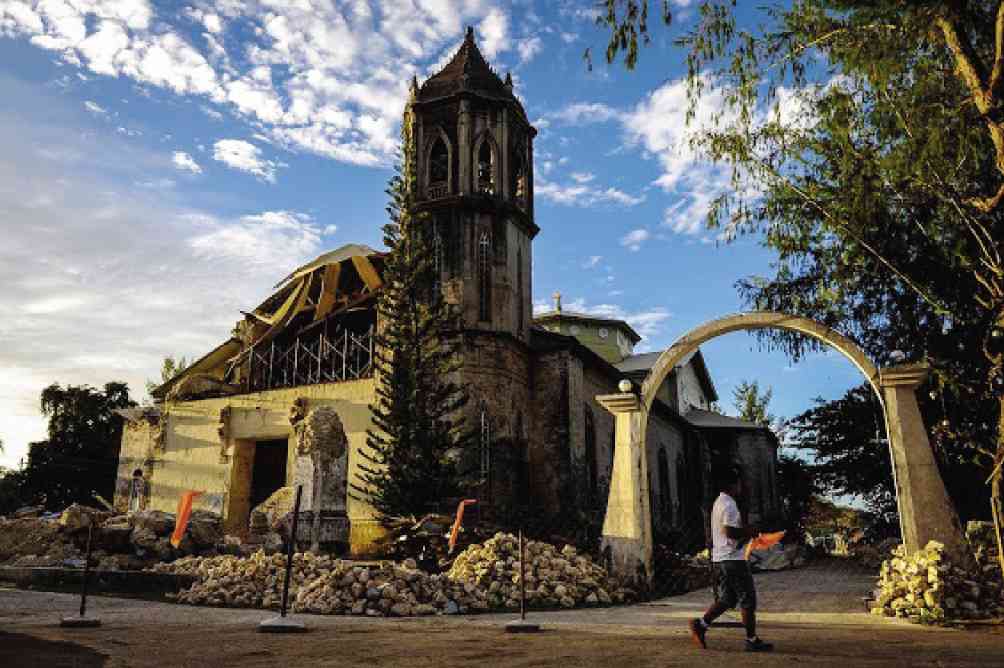 Rehabilitation of the heritage churches and other important cultural properties damaged by the Oct. 15, 2013, earthquake has resulted in a remarkable show of coordination among the key cultural agencies of the government, as well as very close cooperation between the local and national governments, the Catholic Church, and local communities.

The Bohol Heritage Task Force created immediately after the earthquake is still on prerestoration stage as the detailed engineering studies (DES) of structures have yet to be finished.

The task force is composed of the National Museum (NM), National Historical Commission of the Philippines (NHCP), National Commission for Culture and the Arts (NCCA), the Catholic Church, and concerned citizens groups.

In a press conference last Friday at the NCCA, the heads of cultural agencies presented updates on the rehabilitation of Bohol heritage structures.

Prerestoration work is important because it will identify the “strength of the structure’s foundation and kung may tubig pa sa ilalim o may cavity (if there’s still water or cavities under the structures),” explains NHCP Chair Ma. Serena Diokno.

NHCP is assigned to the ancient churches of Baclayon, Loay, and Dauis, and all church sites in Cebu, while NM is tasked with the rest of Bohol’s churches, as well as with Guiuan Church in Eastern Samar and Lazi in Siquijor.

The Cebu structures, notably the Basilica Minore de Santo Nino de Jesus, were damaged if not destroyed by the earthquake. Along with the Guian and Siquijor churches, they were also severely damaged by Supertyphoon “Yolanda” last November.

Aside from cleaning the structures of debris, bracing and shoring were done to preserve the ruins, says Diokno.

Diokno adds that the mayor of Baclayon constructed an alternate route so that vehicles would not have to pass in front of the church and aggravate its delicate condition.

NM assistant director Angel Bautista, meanwhile, says the retrieval of movable and immovable cultural properties and the cleaning of sites assigned to the museum were already complete except for Loon (70 percent of the work has been finished), Maribojoc (70 percent) and Loboc (90 percent).

Bautista says NM had also undertaken geological assessment, set up a system against the illicit traffic of cultural properties, and conducted capability-building workshops for locals to help in the recovery of liturgical objects.

He says the Panglao watchtower is undergoing restoration while the old Bohol Provincial capitol building is set to be reinforced.

Bautista says a satellite branch of the Escuela Taller in Intramuros is going to open in Bohol to teach local the reconstruction of churches employing traditional methods.

In a separate interview, Fr. Milan Ted Torralba, executive secretary of the Catholic Bishops’ Conference of the Philippines Permanent Committee for the Cultural Heritage of the Church, says the Bohol rehabilitation project is divided into three phases with an initial government subsidy of P650 million.

Phase 2 includes a series of expert meetings or conferences and stakeholders’ consultations.

Diokno says NHCP would conduct material characterization of stones to better understand the construction materials used in the ancient structures.

The plans will be discussed in a consultation meeting with the NM, NHCP, the dioceses and parishes, local government units, and other concerned groups, says Fr. Torralba, himself a member of the clergy of the Diocese of Tagbilaran in Bohol.

The last phase is the actual restoration or reconstruction work. Torralba says he expects the third phase to commence first quarter of next year.

An experts conference program is going to be held on Nov. 17-21 to discuss approaches to be undertaken in the restoration process.

The experts meeting is going to be the start of the second phase of the rehabilitation program, which will have an additional budget of P1 billion next year, to be shared between NHCP and NM.

“The goal is to produce a sound restoration plan based on scientific findings and considerate of the needs of communities and stakeholders,” says Fr. Harold Rentoria, OSA, head of the NCCA Subcommission on Cultural Heritage.

“After the expert conference, we are going to gather all the results, recommendations by the experts, then we will be going to consolidate all the data and results,” the Augustinian priest says. “We are going to call for a meeting to come up with the Philippine standard for conservation.”