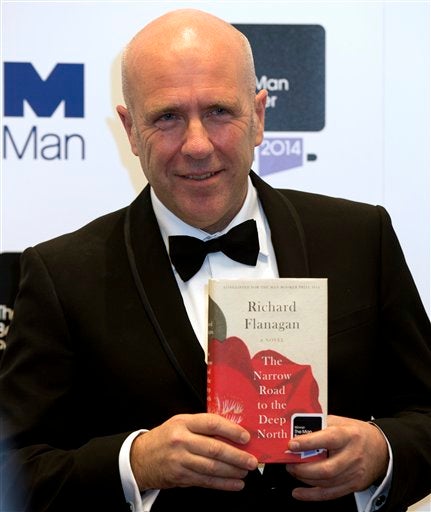 Winner of the Man Booker for fiction 2014 Australian author Richard Flanagan, author of 'The Narrow Road to the Deep North', poses for the camera after winning the prize at the Guildhall in London, Tuesday, Oct. 14, 2014. AP

LONDON — Australian literature-lovers cheered Wednesday after Richard Flanagan won the prestigious Booker Prize with a visceral story of wartime brutality and its aftermath — a novel the head of the judging team said was as powerful as a kick in the stomach.

The country’s government may be less pleased. Flanagan in a post-awards interview that Prime Minister Tony Abbott’s environmental policies made him “ashamed to be Australian.”

Flanagan drew on his father’s experiences as a World War II prisoner of the Japanese for “The Narrow Road to the Deep North,” which centers on the Burma Death Railway, built with forced labor at the cost of tens of thousands of lives.

Named after a classic work of Japanese literature, the book is dedicated to Flanagan’s father — referred to by his prisoner number, 335 — who died at the age of 98 shortly after his son finished the manuscript.

Flanagan said that he and his five siblings grew up “children of the Death Railway. We carried in consequence many incommunicable things.”

“I realized at a certain point if I was to continue writing I would have to write this book,” said Flanagan, whose credits include five previous novels and work on the screenplay to Baz Luhrman’s “Australia.”

Flanagan said he had written five failed versions of the novel over 12 years, and burned them all. He said the finished book was not his father’s story, “because that would have been a failure. … He trusted me to write a book that might be true.”

Philosopher A.C. Grayling, who chaired the panel of judges, praised the “profoundly intelligent humanity” and “excoriating” descriptions of suffering in Flanagan’s novel.

Grayling said it was “the sort of book that kicks you so hard in the stomach” that it is difficult to move on.

Flanagan, 53, was given his trophy and 50,000 pound ($80,000) winner’s check by Prince Charles’ wife Camilla, Duchess of Cornwall, after a black-tie dinner in London’s medieval Guildhall. He greeted the royal with a protocol-busting hug. “Well, she seemed a sweet woman and she was very nice,” Flanagan said.

In a BBC interview, Flanagan was asked about Abbott’s recent comment that “coal is good for humanity.”

He said he felt the government was “committed to destroying” Australia’s unique environment.

“To be frank, I’m ashamed to be Australian when you bring this up,” Flanagan said.

Flanagan is the third Australian Booker winner, after Thomas Keneally and Peter Carey, and his victory disappointed those who hoped to see an American win in the first year US authors are eligible.

This was the first year writers of all nationalities have been eligible for the Booker, previously open only to authors from Britain, Ireland and the Commonwealth of dozens of former British colonies, including Australia.

US writers Joshua Ferris and Karen Joy Fowler were among the six finalists, along with Flanagan and Britons Ali Smith, Howard Jacobson and Neel Mukherjee.

Winning the Booker guarantees a boost in profile and sales, and can transform careers. When Hilary Mantel won for “Wolf Hall” in 2009, she went from modestly successful novelist to literary superstar.

Some British writers had expressed fears that the change in eligibility could lead to U.S. dominance of the 46-year-old award, officially named the Man Booker Prize after its sponsor, financial services firm Man Group PLC.

Flanagan said boundaries had no place in literature.

“To talk about Australian novelists makes as much sense as talking about Angolan chiropodists to me,” he said.

Man Booker Prize winner is big on greed and love