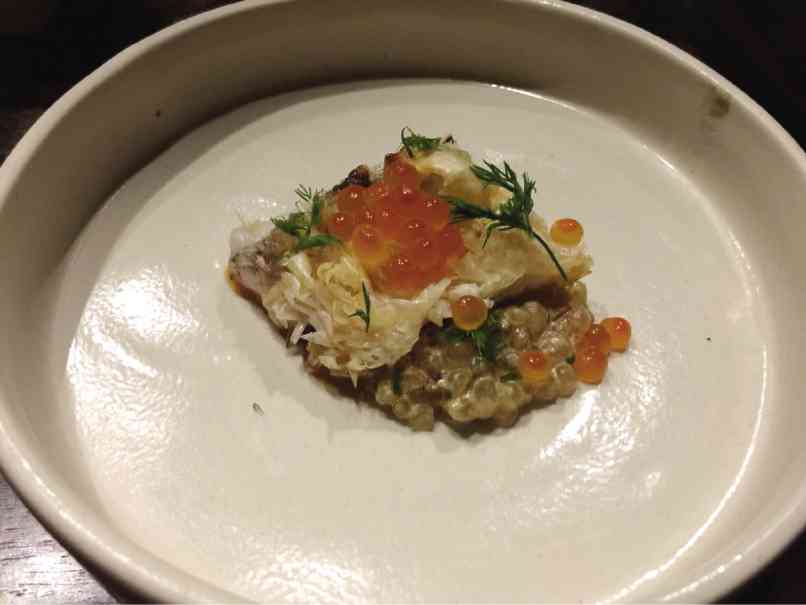 More than a few people may confuse fine dining with expensive dining. It’s true that, until recently, most fine-dining places had starched white linen tablecloths, waiters in dinner jackets and a silver candelabra; it was in these palaces that well-trained chefs at the top of their profession made their mark.

The bill was almost always eye-wateringly expensive. If you were lucky, the chef would be worthy of the palatial surroundings and serve a meal that you would remember decades hence.

But more and more, the chefs at these restaurants made you feel that your money was going to the flowers, the curtains and the waiters’ uniforms. They were still ideal places for proposals, but it would be over mediocre food with very long names.

I’m not sure that you would choose to propose marriage at Mecha Uma, if only because the diners at about five neighboring tables would be listening in as well.

The place is small, and the tables packed closely together. The vibe is casual and unadorned, though by no means slapdash; the restaurant is laid out like a sushi restaurant, with tables at the counter, though instead of one wizened sushi chef plying his trade, an entire kitchen had been shoehorned into the tiny space. And a full staff was grilling, plating and sweating as the seats filled up over the course of the night.

More and more, the most creative chefs are choosing to ply their craft at places like Mecha Uma. But for people who have reserved months in advance and flown in for their dinner, the lack of pomp can be disconcerting.

I personally don’t mind it; it lets me concentrate on the food rather than whether I’ve dribbled tomato coulis on my tie. It also makes me feel that the bulk of my money is going to the food, rather than to the furniture.

I’m not going to do a blow-by-blow account of the degustation; it would be terribly cruel to the reader. And also because at a certain point I stopped counting the number of courses, and even forgot to take pictures, and simply reveled in the sensory overload of the plates that were being put before us.

I’ve said in the past that these days I tend to avoid degustation-style meals because you so often find yourself held hostage by a chef who feeds you little morsels over the course of long, drawn-out hours. In this case, don’t hesitate for a moment and go for the full ride.

The chef, Bruce Ricketts (whom I’ve reviewed previously, as proprietor of an even smaller restaurant, Sensei in BF Homes), came over and explained how each dish was put together, which was interesting for me because I like to understand the way a chef thinks and what his intentions were in putting a dish together.

But just as one doesn’t have to understand the mechanics or know the displacement of a car to know that it’s a fine ride, the introductions are superfluous. The flavors were complex,

poetic and modulated; and each course that progressed naturally from the previous one had the logical sequence of a dream.

The food defies easy genres; it is vaguely Japanese, but nothing more—this is not where you go for unlimited tempura.

The first part of the meal is largely seafood-based, with small plates of fish, or scallops, or oysters and fish sperm and uni on toast, usually with an unexpected accompanying starch (sago balls, in one instance), or a startling sauce (fermented watermelon).

Just when you’re wondering how many more of these could emerge from the tiny kitchen, the focus shifts from aquatic to terrestrial, with sous vide pork (with blood and gooseberry sauce; perhaps the only dish whose flavors were not as clean and defined as they could have been), lamb on polenta, which is then followed, after a palate cleanser, by a karate chop to the palate and arteries, of grade A5 (the highest) wagyu beef, grilled over charcoal.

By this time I was having trouble moving, and it was with great relief that we were brought the final course, a carrot cake dessert with fennel and candied baby carrots.

My tastes tend to veer toward simple food, well-executed, rather than complexity; but this is largely because most attempts toward complexity fall flat, and one is left with the nail-biting horror of a brave leap that falls short of its mark. And then as a diner you have to eat the unfortunate mess.

But here, with dish after dish, Ricketts gets it right. The result is a hallucinatory journey whose only reason for ending is so that you can start again.

Great praise can damn a restaurant as much as a negative review: Customers tend to expect too much, the chef peaks too early and the most difficult reservation in town can turn ghoulishly empty if people decide that it’s an experience rather than a dining place, and once they’ve “done it” they don’t return.

Early acclaim can sap inspiration and make one timid and afraid to innovate. The future of a restaurant with creative ambitions this high depends entirely on how the chef can turn an intense (and, admittedly, expensive) gastronomic experience into a dining place that people are willing to return to frequently.