Take it from H&M: Fashion is no longer that fast | Inquirer Lifestyle ❮ ❯ 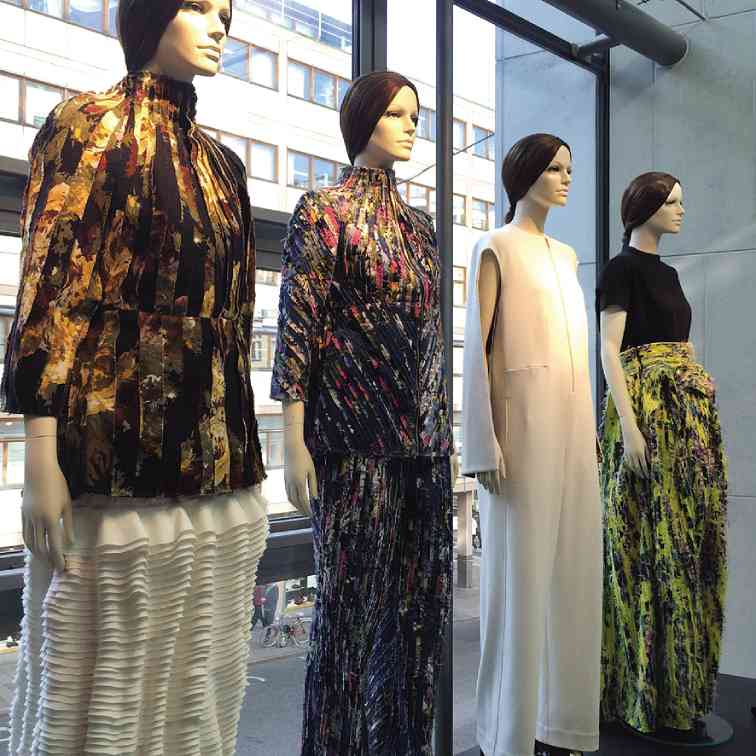 Take it from H&M: Fashion is no longer that fast

The concept of “fast fashion” is on the wane, if the designers of one of the world’s biggest high-street fashion brands are to be believed.

Make no mistake: When H&M opens its first mega store in Manila today, Oct. 17, Filipino customers will get their fill of the latest trends for the season from the Swedish fashion behemoth: cable knit sweaters, coats and treggings (leggings-like trousers) for the ladies, and slim-cut chinos, knit cardigans and hoodies for men.

But while these items may be fine examples of what’s hot and on trend for the fall fashion season, the designers of H&M say that so-called trendy pieces now tend to stay in people’s wardrobes longer than they used to, even making brands such as H&M cater to such market wants for several seasons at times, also longer than typical.

“Fashion is no longer that fast, really,” said Ann-Sofie Johansson, H&M head of Design New Development, in a recent interview with Filipino journalists in Stockholm. “Trends tend to

linger on for a longer time. It makes fashion more liberating and fun. They don’t just come and go now.”

While styles that end up on store racks, such as at the three-level, 3,000-sq-m H&M flagship store to open at SM Mega Fashion Hall this Friday, have many influences (runway, street, among others), global retailers like H&M rely “more on selling figures,” according to head men’s wear designer Andreas Lowenstam, and what sells define what items they should fill the racks with more.

At the Stockholm headquarters, we noted at least two walls in separate offices bearing products numbered 1 to 10 (a white button-down shirt, denim jeans, socks), to denote the top-selling items, globally and locally.

Johansson said that for a long time, they were trying to push skinny trousers, but they never took off.

“Now we can’t get rid of it,” she added with irony. “It takes a long time to change a silhouette. It will be a few seasons where you will see a spread of different silhouettes of trousers. Maybe it would move to flares again.”

The same goes for men’s wear. “We only sold boot-cut jeans for men for a long time,” said Lowenstam. “Now it’s more individual.”

When they want to push for a certain style, they try it first in a few stores, hoping it will pick up. This time, it’s the bomber jacket and the turtleneck; the latter, Lowenstam admits, is a rather difficult style to pull off.

“Fast fashion” is, of course, a pejorative term for brands like H&M, as it connotes cheap, low-quality clothing that caters to the masses’ demand for instant gratification. Its designers, however, insist that H&M works on one business concept alone: Fashion and quality at the best price.

“When you work as a designer at H&M… the business idea is the backbone,” Johansson said. “We have been around for [67] years. We have a lot of knowledge and experience in the

field. We play big volumes. We are in 54 countries”—the Philippines is market No. 55—“and we have only a few middlemen. We are cost-conscious.”

She added, “We can work with low, middle and also high prices. And it’s always a good deal.”

And even at lower prices, it should always be a “wow product,” said Johansson. Even as the basics and classic styles tend to sell more, there’s effort to make them “seasonal” and updated, “or else it’s boring,” Lowenstam noted.

“When they say don’t throw something because the trend will come back, for sure when flared jeans come back I can’t wear the old ones because it will be a different flare,” he said.

The now global chain was in only six countries when Van Den Bosch started in the company. There were only seven designers at H&M. Now there are nearly 200 designers in the team, founded by a man named Erling Persson in Sweden in 1947.

When the collaboration with Alexander Wang rolls out in November, Manila will get dibs at the same time as the rest of H&M’s 54 other markets. This team-up with the Balenciaga designer is one of H&M’s most awaited designer collaborations, which began with Karl Lagerfeld 10 years ago.

“We’ve been turned down, and yes, we’ve turned down some, too,” Van Den Bosch said of the collaborations, which have included Stella McCartney, Viktor & Rolf, Comme des Garçons, Martin Margiela, Lanvin, and even Madonna. The style advisor said the Versace and Isabel Marant collections are considered the most successful as they sold out quickest.

But “all sold well,” she said.

At H&M stores, there’s never a surplus as “everything goes,” meaning, whatever doesn’t sell goes on sale.

When we met with the designers, they were already working on the trends collection for Fall 2015, a full year in advance. Accessories, underwear and swimwear take a longer time to develop, according to Van Den Bosch.

Collections are rolled out in several drops each season, and they add to the assortment during the season depending on market demands—say, a new color or a different print for a best-selling item. They can replenish an extra demand for a jersey dress, for instance, but designing a new jacket may take longer.

“We are fast, but not so fast,” said Johansson.